2019 KIMMIE Awards, Co-Host Kiana Dancie Shares What You Can Expect to See at the Fifth Annual Event & More!

The Kiana Dancie was born in Cleveland, Ohio but was raised in the city of Atlanta, Georgia! The actress and comedian was a co-host on TV One’s nationally syndicated talk show Sister Circle and is the new franchise owner of 2 CPR-Cell Phone Repair locations.

Dancie’s most recent role is coming up in just a week as she will co-host alongside artist and comedian Headcrack at Sheen Magazine‘s fifth annual KIMMIE Awards! We sat down with our lovely host to discuss what attendees can expect to see at this year’s festivities, and where she hopes to see herself in the years to come!

Tell us what made you want to get into the entertainment industry?

I started my life not really know what I wanted to do. I went to Georgia Southern University where I was a Hope Scholar; I graduated working for Sony, and then on to Samsung Telecommunication. The goal for me was to just figure my way out and not have to rely on my family. I actually took the LSAT because I thought I wanted to go to law school, but then I realized that it sounded like real work (laughs). Once I got hired with Samsung, I moved to Houston and it was an amazing opportunity, I learned a lot about working in Corporate America and about myself. One of the biggest things I learned was that I didn’t want to do it anymore! Before getting laid off from Samsung, I began dabbling with stand up comedy. I took all my experience in dating and being a young woman in corporate America to the stage and people were really amused, or they just could really relate to what I was sharing. I had always been in entertainment. I was a tap, ballet and African dancer as a child. I was in multiple plays and I modeled in JC Penny’s and Sears catalogs. It was just one of those things that was natural to me. My family used to call me Radio because I was talking just to talk (laughs).

You tap into not only acting but comedy as well! What’s it like being a female in the world of comedy?

Being a comedian period can be hard period! You want to be able to make people forget everything, including all of their problems and make them laugh. Sometimes it’s hard to do. Some people think they’re funny, so they really do try you, but once you put them in front of an audience, they bomb. As a stand-up comedian, my goal is to get you to see things from a different perspective and laugh. Laughter is the best medicine. I am rewriting a book that I began two years ago. I got the bags under my eyes removed and as I was healing, I actually decided to take the emotional baggage that I was dealing with and heal from that too. The name of my book is “Bye Bye Bags, Laughing to Lighten the Load,” I used laughter to heal myself whole. I am a child molestation survivor. I’ve lost friends, been cheated on and even lost what I thought was the love of my life and being a nationally syndicated talk show host on Sister Circle because, for whatever reason, it just wasn’t my opportunity anymore. We’ve all been through things and we’ve all carried baggage but the goal is to not allow that baggage to hold you back or down. As a stand-up comedian, my goal is to help you forget about your worries. I always tell people they don’t know what it is to be a female stand up comedian until you are one. It can be a dark environment. Many times, the conversations are inappropriate, there is always you and the guys. You’re basically playing in their field, in their sport. It may make you feel some type of way but you have to be strong and put your foot down about not allowing the guys to take advantage of you and your sexuality. They will try you! You have to ALWAYS be strong and not get caught in the ”He’s cute! He’s nice!” drama! They will all have sex with you. They will all sell you a dream! You can’t allow yourself to get caught up in screwing your self to the middle, trying to screw yourself to the top!!

You will be co-hosting Sheen Magazine’s 2019 KIMMIE Awards alongside Headcrack! What can the audience expect to see and what are you most excited about for the big night?

Well, you can absolutely expect to see my big personality and lots of fun! I do not hold back! I’m going to be beautiful, bringing the drip drip all the way down to the red carpet (laughs) and the goal is to have a good time and really highlight and celebrate those who are being honored. I’m so excited to be part of this event, I’ve been able to witness this event grow and it’s a blessing to share the stage with Headcrack! It’s going to be an amazing event!

I mentioned that I am a franchise owner. I own multiple franchises for CPR-Cell Phone Repair. My 1st one is at 50 Barrett PKWY Ste #3020 Marietta, Georgia and the 2nd location is opening July 2019 at 2200 Duluth Hwy Ste B102, Duluth Georgia 30097. You can come and get all mobile devices (iphones, ipads, apple watches, tablets, drones, android and laptops) fixed! My book “Bye Bye Bags, Laughing to Lighten the Load,” will be coming out this summer. I have a movie called, Sextuplets coming out on Netflix with Marlon Wayans, and I also have a few projects that I can’t discuss but be sure to follow me on social media to keep up with what I’m doing! 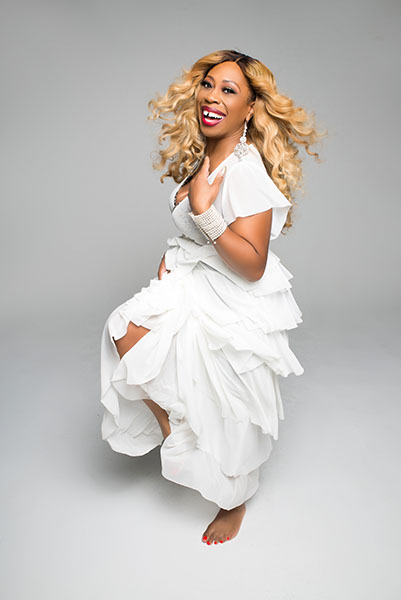 All images by Dwayne Boyd | provided by The Kiana Dancie