Over the years, actor Chris Warren has captivated the hearts of many all over the world. You saw him in Zoey 101, High School Musical 1, 2, and 3, and much more but now Warren is stepping out and letting his fans know that he’s capable of portraying any role given to him. This summer, Warren can be seen starring in ABC’s new drama series, Grand Hotel, which was directed and executive produced by Eva Longoria. In addition to that, he will be executive producing and co-starring in his own project, Nice Iranian Girl. We caught up with the actor to talk about his exciting new roles and what he has planned for the future.

Well, I’ve been acting since I was five-years-old. I’ve always loved being on set, portraying different characters; everything about acting kind of really spoke to me. When I was that young, honestly I really only did it so that I could get some Kraft services. I was all about snacks on set and that was a huge motivation for me as a kid (laughs). I figured out that if I got booked, I would get snacks so that was cool for me (laughs).

As I got older, I realized more what a blessing it has been to do what I do for a living. I’m so grateful for that.

Tell us about your role in ABC’s drama series, Grand Hotel.

Grand Hotel is a show executive produced by Eva Longoria. She has done an amazing job having an incredibly diverse, talented cast and crew. My character Jas on is loyal and friends with everyone at the hotel. They all trust him because he has been working there since he was a teenager. The audience will get to see the inner-workings of the hotel through Jason’s eyes. He works with his mom who is also the manager of the hotel (portrayed by Wendy Raquel Robinson). I grew up watching her on The Steve Harvey Show so it has been pretty cool working with her and our amazing cast!

How is this role different from any other role you have portrayed previously?

Most of my roles previously were teenagers. Its been refreshing to play an adult, honestly but the main difference is that previously all my roles have been supporting. This is really my first lead role and real opportunity for others to see what I can do. I’ve been grinding and hoping for a role like this for a while and I’m really grateful that it is all coming to fruition.

Do you mind telling us about Nice Iranian Girl and your role as executive producer?

Well, this is very exciting for me because it is something I have always wanted to do. I’ve always wanted to produce and develop projects. Nice Iranian Girl is a project I produced together with my wife. It’s about her experience as a refugee, growing up in a multi-cultural household, and struggling with identity. All of those things really spoke to me. It was on The Festival Circuit and it garnered some interest so we are actually in the process of developing it into a series as we speak!

I have a film coming out this summer called ‘Extracurricular Activities’ a dark comedy with comedian Bobby Lee who is hilarious and I plan on continuing to produce and develop projects that speak to me.

Be sure to check out Grand Hotel on ABC Monday, June 17th! 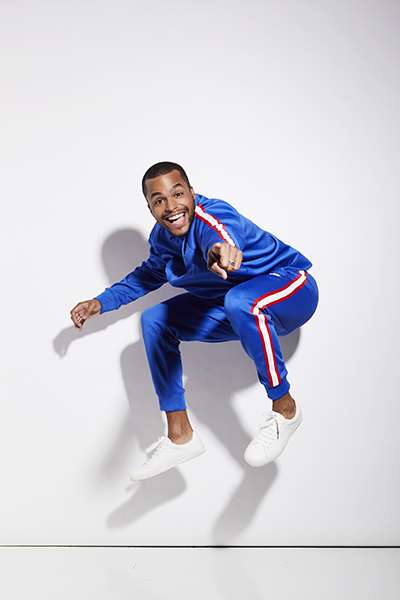 Stay connected with Chris Warren by following him on