Award-winning actor and film producer, Tobias Truvillion is a man known for his transformative role in the world of entertainment. The Queens native is adamant that the entertainment industry chose him and in a way, saved his life. In this exclusive interview, Tobias opened up to us to talk to us about his experience in the film, Against All Enemies, his new role in the upcoming film, Equal Standard, and his upcoming projects.

Tell us a little bit about yourself. What made you want to get into the entertainment industry?

The angels have been watching out for me.  A door opened up and I kicked it down. Growing up in Queens, New York with so many influences at arm’s length, I could have been on some other path but I’m grateful to have found the beginning of my passion in theater.  The arts saved my life. It’s the reason I’m a youth arts advocate today.

Can you tell us about your role in the film, Equal Standard?

I play a police officer trying to balance his loyalty and passion as a detective for NYPD. While balancing his role as a father, husband, and black man in America dealing with racial stereotypes, injustices, and inequalities. Personally and as a community. The film has a few storylines but it focuses on the death of a police officer shot and killed by off duty detective played by me after he was racially profiled as a black man in Queens, New York. If you loved the movie CRASH, you’ll enjoy this.

How was your overall experience in the film, Against All Enemies?

Working on Against All Enemies was so much fun. I got a chance to do some prosthetic makeup on my face. They created a really bad black eye that was mangled from the Vietnam War. I. I also got a chance to play a black panther because the film takes place in the ’60s.  I’m an old soul so it was fun dressing up in authentic 1960s clothes. We filmed in one of Frank Sintra’s old estates from back in the day. I can’t wait to see this film. From the look, the tone, everything. It’s very humbling and makes me proud at the same time.

Are there any upcoming projects you can give us insight into?

I have a bunch of projects coming out from equal standard. To love dot com a romantic comedy.  It’ll be out on demand in November. Too playing opposite of Jill Scott in the new first wives club series premiering on BET this September. Not to mention a Christmas movie I’m starring in called Holiday Heist. It will be out during the holiday season this year. Also, have a really great movie called the stuff it’s A dramedy hitting sometime this year. But don’t forget to get your popcorn and watch me in Loved to Death, July 21 on TV One. 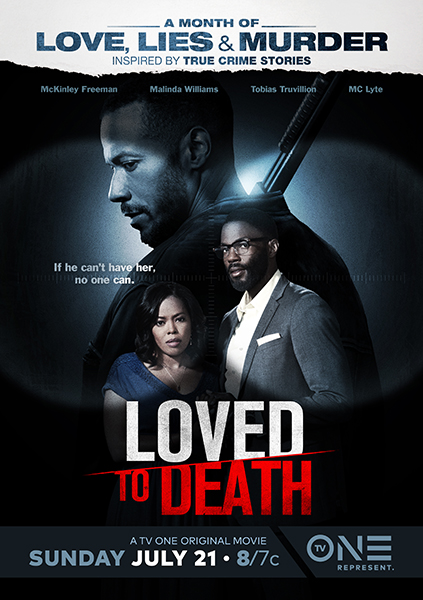 photo provided by tv one

I see myself continually doing what I’ve always been doing. Making TV and film while taking care of my family and providing opportunities for people in the community. Empowerment is key. Equality is vital. Spending time to travel and lots of love!