Actress and Philanthropist Nichole Galicia Discusses Her Start in The Industry, an Exciting NEW Role, & The Inspiration Behind Creating Her Non-Profit

Born in Panama and raised in New York, actress and philanthropist Nichole Galicia first stepped into the world of fashion before she got her start in entertainment. In an exclusive interview with Galicia, she opens up to us about her start, an exciting new role in Quentin Tarantino’s highly anticipated film, Once Upon A Time… In Hollywood, and what inspired her to create her nonprofit organization, The Orchid Foundation.

How did you get your start in the entertainment industry?

I started my career in fashion when I was 13.  My very first shoot I took a bus to NJ with my mom.  I was booked to do catalogue.  I was getting paid $180/day for 3 days and I thought I was rich and fancy.  I was so nervous that I fainted on set.  My mother had to stand behind the photographer so I could focus only on her as she mimed all the poses for me, it was our own secret game of Simon Says. Years later I entered and won a modeling contest. Someone  at my agency suggested I take acting classes.  I was crushed.  I thought that was code for you are a horrible model. I went crying to my booker who explained that I had (still do) such a large personality that I should try my hand at everything, conquer the world. I booked the very first acting audition I went on and the rest is history I had the acting bug.  Those tears were also the last remanent of thin skin I had.  This industry has given me a layer of impenetrable steel and vibranium.

Can you tell us about your role in the highly anticipated film, “Once Upon a Time…In Hollywood”?

I can not tell you anything because I legitimately signed an NDA. I can tell you that working with Tarantino for a second time is like a waking dream.  Tarantino is everything.  Working with him is what you imagine. He’s so in love with every detail on his set. His passion is infectious, it’s like being in the womb: familiar, safe, free to be anything you can dream of.  My first day on set, my first close up we went through 11 takes.  No words just “cut” and “action”, cut and action 11 times.  When it was time for take 12 I mustered up the nerve to look to Quentin who was inches from me to ask if he wanted me to do something differently. He replied, “No, I’m just enjoying how many different ways you are doing this scene.”  It’s the experience I have always wished for myself and for every actor.  It’s high art in its purest form.  Then add that he’s nice, laid back, FUN and super protective. I feel honored and blessed that he came back to me for a second opportunity.   I’m a Tarantino character two times over. The rest is just gravy.

Are there any other directors you dream of working with?

YES! I am obsessed with Pedro Almodovar.  Volver was about the women in my family.  Broken Embraces is how I love, with everything I have. No one writes women the way Almodovar and Tarantino write women.  Then you know there is Cameron, Scorsese, Ava DuVernay, Spielberg, Fincher, Taylor Sheridan, Kathyrn Bigelow you know The List!

Tell us about your nonprofit organization, The Orchid Foundation.

I started The Orchid Foundation (TOF) more than four years ago.  I wanted to give back to girls because I have been given so much. TOF is a 501(c)3 nonprofit with the mission of mentoring underserved girls.  I currently have eight girls that I call Orchids.  So many people have helped me.  First, I’m lucky to have an incredible mother, like I often wonder how the rest of you survive the world without her. She knows everything, she’s cool and down to earth, she knows how to hatch a plan and keep her mouth shut, she’s so fun but don’t cross her because her kindness is not to be mistaken for weakness.  But also actress Vanessa Bell Calloway has guided me through this business, Kent Alessandro made sure I was cultured, educated, bi-lingual and tough, Isiah Thomas saved my life and asked nothing in return.  I have had so many mentors that made sure that I was GOOD GOOD that I knew at some point I should pay it forward. At The Orchid Foundation, we have a ton of programs, some of which include a college boot camp, year-round tutoring, a financial literacy course, exposure to the arts, mock interviews to prep for internships and/or jobs, basically anything I can think of.  Actor Chris Pine is one of our Orchid Angels. He’s our Super Donor, he supports my girls every year.  So many people and companies have embraced us.   One of my girls is going to change the world given the right opportunity.  More than one actually. My girls are pint-sized powerhouses but we are going to show you rather than tell you.  Check back in ten years.

Well aside from raising the ultimate girl squad at The Orchid Foundation, I have no clue and I’m OK with that.  I’m living in my fabulous moment, living my best life. Life is too short for a to-do list. My only plans are to trust my gut, be quiet somewhere with my man and pop up on your movie screen in great projects. 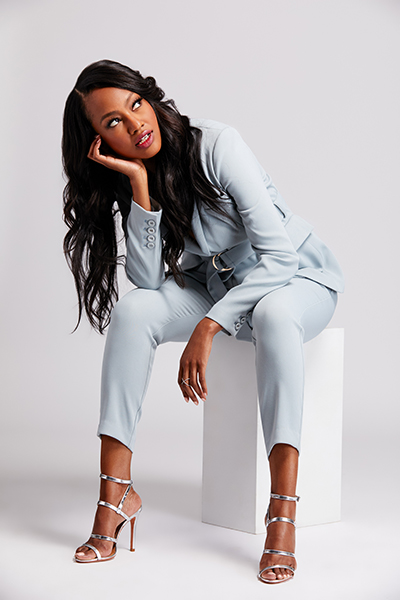 All images by Ryan West | provided by Status PR