It is undeniably a given that Carly Hughes steals the show every Friday night on ABC’s hit series, American Housewife as she portrays a bad ass lawyer named, Angela. After tuning into the show, naturally we hd to find out just who the actress was on screen and quite frankly, how she keeps her skin looking amazing while juggling her busy schedule! In this exclusive interview with Hughes, we caught up to discuss her experience on the hit show, her skincare must-haves, and why breast cancer is something so near and dear to her heart.

Tell us about your experience on ABC’s hit series, American Housewife.

It’s been great! It was an unbelievable surprise when I booked it. You go on so many auditions hoping you get it but you have to keep going. I was doing a Broadway show at the time so when I booked it, I was like “What?!” It spiraled up from there. I play an amazing character who is a great example of society today. She is a lawyer in Connecticut who happens to be a black woman, who happens to be a lesbian on the show. She has two kids and is going through a divorce so she hits all the angles while still being a real human being.

You, Ali Wong, and Katy Mixon are the definition of female power when it comes to female comedy. What was it like working with one another for this project?

Its been a blast from day one of the pilot! We laugh at each other all the time so that friendship easily carries over on screen because we don’t have to fake anything! There are even times when they’re like “Okay guys, stop laughing. You actually have to say the lines now” (laughs). We genuinely like each other and we find each other hilarious (laughs).

Outside of acting, you are very passionate about skincare. Why is skincare so important to you?

It started when I was very young. My mom always stressed putting lotion or moisturizer on (laughs). My mom is just turning 58-years-old and her skin is flawless! The older I got watching her, I began to understand. Its the first thing you see, your skin and your smile. If you can represent yourself in the best way possible (and I don’t mean being flawless), in your own skin and taking care of it, then you already have a foot forward, in my opinion.

SHEEN Magazine is the Ultimate Beauty Guide for the Modern Day Woman. Can you please share with us your holy grail products?

I get my facials done at Kate Somerville Skincare here in Los Angeles. I use a lot of her products. I use her Exfoliate Glow Moisturizer all the time and she also has a Deep Tissue Repair Moisturizer that I use at night. I love the Wrinkle Warrior Eye Cream and she has an Everyday ExfoliKate Cleanser and Scrub. The scrub I use twice a week. I also like to switch my skincare up. It’s like deodorant, you want to change your deodorant every three months because your skin will grow used to it. I love Mario Badescu’s Glyconic Toner and Foaming Cleanser. I do face masks nonstop as well! Everyday I go to set, I have to help myself out with some eye masks (laughs).

We also know that breast cancer is something near and dear to your heart. Ahead of Breast Cancer Awareness Month, can you shine light on your commitment to achieve prevention and a cure for the disease?

My mom was diagnosed with stage three breast cancer last year which was just awful and a surprise to all of us. It became a nonstop. Women are warriors because all you had to do was march ahead and conquer it. It became a huge thing for me. She finished her treatment in March so for myself and for everyone else, I think it is important to spread the word because without knowledge, there is no power. If you’re not armed with the tools, you don’t know how to combat or prevent it. There is a lot of stigma and fear that goes along with breast cancer and I think if you educate more about the options and different levels, it takes away a bit of that fear factor and encourages people to go and do the preventatives so that they don’t have to get the worst case scenarios.

What can we expect to see from Carly Hughes in the future?

Well, I would love to do an album, a standard jazz album. I want to work on in the next year. I do have some singles that I will be releasing later this year. There are some movies in the works too! 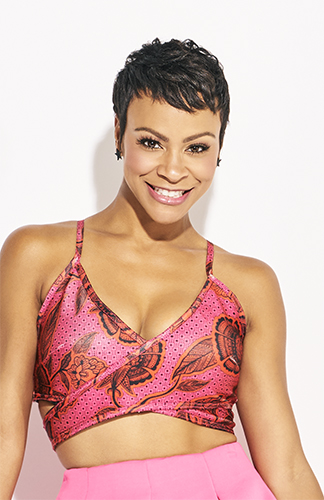