Actress, Cassandra Freeman Discusses the Many Roles Acting Has Allowed Her to Portray in Life

Have you ever thought of being an actor/actress in a way that they can literally be anything they want to be? Consider it a true form of art because, well it is! Actress, Cassandra Freeman is the perfect example of that. Freeman has considered different career paths in life but when it came down to picking just one role she would carry in life, she chose the one that would allow her to use her platform to play more than just role. Read on and let Cassandra be the one to elaborate more on this. In this exclusive interview with Cassandra Freeman, the actress discusses her role on NBC’s hit series, The Enemy Within and the many assets she has gained since becoming an actress.

Tell us about yourself. What inspired you to get into the world of entertainment?

I’m originally from Florida. I’ve been an actress since I was 15-years-old. I went to three different schools: an arts high school, college, and grad school at NYU for it. The thing that inspired me at the beginning to become an actress was that at one point, I wanted to become a pastor then I thought about becoming a politician, then I realized that acting might be a great combination of both those ideas because storytelling is a very powerful tool to teach. It is also a great tool to teach empathy with. I’ve been doing it for many years. It uses your mind so much. You can be a journalist, a scientist, or a psychologist. You can do so many things at once as an actor. It’s been really great for me.

When I first started, I did it because I thought it was important for people to know that there are people like me in the world. People with my color, people with my hair, people with my sense of ability. In 2019, I feel like we’re surrounded by such a diverse array of actors that I don’t even feel like that’s my calling anymore. Now its just telling really great, dynamic stories about amazing women.

Tell us about your new project, The Enemy Within.

The Enemy Within is a new show on NBC, it airs Monday nights at 10PM. The show is a spy thriller. I work with Morris Chestnut every week and we work for the FBI. We basically work for the James Bonds, the Jason Bournes, like the spies that are here in America. We hope to save the Americans that they try to ruin in the process. The show is mainly about Morris Chestnut’s character, Will Keaton and Jennifer Carpenter’s character, Erica Shepherd working together to find all these spies. Shepherd is responsible for killing Keaton’s fiancé and she’s also the biggest spy in American history. It’s the worst two people that could be working together to find all these bad people here in the states. 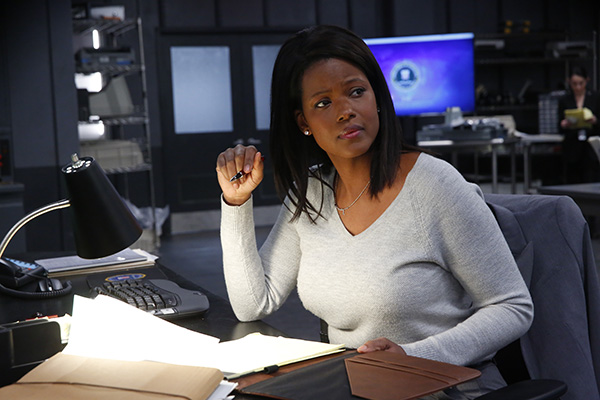 Do you believe you and your character are more similar or would you say you two do not compare at all?

We have one thing in common! We are both witty. I love cracking jokes and being funny and she’s like that. Otherwise, we are nothing alike. She is a great hostage negotiator. She’s very tactically trained with her mind and also with her body. She can take anyone down in like two steps (laughs). I have none of that. She is also quick on her hands with a gun, we both have a great sense of humor though, and that is where it stops (laughs).

What do you think being an actress has taught you about yourself?

Oh yes! Constantly. It is constantly evolving and that’s what is great about being an actor. You can ask me that every year and I will have a new answer. Right now, I would say recently, in the past two years the big revelation was that I didn’t think I wanted to be a mother. I did a role for Lifetime’s The Real MVP: The Wanda Durant Story and the movie changed my entire idea about what it meant to be a parent. I thought that wow; this was the best creative job ever! It changed my whole idea about parenthood so yes, every role changes me. Roles seek to change you.

In the years to come, I hope to become have the things I have written produced. I want to produce more content that comes from me!

Stay connected with Cassandra by following her on