Actress, Diona Reasonover Opens Up About Her Experience on NCIS, Her Role in the Indie Comedy, Film Fest, & Writing!

Actress, Diona Reasonover completely stole the show on CBS’ veteran crime drama, NCIS when she made her appearance as Kasie Hines on the 15th season of the show. Now in the series’ 17th season, we haven’t stopped loving her! Next, Diona can be seen starring on the big screen of an indie film titled, Film Fest. We caught up with Reasonover to discuss her experience thus far on NCIS, her passion for writing, and much more!

Tell us about yourself. What made you want to become an actress?

Well, I’m not exactly sure when it happened. I just knew I liked acting and no one every tried to talk me out of it. I was really lucky because there was a very good Arts program where I grew up. I decided that I wanted to train with them and I got the opportunity to! When I got to college, I studied it enjoyed it, and I haven’t stopped since. I wish it was some fancy story but it’s really not (laughs).

How has your experience been thus far on NCIS?

It’s been great. It has honestly been very incredible. Everyone is so nice and I did not think that I would be on such a big show! When you move to Los Angeles, you hope that you’ll be something but you never know you’re going to be on the number one drama in the country! We get millions of viewers, it’s insane! I recently checked the initial numbers and it was like ten million viewers! That’s huge, ten million people saw my face!

Tell us about your role in the indie comedy, Film Fest.

I play Alex Davis who is this indie producer. You find out throughout this film that she’s never actually produced anything (laughs). She’s really hoping that everything goes well and is pretty desperate for people to think that she is competent. It’s a great role and it’s a lot like Kacie in NCIS. They both care so much and they’re people pleasers in a way (laughs) in a good way. It’s different because Alex will fall apart much more so than Kacie would, she’s very emotional.

Matt Cook and C.J. Vana were actually cast for Film Fest. They worked with me in Clipped. They were telling Marshall about me. That was a little Clipped reunion, I love those guys, they’re great!

Writing is also one of your passions. What do you hope to accomplish in that area of your career?

I don’t know, I think I’m just going along for the ride. I have already accomplished more than I thought I would. I never thought that I would be a television writer. The fact that I have written four or five episodes of television, that’s incredible. I never thought that it would happen. I want to write a movie, does Hollywood need another movie? (Laughs).

Ooh, I’m so bad at future planning. I don’t know, I hope to surprise you (laughs)! 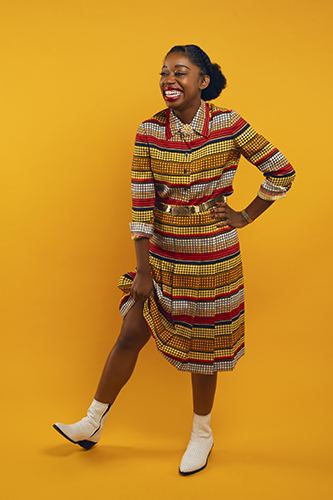