Time to pick up your poms poms, run to your television screens and tune in for another epic season of CW’s drama series, All American. After stealing our hearts in Season 1, with her resilience and strength in being a single mother to Spencer and Dylan we watched the impeccable Grace James do it all on her own, with zero complaints. Sheen Magazine had a chance to catch up with Actress Karimah Westbrook about her character as Grace James and the overwhelming response from fans. Here’s the teaser trailer for your exclusive first look of what you can expect in Season 2.

Did you except the feedback you received from season one?

You never know how viewers will respond to anything so I didn’t have any expectations. I only had high hopes that the show would be received well and I’m happy that it has been.

Tell us about the moments after.

It’s been both a blessing and exciting to read all the wonderful feedback regarding the show. Both kids and adults are loving All American. I receive messages on social media all of the time. It makes me give thanks to be a part of such a wonderful, thought-provoking series.

Grace is a woman full of strength and perseverance, however we watched in Season 1 a lot of her secrets unfold. How were you able to still maintain Grace’s softness and likableness she exudes; resulting in the audience to be disappointed but yet still forgiving of her character?

I’m not for sure how I did it, I think there’s duality to everyone. I think people can still like a character, be disappointed in the choices they make but also forgive them for those choices. That’s real life.

Now that Grace’s secret is revealed do you feeling like her intentions for Spencer to attend Beverly High is solely for a better education or to rekindle any old emotions with Coach Baker or perhaps a little bit of both?

Grace’s intentions are solely for Spencer to be exposed to more in life and to receive a better education.

Grace keeping secrets from Spencer & Dylan, do you think she was protecting her sons or more herself?

I think Grace keeping secrets was both to protect her sons and herself. 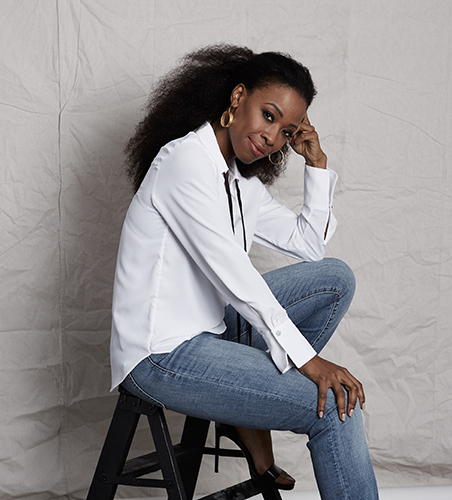 The similarities between both Grace and I is that we both love and work hard. We both make mistakes and will do whatever it takes to make things happen.

Does Grace find love in Season 2?

You have to tune in to find out.

What more can All American fans expect from this season?

I can’t give any spoilers but what I can say is that I think the writers have created something really special with season two. The characters and story lines are so good, real and deep. We will all need tissues and perhaps a bit of therapy afterwards.

All American returns Monday, October 7 on The CW.