Actress and producer of Loud Film Productions, Shaquita Smith is a woman that exemplifies strength, courage, and hard work. We witnessed her as a badass on NCIS: New Orleans but now, we are preparing to see her in a new light as she shifts gears and stars in a romantic comedy called, Switched at Love. In her success, Smith describes that in order to get to where she is today, she had to face tribulations that allowed her face life head on. We caught up with the actress as she opened up to us about her childhood, her desire to get into the world of entertainment, and her exciting new role.

What made you want to get into the world of entertainment as an actress and producer?

In eighth grade, I passed this theater class and it looked interesting to me. I ended up taking one class and decided that it was something I truly loved not from the perspective of wanting to be on stage but I could be someone else and I could make someone else happy. I think the biggest thing about the acting world is that I can actually bless other people with my performance. I think that continually drives me each day, morning, and moment.

I also had a lot of motivation when I was a child. It encouraged me to continue to do what I do today. 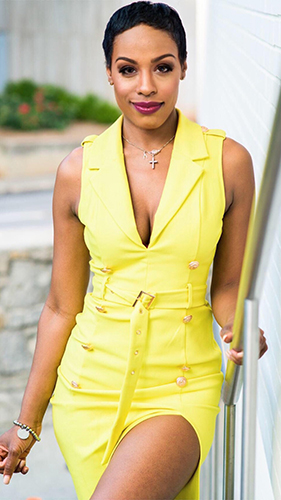 Can you tell us about your exciting new film project? What can viewers expect to see?

I am in a film called, Switched at Love. I’m starring alongside Mike Merrill, who was in The Bobby Brown Story and doing phenomenal things. We also have Chrystale Wilson from The Players Club. We really have some great, talented actors in this project. It is a romantic comedy with a great story and message. The characters in this film find out what they truly want and love. It’s my first comedy. Normally, everyone is used to seeing me in action-thrillers.

I’m actually on a television series called, Bag Men which is great. I went from being a cop to something that is so completely different but I am excited for people to see a different perspective of me.

Your childhood had an influential role in your success today. What can you tell us about it and how it led you to become an actress?

Well, I am a twin and when I was younger, I was in the Children System. From a young age, I was molested by my uncle. I used acting as a therapeutic session for me. My childhood wasn’t really a childhood because of everything I had to deal with. When I found acting, it was a safe haven for me. I was adopted by my grandmother, who just passed a few months ago. She raised me and my twin brother since I was 17-years-old. I went to college on a full scholarship, which was a blessing. Between the time that she raised me, she taught me to be strong and to believe in myself in all that I wanted to do. She encouraged me to do what I wanted to do, which was acting. She gave me advice, she took me to each theater class, and she fully supported me. As a child, you always want someone to love, support, and believe in what you do. She also put me in church. The face of God and driving my acting ability really helped me along the way.

People always say, “I’m sorry for what you had to go through” but it really blessed me and encouraged me. If it didn’t happen, I wouldn’t be who I am today. One of the reasons why I was taken from my mother was because she was on drugs. Now, I always tell her, “Thank you.” Even though it was a bad situation, it helped me today.

Can you offer your best advice to our readers?

What I have learned throughout the years is that when traumatic things happen to you, you feel like you’re abnormal. You think that you are not a good fit. The truth of the matter is that the traumatic things is basically saying that you are chosen, you have a gift, you have something that is worth-while to tell. If you truly believe that, you will go far.

Also, I think that whatever goals you have, continue to believe in yourself and your goals, never take no for an answer. A lot of times, we get a “No.” You have to push through what people say and listen to what you say in your heart and your soul. If it’s meant to be, it shall be.

What can we expect to see from Shaquita Smith in the future?

I will be shooting Bag Men next week. Switched at Love will be released soon, and I will be filming a drama project in Canada. I’m producing a pilot called Greed, which is going to be phenomenal! Those are a few things to look out for, just ride on this journey with me! 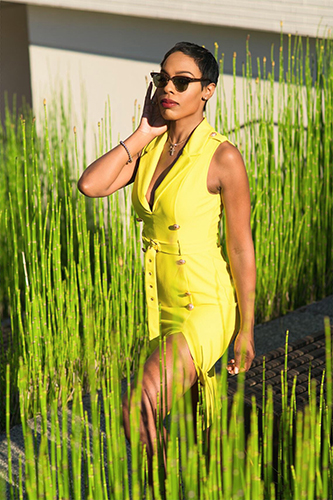