Devyn Nicole: Adding a Splash of Female Color to the Comic Book World

Superhero/heroine creator and motivational speaker, Devyn Nicole is currently making her mark in the comic book world. Driven by a desire to fulfill the need for more Inclusion in comic book pages, Devyn sought out to create Zara, a newly developed female superhero under Heroic Icon Entertainment. By creating Zara, Devyn hopes to empower and inspire young people of color to unleash their own superpowers, by unlocking their full potential and overcoming their obstacles.

What inspired you to create Zara (female comic book superheroine)?

It came to me about 6 years ago, I was never really that interested in comic books. One day the thought came into my head, “Come up with a character of color.” It kept popping up in my head. I was like, “Character of color, character of color.” And then I thought, “No, I’m not into superheroes. This is not for me, you have the wrong person.” The thought would not go away, so I literally just sat down; and told myself, “Okay, I’m going to do this.” So, probably around ten pages into the script, I fell in love and now I’m here sharing her story with the world.

You are currently on your “How To Be a Hero Tour,” – where you teach students about the importance of self-affirmation. How did you get into motivational speaking?

How did I get into it? I would say I’ve always encouraged myself. I will say that literally, my life has played out just by my way of prophetic thinking. I’ve always spoke things into existence… “Like, okay. If I can just think this way, what will my outcome be?” I’ve always read different types of books when I was younger. So I was like, “You know what? I’m going to try, I’m going to do it, I’m going to just jump, I’m going to go for it”. And since then, my life has played out, almost literally, if not more than I expected. So now, it’s great to teach young kids how they can create their own reality. I love to have the ability to go into these schools and say, “Hey as long as you believe in what you want to become, whatever it is, you can do it!” 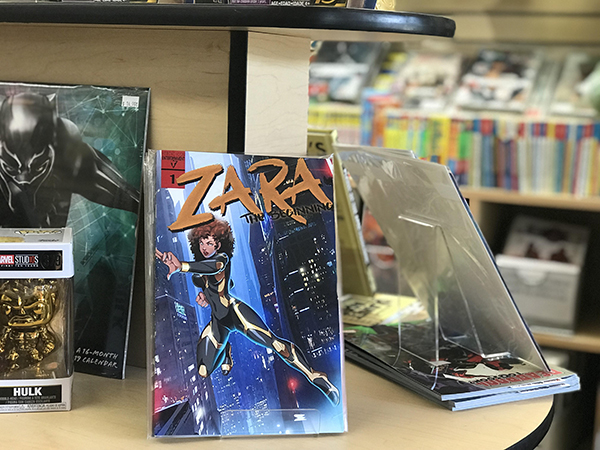 How important is developing self-esteem to ensure success in life?

It’s extremely important. I feel like you have to have confidence, that’s the key to even become slightly successful. I feel…. I actually want to bring this story up… I read a recent article about a young boy who committed suicide. The last thing he said to his mom is, “the only thing I really want to be when I grow up is a hero”. But when he was in school, he was constantly being bullied. He didn’t feel worthy, he didn’t feel like he would ever accomplish his dream. You know, that’s why it is really important to just instill certain ideas into these children. Like, “You are great, you are worthy, you are worth it. You know, you can be successful despite your situation or whatever everyone else is telling you.” You have to have the confidence to be able to bring whatever it is into your realm because things don’t happen exactly how you plan it out, but it will happen for its own good.

What advice would you give young African American girls who want to be superheroes or comic book writers?

I would say, “Go for it and don’t limit yourself.” For me, when I first started writing, I would say, “I don’t want to offend anyone and I don’t want to put this in there because I’m scared of how someone else may take it.” And my friends would literally say, “Just do it, you have to just do it, you have to just go for it.” Because I feel like God gave me these ideas for a purpose. So I would say, “Just go for it!” There’s not to many females leads of color in the comic industry, but we are paving the way for people to come in, just how a lot of them paved the way for us today.

What projects can we expect from you in the future?

We’re working on projects for both TV and film. Of course, I will continue to do school tours, and speak to students throughout my life.But my goal is to start a nonprofit so these students can have a program not just for one day out of the year, but so they can constantly be reminded that they are superheroes. I look at this as a new franchise, like [Marvel] or D.C. Not as competition of course. I just want to bring very diverse roles or just characters in general into the mainstream media.

Stay connected with the Devyn by following her on social media: @Devynnicole_ & @Zaraheroic

All images provided by Devyn Nicole