Amina Smith Talks New Show, ‘Emerge’ & Her Journey to Get to Where She is Today!

Reporter/host, Amina Smith has made quite the name for herself in the world of entertainment and sports journalism. Smith, whose hard work and dedication earned her, her very own show on Watch Stadium networks in collaboration with Michael Felder titled, Emerge is here to let you know she’s just getting started. The bubbly, passionate on-air personality sat down with Sheen Magazine to give us insight into her new show and her journey to success!

Tell us about yourself. What made you want to get into the journalism world?

Right now, I’m a host and reporter for Watch Stadium sports network based in Chicago where I host a show called, “Emerge,” as well as a correspondent for BET Networks working on various series such as BET Breaks, Set Trippin’, and red carpet projects.

I would say my introduction into journalism came at a young age. Radio was actually my first love. I must’ve been around seven or eight when I started recording “radio shows” over my great grandma’s cassette tapes back home in Brooklyn. She would kill me for going over her good ones with her music on it! Patti LaBelle or whatever it was. Recording was what I did for fun since we didn’t have much growing up.

In high school I began to explore journalism a bit more, but on the TV side. I co-hosted a weekly show in high school that everyone had a chance to see, and to my surprise, I found out through my guidance counselor that I could actually major in it, so I ran with it! Throughout college I majored in communications and journalism, and was very active with on-campus media at the University of South Carolina and later at the University of Miami where I finished my degree. I created my own radio show at USC, then went on to anchor and report at UMiami, took countless unpaid internships all over the country, and that’s what really helped me get my foot in the door post-grad.

What do you remember most about your internship experiences?

My wildest experience came when I took my first out-of-state internship in sunny Los Angeles. I was interning for the Dan Patrick Show at the time, and moved to LA where I literally lived in woman’s room for three months. At age 19, I found her listing on AirBnB (before it was super popular) and used my summer scholarship to room there for my internship. With no means of transportation I had to then figure out a way to get to my internship, and lucky for me my roommate was nice enough to let me use her bike. So everyday I would bike about 3-4 miles to my internship. I was happy it didn’t rain much in LA! The whole thing sounds crazy in hindsight. Moving across the country with no living arrangements to then living with someone I didn’t know, but I was so determined to get experience and the opportunity to learn that I was willing to do whatever it took.

Do you mind sharing your experience so far with your new show called, Emerge with Michael Felder?

I love our show! My co-host, Michael Felder, and I call it the show with the most swag on the network. I came on board with Emerge in August 2018, and it’s a show where we spotlight top talent in high school football and basketball. It’s really where people get a look at who will be the next big stars on the field or on the court in college, and eventually beyond. It’s exciting because I feel like it is a market that people haven’t really tapped into, and there are a lot of college fans who are interested in who the next stars will be for their favorite teams.

You have interviewed many celebrities, but is there one that has left a special mark on you?

Working on the entertainment side has allowed me to interview plenty of A-listers, however, I would say there are two that really stick out from recent memory. Ciara and La La Anthony. What I loved about interviewing these two women was that they have this super genuine energy that you don’t get very often in the entertainment industry. Everything these two women gave me both on camera and behind the scenes was very genuine and raw. I remember La La Anthony even encouraging me before and after our interview! And Ciara on the red carpet of Black Girls Rock! telling me how amazing my look was that night and how she loved my glow, to how faith has helped build her marriage. Definitely moments and people I will never forget!

Where do you hope to see yourself in the years to come in life and in your career?

I see myself building my own production empire. I feel like right now I am kind of tapping into that with my website where I’m able to share my experiences with young women and men who are coming up in the entertainment industry that are looking for guidance or someone to give them a roadmap. I want to create a space where young people can put their creative talent to work, and tell stories from unique perspectives. At this moment, I point to LeBron James and what his production company, Spring Hill Entertainment, has created. It’s genius in my opinion! A space where athletes can be raw and real with their own. It’s gold! I want to be able to build something where people can be raw and entertaining all at the same time.

You can catch Amina hosting Emerge live Monday through Friday at 2PM EST on Watch Stadium! Head to WatchStadium.com/live to catch the show or check your local listings. 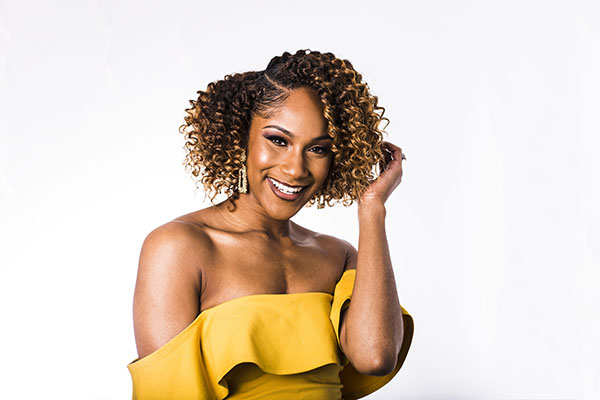 Stay connected with Malynda by following her on