In 2009, April Love was diagnosed with breast cancer but if you thought that would slow down the agency CEO/founder, than you were truly mistaken. Love promised herself to live a fulfilling life of purpose and holistic well-being and in that, she created the Pink Awards – which spreads love, celebrates those affected by breast cancer, and honors leaders in the big city of Atlanta, Georgia. We caught up with April to discuss the upcoming annual event to discuss all the details!

My name is April Love. I have had a career in entertainment and I have been a publicist for a number a years. I was also an event producer and worked with artists and talent. I am a breast cancer survivor and an advocate for holistic health and mind, body, and spirit wellness. I live in Atlanta but I travel quite a bit!

What inspired the creation of The Pink Awards?

I was diagnosed on Christmas Eve of 2009. After four months of being in a fog and not being able to process the diagnosis, with my birthday coming up in April, I had an event called Pink. I really wanted to just celebrate because I felt like I was not going to succumb to this diagnosis. I was really grateful my doctor sent me in for the mammogram because I was at stage 3 of cancer. In my own battle with breast cancer, there are so many people dealing with it. Its invasive and attention needs to be brought to it, not just in October. I realized also that with my support group and all that I was doing, I wasn’t getting anything from other organizations. Although they’re all created to improve research, they aren’t supporting families or pick up the pieces. I introduced The Pink Awards four years ago. With that, we adopted women that were currently in treatment and really in need. I also wanted it to be in duality of my entertainment career and bring it into the spotlight. I recognized people in the community that were doing amazing things, it’s the kind of things we all need to be exposed to. I married the two and The Pink Awards became The Pink Awards (laughs). The platform is all about awareness, celebrating life, supporting survivorship but also honor excellence of those that are in the fight and inspire people daily in our communities. 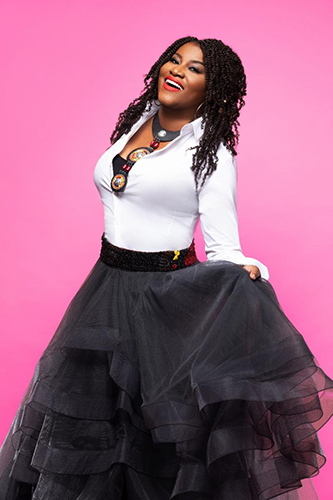 This will be the fourth year The Pink Awards is taking place. What can attendees expect to see?

It’s exponentially growing. Like I said, the first years were more of my friends and family, an intimate celebration. It took a life of its own now. This year, we expect double the amount of people that were there last year. We have bands, amazing honorees! It’s a lot of really amazing people that we are honoring this year. There will be great performances as well. This stage will be one of the stages Nivea will return to so we’re really excited. The survivors are the VIPs. This is all about those that have conquered something! You are going to have a night of amazing testimonies, great performances, it’s going to be entertaining. Survivors are our special guests. Show up with pink and celebrate life with us!

What are you looking forward to at the big event?

I’m just looking forward to putting all these amazing people in the same room and being on one accord to push this mission. I am so adamant about others becoming more aware and being mouth pieces for this cause. Early detection is key, a lot of people just really don’t go to the doctor until they’re symptomatic. You need to be aware, listen to your body, wake others because it’s going to touch you and you can be apart of prevention.

Where do you hope to see the event in the years to come?

I want this to go to television. I want to find a network partner because I made a career out of getting access for my clients. I think this, we need more of this content. We need more things of substance. I want to get this event funded and into the right hands to align ourselves with companies that are doing great things.

What can we expect to see from April Love in the future?

Everything! Getting the diagnosis and being blessed to see God get me through it… there’s no stopping me. I plan to create all levels of content. My podcast relaunched and I simply want to create a lot of platforms to put the right people in the spotlight. 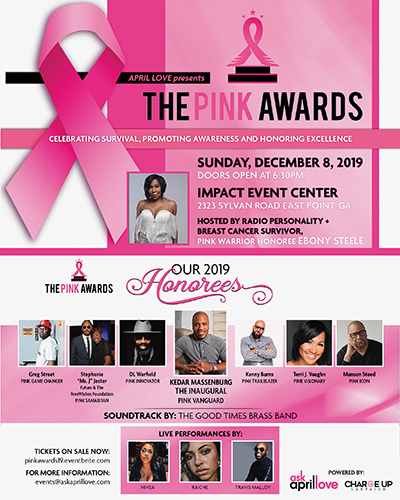 Purchase your tickets to the Pink Awards today by clicking here!

All images by Drea Nicole Photography