Atlanta native and rapper “Future” is using his platform to bless others around the world throughout the year but especially during the holiday season! Future and his FreeWishes Foundation gave away thousands of dollars in scholarships to deserving college students at every stop throughout his “Legendary Nights Tour” this year, he’s also known for giving back yearly to senior citizens and even hosts a senior fitness day for the elderly. We aren’t surprised the rapper is back this Christmas playing Santa Clause in the neighborhood he was raised in. 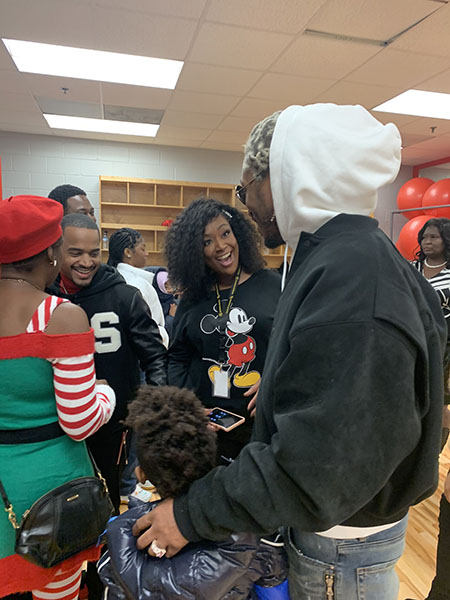 Future and his Freewishes Foundation are heavily impacting his hometown Atlanta, Kirkwood Community by giving back yearly during the holiday season. Last Sunday, Freewishes Foundation hosted their 6th Annual “Freewishes Winter Wishland” event that supplied hundreds of local families in the community with Christmas presents that included; bicycles, scooters, hoodies, electronics and more! Freewishes Foundation didn’t stop there though; They transformed the Bessie Branham Park into a magical, winter wonderland filled with so many amazing attractions. There was a Santa and Mrs. Clause, North pole attraction, food trucks, cotton candy, toy giveaways, live performances, and Future and his family were all in attendance! Super producer, Zaytoven and Freebandz New R&B Artist, Supernovaaaa were both in attendance supporting this amazing cause. SHEEN spoke with Rapper Future, his grandmother (Emma Jean Boyd), and his mother (Stephanie Jester) about the annual event and the rappers upbringing in the Kirkwood community and his passion for giving back! Check out the video exclusive below: