Author and beauty brand ambassador, Chermean is a woman who means business! The North Carolina native penned a drama series in which people just can’t get enough of. Her first novel, Perfectly Addicted,” was so successful, it followed with another titled, “Entangled Affairs.” Ahead of the release of her next novel, we caught up with the author to discuss the inspiration behind each book and what we can expect to see from her in the future!

Tell us about yourself. What made you want to become an author?

My name is Chermean and I title myself as The Sensuous Author. I actually became an author just based on the fact that I loved reading. I started reading when I was in my 30s and learned a lot about myself and astrology kind of struck me. I am a Gemini so I found it interesting that I am forever needing change (laughs). I found that writing was the best field for someone like me. I gave it a shot and I truly found the love for writing.

What inspired the creation of your first novel, “Perfectly Addicted”?

Well, I am a people watcher (laughs). I started seeing that a lot of my friends were going through crazy situations so off that, I made characters and a topic based on the crazy situations that I found in friends.

How did the idea for “Entangled Affairs” come about?

A lot of times in relationships, people keep secrets whether they are small or big. If some of those secrets were brought to the surface, it could really ruin a lot of relationships, families, and lives in general. Entangled Affairs is based off a scenario where this secret could ruin everyone!

Tell us about your new book, “The Sensuous Cookbook.” Do you mind the idea behind it?

Cooking is my favorite past time! When I’m not writing, I’m always posting on my social media the stuff that I cooked. A lot of people suggested that I write a cookbook and I was hesitant at first because I write sensuous novels. I found a cookbook method that would work well for me. It is similar to a novel while taking you through the stages of dating. I chapter-named every recipe. The first chapter is called Date Night. It has a signature drink to pair with the recipe along with a sensuous poem. It has sixteen recipes, sixteen poems, and sixteen drinks.

What can we expect to see from Chermean in the future?

I’m actually kind of going into this cooking thing more! I will still do my writing and some modeling but cooking is taking me on a whole new level that I did not anticipate. I’m not quite sure but it’s taking on a world of its own. You will see a lot more catering events, cooking, and I have a new book that will be coming out at the end of this year, which is a sequel to Perfectly Addicted. 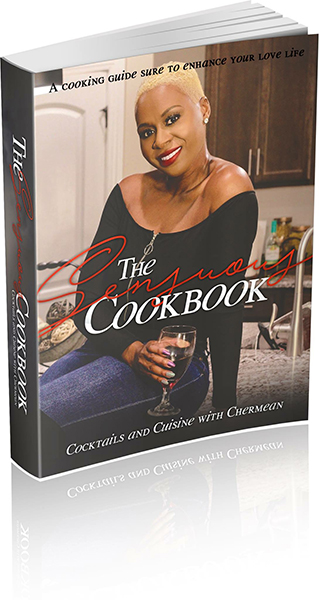 Stay connected with her by following her on Instagram!