Radio personality, Autumn Joi Live is the midday personality of Radio One Raleigh K97.5 and her show, The ‘Autumn Joi Live Show’ is the #1 top rated show! Joi explains that she was “bit by the entertainment bug” when she was just a young girl. From interning at radio stations to taking over the mic, she has had quite the journey to success. We caught up with Autumn to discuss her career, upcoming projects, and her transition to the worlds of television and acting.

How would you describe your overall journey to success in the radio world?

At the moment, I would just say completely blessed. I started out interning for Donnie Simpson, who is an OG in the radio/television world. When I got that internship, it completely changed the trajectory of my life. I say that because initially I didn’t know which direction I wanted to go in. I didn’t know if I wanted to be on the promotions side or if I wanted to be on-air until Donnie asked me to be his American Idol “chatterer.” The morning after American Idol, he asked me to come on and chat with him about it. At first, I wasn’t sure what was going to happen but once I heard myself in HD, I was completely hooked after that. I knew that behind the mic was exactly where I wanted to be. I was always getting trouble in school for talking to my friends and now I’m getting paid to talk to my friends (laughs).

You have the #1 midday show in North Carolina. What does this mean to you?

To be honest with you, it still shocks me at moments. I picked up everything, myself and my son (who was five at the time) and moved to Raleigh, North Carolina. I did not know what to expect. I can say that when I got down here, the midday show (I want to say) was ranked #12 in the market. I could say within the first three to four months, I was able to turn that #12 to a #4 and it’s been #1 now consistently for the last two and a half years that I’ve been there. Middays on radio is typically known as the filler spot. Of course, you have the morning show where everyone is tuned in on the way to work in their car. When they get back in their car to go home, it’s rush hour. Middays historically has been looked at as the shift to fill in the airwaves. I’ve literally made middays at K97.5 an appointment radio to where people actually tune in to specifically hear what I’m going to be talking about. I created the Hollywood Crunch entertainment segment and WOW Wednesdays where I highlight an amazing woman doing amazing things. I feature female DJs on Fridays for our “Femme Fatale Friday” segment. I just keep it topical, conversational, and I always remember that I’m talking to my friends. I have that home girl, girlfriend vibe. People love my tone so I think I’ve been able to successfully turn a filler spot into must-hear radio.

You are transitioning into the television and acting world now. What do you hope to accomplish in this space?

I’ve always heard that I don’t have a face for radio. I did corresponding for TMZ for a few years and I did red carpet events for BET. I’ve always been comfortable with being in front of the camera. Now, I have created an original series called The Fireside Chat, where I discuss very candid topics with a panel of people. We talk about relationships, sex, marriage, things that are kind of taboo. I’ve done some acting in the past, I did a commercial for Home Depot, I’ve been an extra in a few movies, and I did a few web series. My hope is to now transition into doing more television projects. I was asked to speak on a panel for a brand new network called CleoTV. I’m definitely looking forward to doing more acting, more television, and hosting red carpets.

What can we expect to see from Autumn Joi’s in the future?

You can definetly expect to see more of me! I’m excited to expand the Autumn Joi Live brand. I’m getting ready to kick off my 2nd Annual Speed Painting Soirée, it’s where speed dating meets sip and paint! It’s open to all and will be an interactive night filled with great food, good music & artwork created by each person! We’re bringing it back November 22nd. I’m also in the process of continuing my Fireside Chat. There are a couple of projects I can’t mention at the moment but just be on the lookout! 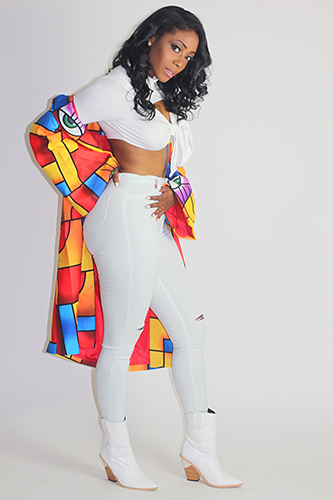 Hair by Veena B. of Veena B Hair Salon, Durham, NC