Emmy award-winning hairstylist is considered a vet in the world of hair. With over 13 years of experience in the beauty and entertainment industry, it doesn’t seem like there is anything she can’t do! Well now, Styles is taking her love for hair and her passion for education with the release of her latest project, a children’s illustrated book titled HAIR to educate both women and children on the importance of loving their hair. We caught up with Angela to discuss all the details.

How did you get your start in the beauty and entertainment industry?

I have been doing hair since I was 19-years-old. I’m from Chicago and I started working there. My first ad campaign was for a company that sells hair glue and remover (laughs). That was my introduction to doing freelance working. Maybe a year later, I moved to Los Angeles but I really wanted to work somewhere that was black-owned and I found Kim Kimbell’s salon and I got hired there the first week I moved there! I jumped into working in the celebrity realm because Kim Kimbell worked with people like Beyonce, Mary J. Blige, and more so there were many A-listers coming to get their hair done regularly. That became my world. I got an agent shortly after and opened a salon and I have just been going ever since!

Tell us about your first children’s illustrated book in the Pretty Curls Club series titled, Hair.

Hair is my first self-published book. It was really a passion project for me because I always loved hair but more than that, I would see the reaction I would get from clients when they would see natural hair. IT was also so many negative comments about it. I hated that so many adult women hated their natural hair texture. That was before we celebrated natural hair as much as we are now. Hair was in the making two and a half years before its release in 2018. I just wanted to create something for the next generation who needed some reassurance about their hair texture. I wanted to be the opposite of that and teach from a professional perspective but also in a kid-format where children could understand. Now moving forward, I’m working on a book for boys that has a similar language and other books that deal with diversity, friendship, us being individuals while still celebrating what we have. I’m working on an animated series as well. Hair is the baby and the start project to a lot of beautiful literatures to come. 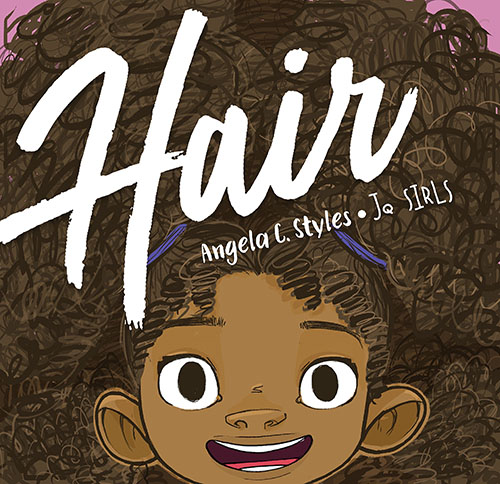 Why do you believe women and children should know the importance of loving their hair?

Hair is one of those things that we live with forever. The sooner you learn to love it and learn how to take care of it, the easier it will be for you to feel good about yourself and to walk out in the world and kill it. A lot of times, self-confidence derives from our hair. It’s something we can make changes in. In return, it creates more confidence for others to go out in the world and be their best selves.

With over 13 years in the world of beauty and entertainment, what advice would you give to others?

My best advice is to be open to all the experiences there may be for you. Don’t go into anything thinking that you know how it will go because this industry is so unexpected. It’s better to just go in with an open-mind with no expectation.

Well, so many things! I also have a hair extensions line. I do promote hair care in all forms and facets but for children, the most important thing is to learn self-love and hair care. As adults, we can’t take as much time to do our hair so thats where hair extensions come into play. They’re made to help you feel more confident and take on life. I promote my line Conscious Curls, I have a partnership with Step Up, a young women’s organization. We donate portion of our sales to Step Up to help young women in underprivileged  communities. I won an Emmy last year so I’m hoping we are nominated again this year! I’m going to put it out there and hopefully it comes out in fruition. I’m most looking forward to continuing to do what I love.