This year’s Soul Train Music Awards was live for the first time in Las Vegas and delivered the best of Black entertainment at the Orleans Arena this weekend.

Tisha Campbell and Tichina Arnold, hilarious and always on point from head to toe, were the perfect hosts.  Dancers, singers and comedic geniuses, with perfect timing on their exaggerated expressions, Tisha and Tichina set the stage for what was to happen the rest of the evening.  They kept the audience engaged from the blue carpet through the finale and confirmed to the world they are multitalented artists. Let’s call out to Issa Rae, Will Packer and Tyler Perry to give these talented women their own variety show.  Tichina Arnold let the world know that she was single and ready to mingle with her overt attempts to flirt with Mr. Walls, at one point asking Kirk Franklin his thoughts on premarital sex with reference to the BET’s “American Soul” actor.

New faces won the awards for Best R&B/Soul Female Artist, won by H.E.R., and Summer Walker won for Best New Artist.  A great win for the talented Ms. Walker, who was presented the award by the cast of Tyler Perry’s show “The Oval”, and a definitive positive for her career following the negative social media buzz after her meet and greet, where fans were given specific directions when meeting her.  Ms. Walker later released a statement via social media explaining her social anxiety. H.E.R. as always gave an inspiring acceptance speech after being presented the award by Keyshia Cole and Tank. Keyshia touched on Tank’s controversial comments on sexuality by asking if he wanted to ‘clear the air’.  He informed everyone that he stands by his comments.

The very handsome, Sinqua Walls, presented Kirk Franklin with his award for Best Gospel/Inspirational Award.  Mr. Franklin gave an inspirational speech stating that not everyone’s career is ‘microwaveable’, where success comes quickly while others may have to ‘marinate’ a few years before opportunity knocks on your door.  After receiving the award, Kirk Franklin presented Yolanda Adams with the Lady of Soul Award. Ms. Adams thanked everyone that had influence in her life professionally but created a touching moment when she thanked her daughter, Taylor Crawford.  She went on to get everyone ‘saved’ in the theater after the stirring performance of her best songs. Ms. Adams was so moved in the moment that she continued singing and praising as she walked off the stage from her performance.

There were Soul Train performances by SIR, K. Michelle, who gave a dreamy display in all white, TEAMARRR(sipped tea during her performance and was presented by her new boss and record label owner, Issa Rae), Tiana Major featuring Earthgang with an intro by Doctor Dot, Wale featuring Jeremih and was joined by Kelly Price(who looked amazing in all leather). Queen Naija performed her top hit “Good morning text”, Pink Sweat$, Luke James, who gave off Prince vibes on the blue carpet and onstage, perfomed with BJ the Chicago Kid and Ro James.  Baduism infected the 2019 Soul Cypher performance this year. Erykah Badu was the beat stirrer while Keyshia Cole, Tony Hamilton, Carl Thomas and Le’Andria Johnson blessed us with their revered voices. Ms. Johnson’s Christian version of Ms. Badu’s “Tyrone” was memorable with her suggesting “I think you better call Jesus. Call Him.”

It was a Jimmy Jam and Terry Lewis revival all night and the audience was there for it.  T&T started with a Janet Jackson medley of “Throb”, “Miss You Much”, “Black Cat” and “Rhythm Nation”, Boyz II Men performed “Tender Love” and “On Bended Knee,” Stokely brought the house down with his amazing performances of “She”, “Breaking My Heart” and the piece de resistance, “Pretty Brown Eyes”.  Babyface started the tribute and joined the legendary due for the final performances. Sounds of Blackness with Ann Nesby, Mary Davis and Aboul Ra’Oof of the S.O.S. Band, Alexander O’Neal with Cherrelle(whose voice is still incomparable) and the group jam of the evening, Morris Day with Jerome Benton all gave magical performances to thank Jimmy Jam and Terry Lewis for their contributions to R&B, dance and soul. 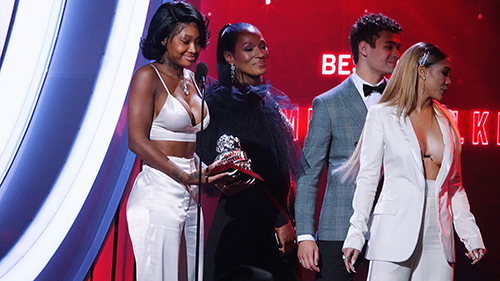 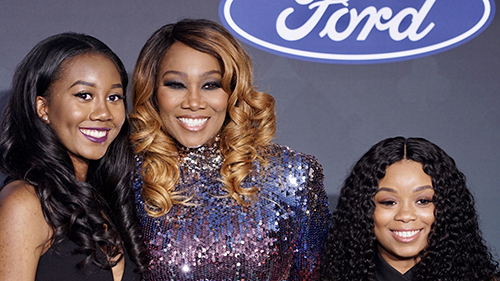 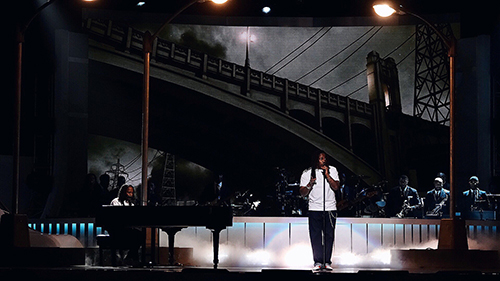 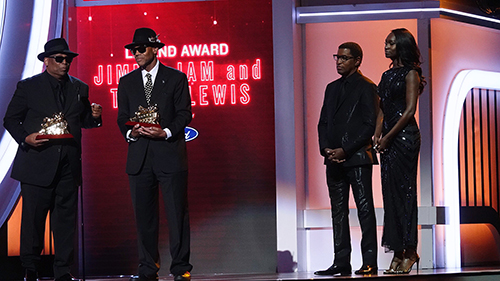 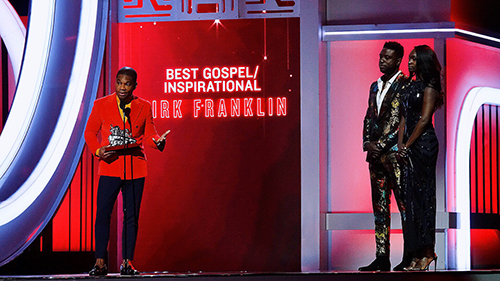 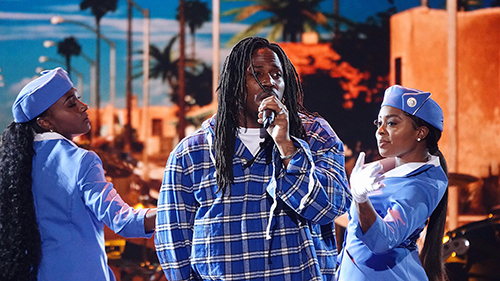 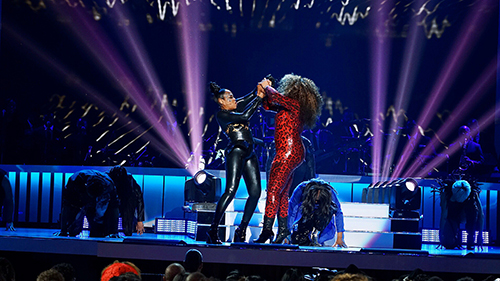 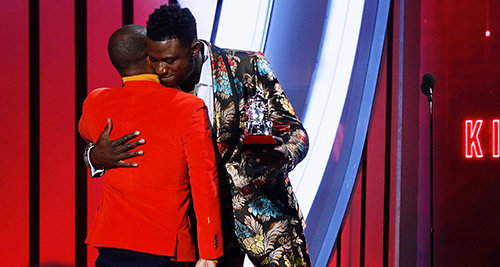 The following was supplied by BET Networks:

Jesse Collins Entertainment (JCE) is a full service television and film production company founded by entertainment industry veteran and Emmy® Award nominee Jesse Collins. For more than a decade, the company has played an integral role in producing some of television’s most memorable moments in music entertainment including groundbreaking and award winning television programming including the BET Awards, Soul Train Awards, BET Honors, UNCF An Evening of Stars, ABFF Awards and the BET Hip Hop Awards.  On the scripted side, JCE has produced numerous shows for BET including Real Husbands of Hollywood starring Kevin Hart as well as the critically acclaimed The New Edition Story, a biopic on the boy band that aired as a 3-part mini-series. It posted record ratings for the network and attracted nearly 30 million viewers. It was followed by The Bobby Brown Story, which chronicled the talented but troubled singer’s exit from the popular ’80s boy band through his solo success, and was the highest rated non-tentpole program on the network since The New Edition Story.  The company’s second season of American Soul, the critically-acclaimed period drama based on the untold rise of the iconic music and dance program Soul Train, will debut in 2020. For VH1, JCE has produced the network’s annual Mother’s Day special, Dear Mama and the hit game show Hip Hop Squares and for HBO, the hit comedy special, Amanda Seales I Be Knowin’. JCE also produced Rhythm and Flow where judges Cardi B, Chance the Rapper and T.I. searched for the next breakout hip-hop star in this music competition series for Netflix and Nashville Squares for CMT. Collins is also a producer for The Grammy Awards and was on Billboard’s R&B/Hip-Hop 100 Power Players list.  He has been featured in numerous publications including Ebony magazine’s Power 100 issue and on the cover of Vibe magazine. Go to http://www.jessecollinsent.com/ for more information on the company.

SOUL TRAIN HOLDINGS, LLC was formed in May 2008 and is owned by InterMedia Partners and a partnership between Magic Johnson Enterprises and Ron Burkle’s investment firm, The Yucaipa Companies. The iconic franchise and catalog consists of more than 1,100 episodes and 40 specials from Don Cornelius Productions, Inc. Soul Train is the longest running, first-run, nationally syndicated music program in television history. During its 35-year run, the show featured lasting innovations such as the Soul Train line and the legendary sign off “Love, Peace and Soul.” At the heart of the show was Don Cornelius, the dancers and influential artists such as James Brown, Al Green, Ike & Tina Turner, Hall & Oates, Donna Summer, Marvin Gaye, The Jackson 5, Aretha Franklin, Stevie Wonder, Elton John, Whitney Houston, David Bowie, Prince, Run D.M.C. and Destiny’s Child.

ABOUT THE ORLEANS ARENA

The Orleans Arena, a Boyd Gaming facility located just west of the Las Vegas Strip, is one of the nation’s leading multi-purpose sports and entertainment facilities and the 2014 recipient of the Venue Excellence Award from the International Association of Venue Managers. In addition, the Orleans Arena is one of only a handful of arenas in the United States to achieve LEED Gold Certification and is part of the largest company in Nevada to achieve SHARP Certification for commitments to safe venue operations. According to Venues Today magazine, the Orleans Arena, which hosts more than 200 events each year, consistently ranks in the Top 10 for ticket sales in the United States and internationally among venues of similar size. These events include nationally touring concerts, NCAA basketball conference tournaments, family shows, motorsports and other unique events. For more information, call 702-365-7469 or click here! Stay connected to the Orleans Arena on Facebook and on Twitter.