Dr. Jacque Colbert is known as a woman who means business! Some know her as a corporate leader who went from serving in the United States Army to calling the shots as an HR Executive for a top technology company. We learned that Dr. Jacque Colbert is a breast cancer survivor who has took it upon herself to create a campaign to bring awareness and raise money for the cure. We caught up with this grateful woman to discuss her mission and why it is so important to her.

One of your missions is to raise money and lobby for research funding for Breast Cancer. Tell us why this is so important to you.

I am dogmatic and passionate about breast cancer awareness and the eradication of the disease. Being in the breast cancer club is not a sorority I opted to be a member of. Yet, I know that to whom much is given, much is required.  I survived breast cancer not to move on and simply live my life. I survived to make a difference. Each week, I see far too many women and some men being added to this “club.” I cannot sit by idly knowing that early detection CAN and WILL save lives.

It is also important to note that people of color and primarily the African American population have a higher death rate than other groups. In fact, compared with white women, black women had lower rates of getting breast cancer (incidence rates) and higher rates of dying from breast cancer (death rates) between 1999 and 2013. During this period, breast cancer incidence went down among white women, and went up slightly among black women. Now, breast cancer incidence is about the same for women of both races. According to the CDC, even though the aforementioned stats were from 2014, incident of death rates remain a concern.

As an 11-year breast cancer survivor, there is no doubt that your journey has only made you stronger in life. What advice would you give to our readers?

I know I may sound like a broken record, BUT; early detection saves lives! Please take the time to do your monthly breast exams. Equally important is Balance. Be sure to put your oxygen mask first- being a superwoman is overrated. Just learn how to live intentionally and unapologetically. Living a balance and grateful life amplifies one’s ability to reduce disease. Gratitude is truly a game change and truly superpower- UNLEASH IT!

Tell us about the campaign you just kicked off A Breast Cancer Fundraising Fashion Gala.

My campaign is all about awareness and raising funds for the cure. This campaign is not new for me in that I have been racing for the cure since 2007 when my father gained his wings due to lung cancer. I ran that year and shortly thereafter, I was running to save my own life. This campaign is an ode to the thrivers, survivors, and underserved women who are financially disadvantaged. My goal is to raise as much funds as possible in support of the Rose, Houston. My very first Gala is poised to bring fashion, food, and fundraising for the cure. The goal is to partner with those who have a vested interested in finding a cure for this disease. I strongly believe that this disease has impacted everyone and as such, I’m asking everyone for their support. 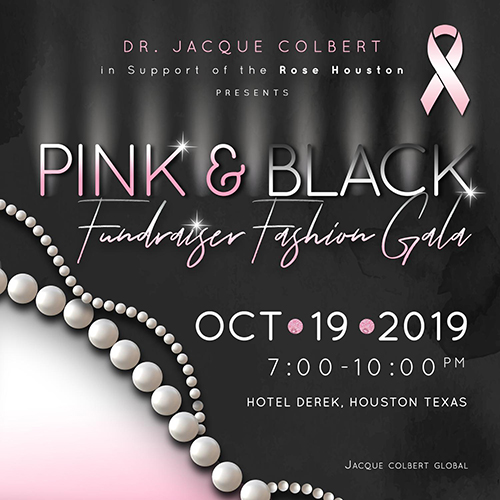 How can we donate and find more information?

People have the option to make a donation in any amount that will go directly to “The Rose” the benefitting charity or you may donate by purchasing a ticket on Eventbrite for yourself or another woman to attend. I also have some amazing sponsorship opportunities for those who may want to go a step further in supporting this cause.

What can we expect to see from Dr. Jacque Colbert in the future?

You can expect MORE! Simply put, I am always focused on enhancing my effectiveness and bettering in all aspects of life. I have been given an opportunity to make a difference and as such, I will continue to work on breast cancer relates issues and those challenges that undermine the equality of women and people of color.

All images by Regina Moretto | provided by Innovating Marketing Group