Carlton Jordan is a man who is known to be unapologetic when it comes to the gay and black community. In his hit web series, POZ ROZ, Jordan created a show where the black community could explore and have an open conversation about living with HIV and AIDS. It’s clear to see that the writer, producer, and director continues to pull back layers of the associated stigma through his work so naturally, we wanted to know more! In this exclusive interview with Carlton, he shared with us the inspiration to create POZ ROZ, why he’s passionate about bringing awareness to others, and much more!

Tell us about POZ ROZ. What inspired the creation of it?

I had two inspirations. One is kind of bad because I was dating this guy who revealed his HIV status to me. I had a lot of trouble processing if I would date someone HIV positive. That was a conversation that we had for a while. From talking with him, I got a sense of the journey that he had to go on as a gay black man, trying to date as an HIV positive male. I thought it was interesting concept. The idea kind of swam around in my head about what it would look like in terms of creative content. One day I was scrolling through xoNecole and there was a story about a young woman living with HIV. She found out at 22-years-old while living in Atlanta. She thought it was the end of her life. She went on a journey of accepting her condition and diagnosis. She found love, got married, had kids, and is living a wonderful, healthy, thriving life. I thought it was so interesting— that was the angle I wanted to enter this world in. I merged those two experiences and felt like I wanted to tell a story of someone finding love with a stigma like HIV and what that world looks like. This is a new concept for people in the HIV community, but it is also the story that a lot of positive people are telling about their journeys now. It’s about managing the disease while finding life on the other side of the disease. I think it’s an interesting, dynamic way to open up that world and see what it looks like.

Why was it so important for you to share stories of marginalized communities within the gay and black community?

I think there is such a spectrum of blackness, right? There are so many stories that you can tell within the black community. I think it opens up a different aspect of blackness. I think it opens up new conversations that are hiding. It’s different enough for people to discover and have a different entry point into what black storytelling can be that’s not your standard romantic comedy or historical piece. It shows characters that exist in the black community and how they interact, live, and thrive together.

Why would you say you are so passionate about bringing awareness to others living with HIV & AIDS?

I think I am so passionate because of my ignorance. In the LBGTQ+ community, my generation’s entry point into what being gay was always had the cloud of HIV over it. I remember the first time I came out to someone. The first thing they asked was, “What about HIV?” Back then I thought it was a normal question but now, I’m thinking wow, that stigma and disease is so attached to a sexuality. It’s seen as something scary, which it is. I think in moving the conversation forward for the people living with HIV as well as the stigma of what it means to have HIV/AIDs, you have to see people you can relate to in their everyday life. The images I remember seeing as a kid (I graduated in 1996), once you get HIV, you get full blown AIDs, and then you die. That journey of the disease is still very prevalent in the black community. That idea of that journey is still prevalent. I want stories to be told and not have people pity them but to see that there is a world where you can have healthy relationships with people that are living with HIV. I think the problem is that if we don’t talk about something, it becomes secretive. That’s how disease spreads. The real passion is me opening up the conversation about sexual health in the black community.

Tell us about the blackness of this project.

I wanted people to see that it’s black AF (laughs). A lot of people think that you cannot create black content with black people, and it be successful and good quality. My two investors are black. My entire producing team include black women. My entire production team include black VPs, black editors, black actors, and black stories. I think that’s important. We as young creators should be using the tools within our community to create great and exciting content. We like to hear about it and see it in front of the camera. You see a black cast and you think it is great, however a lot of the time that is not reflected in the upper level executive and investor side. People say it is hard to find black investors. It’s not reflected behind the scenes either, but I think my mantra is that I’m not just putting black people in front of the camera, but I’m hiring black people of those important roles behind the scenes. It’s important to me to have the crew inclusive and also reflect a spectrum of black folks.

I’m writing season two. I can’t tell you specifically about the big project, but I am working with Regina King on a project. It should be announced soon. I’m excited about that. I will continue to write! 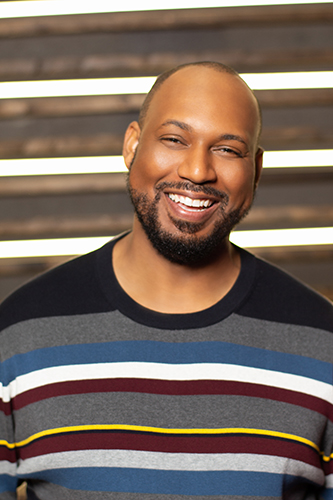