Catching Up with Malina Moye & Getting the Details on Her NEW Single, “Enough”

Singer, songwriter, and guitarist, Malina Moye is no stranger when it comes to Sheen Magazine. Not only is she considered to be one of the top guitarists in the world, but her soulful spirit gave us every reason to love her even more! We caught up with Malina to discuss her exciting new single, “Enough” which has started a global movement!

You were featured in our July/August 2018 Music issue. What have you been up to since then?

So much good stuff! God is good. The Samuel Project film came out last year and we were able to do a ton of promotions with it, which was awesome. Of course, there was also my tour. Now, we just recently released my new single, “Enough” and I am so proud of this record. The good thing is that the single was the end credit in the movie so that gave me my first opportunity to have my song up for an Oscar consideration, which was incredible! I scored my first #1 album on Billboard!

Can you tell the movement and us about your new single, “Enough”?

Amen! Long story short – for me, the one thing my mom always said was “When you don’t see yourself represented, show up. When you think that you can’t, show up. And always know that you matter and you count. This for me is how I live my entire mantra. I saw that women weren’t being represented on certain platforms and it had nothing to do with your talent but more of the fact that people think you don’t fit a certain stereotype. They’re putting certain limits on you and they’re not thinking out the box. This inspired me to write this record. I realized that I matter, I count, and I am enough! I started writing and suddenly I realized that I am not alone, a lot of people feel this way. With this record, I wanted to start a movement to reclaim my own power as a person to say that I’m not celebrating who you think I should be but who I am right now because if I lose sight of who I am, I lose everything. For me in the moment, I am enough. I was blown away with the reaction, the video came out and suddenly, people started creating their own videos to tell their stories. Yolanda Adams put up a beautiful post, Anita Baker sent me a direct message saying she was celebrating the movement, it was amazing! Its Mental Awareness Month so look at yourself and know that no matter what, you are amazing, you are enough, and we all have what we need in order to be who we want to be.

You were handpicked to perform at the Music Master event honoring Chuck Berry. How would you describe that overall experience?

The Rock N’ Roll Hall of Fame concert is one thing but the next biggest thing that they ever do is the Music Master event. To have done that was incredible. Chuck Berry is one of the pioneers for Rock N’ Roll. I had the opportunity to go back and perform and also share the stage with other living legends. It was unbelievable. I would say half of the people on the stage are already inducted into the Hall of Fame (laughs) so for me to be so young and have an opportunity to play was super awesome!

What can we expect to see from Malina Moye in the future?

That’s a great question! There are so many things happening right now but I will say this. For me, I hope to continue living my truth and stay authentic while aligning with global brands that also have that same vision. Of course, the new record and a movie about my life is in development! As a guitarist, a lot of great things are coming through the pipeline. 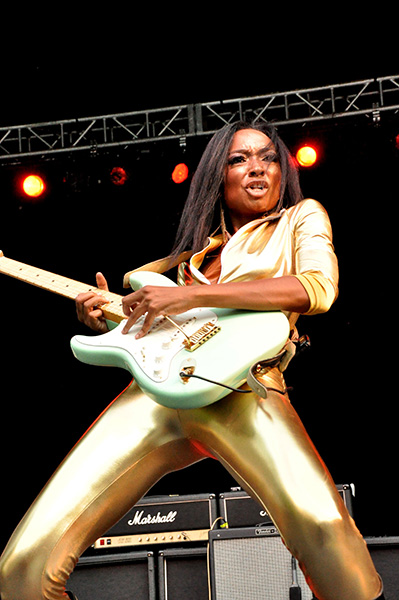 Stay connected with Malina by following her on