Blended Design backpacks are bigger than just kids on a bag. As a brand, they stand for confidence from within and encourage their consumers to love themselves unapologetically. People buy it so their children and students can be empowered in school. It’s more than just a utility; it’s about self-awareness, and “changing the image to change the narrative.” Tune in to our exclusive interview with the founder and CEO of Blended Designs, Casey Kelley.

Tell us about yourself. What inspired the creation of Blended Designs?

Well, my name is Casey Kelley and I am the CEO and founder of Blended Designs. We first started right after my husband and I got married. We did everything for our wedding, for example, we create the save the dates so that they actually tied into a knot. Everything we did was creative throughout the whole process. People suggested that we go into business and do it for other people. After we married, we opened an Etsy shop. We did things for brides and we were the first to do the “Will you be my bridesmaid” and “Will you be my flower girl” puzzles. It totally exploded! It was really just a side hustle. In 2017, my then eight-year-old son asked me to make him a book bag with his face on it. I did some research and the rest is history!

Why was it so important for you to create a brand that encourages others to love themselves unapologetically?

When Carter first asked for a book bag with his face on it, I really kind of dismissed it. With telling him, I wanted to talk him through it and tell him why it was not a good idea instead of me just saying no. He simply said, “There are no backpacks that look like us.” I started thinking about that and we talked about the images that are out there. There are so many negative images out there so we truly believe that if you change the image, you change the narrative. We did research and found less than 2% of the character backpacks that we found at the time (February/March 2017) included a child of color. That’s such a small number! How are you supposed to think positively of yourself when you don’t see yourself and you don’t see yourself in a positive light?

I remember a conversation I had with my niece years ago. She really had it in her head that in order to do well in life, it meant you had to be white or marry an athlete. That was her perception because that’s all she saw. She didn’t believe that black people could be successful. That was an example that hit home. Here I was making six-figures but she didn’t see that because I had a normal-sized home, not a mansion and I didn’t drive a fancy car.

It’s because we as a community don’t see enough positive images of regular people.

What all does Blended Designs have to offer?

Of course, we have our backpacks, lunchboxes, pencil cases, pencils, and fanny packs. My favorite is the Joy Backpack because it’s that brown-skinned girl! I wear my hair in an afro puff but it wasn’t designed after me. It just reminds me of being a regular girl. My son’s favorite bag is the Carter backpack. He won’t even take pictures with other backpacks (laughs). 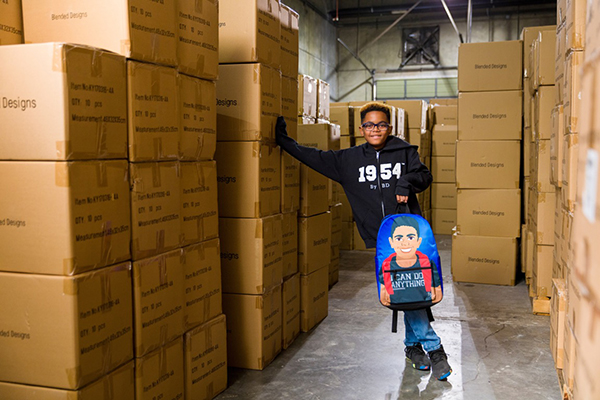 What can we expect to see from Blended Designs in the future?

We hit a million dollars so we’re constantly trying to evolve and grow! The next step is to take the characters into different mediums. There are ten characters we’ve created with different styles but how do we give them more life than just being on a backpack. It’s more than just a backpack, that’s really our goal right now. 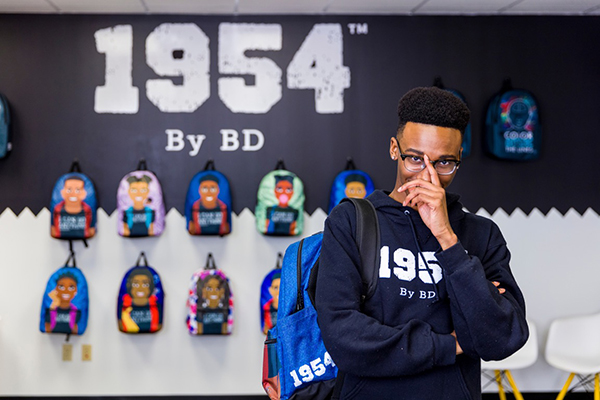 All images courtesy of Blended Designs