Entrepreneur, author, cryptocurrency & DCX enthusiast Chyna Bethley is one you need on your radar. As the owner of Rich University, she has taught people around the world how they too can build their own wealth in all aspects of their lives. Just recently, Bethley took part in a speaking panel for the Steve Harvey Foundation to give others insight into our digital world and provide them with additional resources. The New Orleans native caught up with us to discuss everything from her goals through Rich University, her transition to Atlanta, Georgia, and much more.

What inspired the creation of Rich University?

Rich University was conceived about seven years ago. God gave me the vision for it. I’m from New Orleans, and in the community, there was not popular to even think or desire to be rich. I wanted people to become comfortable with being rich in every area of their lives. Rich is actually an acronym. R stands for royalty: knowing that you are a queen or king in God’s kingdom and really being clear on who you are so you can attract abundance, wealth, and joy into your life. I stands for being inspirational so that you do something amazing and impact other people. C is for being courageous. What I can say in regards to being success is that it requires courage. It’s easy to not do nothing. It takes courage, discipline, and consistency to really go after your dreams, even after you’ve been knocked down. H stands for being humble. Once you get to a point, where you feel like you have accomplished certain goals in life, it’s important to know that you didn’t get there by yourself. You need to bring along people in your journey, who see you now at the point of success. Rich University was designed to normalize the wealth concept within our community and get us comfortable with the idea of being rich in every area of our lives.

Can you share with our readers your connection with the Steve Harvey Foundation?

Steve and Majorie Harvey’s foundation is doing a phenomenal job with outreach and helping our community’s youth. I was asked to speak on a national platform with amazing thought leaders to single moms specifically. I got to speak with single moms during Women’s Month and it was just amazing to be alongside Mikki Taylor (host). She was an amazing host and she interviewed me. It was an honor to serve the amazing panel, they believed that I could provide a financial enlightenment to the women who were raising young girls and boys and give them resources inside our digital world.

What inspired the move to Atlanta from New Orleans?

I was originally born and raised in New Orleans, Louisiana. I relocated due to Hurricane Katrina. It was a devastation, we were uprooted, and really wasn’t prepared. We went to Atlanta against the state’s judgement. They told us to go west but it literally took us about four or five hours to get to Baton Rouge – which is only an hour away from New Orleans. We had people that were jam-packed on the interstate, rushing to get out of the city frantically. We went the opposite way; it was dangerous but it’s interesting because we didn’t have windshield wipers on the car we had. We had to spray Rainx on the window, just so we could see. Imagine not having windshield wipers and driving into a storm. We decided to go east and come to Atlanta. We didn’t think what happened would happen. We’re used to hurricanes and storms so sometimes; you just don’t take it as serious. We had no idea that by the time we got to Atlanta, we would be watching the city go underwater. It was total devestation.

Tell us how you juggle life as a mother, entrepreneur, author? Can you share your best advice?

I believe that during this time, people should consider re-inventing themselves. We’ve done a lot of things traditionally and a lot of people have noticed an abrupt change. Change brings on opportunity. A lot of times we want to hold on to what we’re comfortable and familiar with. The world has already changed. The quicker we identify who we are inside of this new reality, the better we will be at becoming creative and innovative to maximize what’s at our fingertips. Doors have opened up but only for those who can see that those doors are open. Millionaires and billionaires are created during this time and a lot of it has to do with innovation and being open to what is new and what is coming. My goal is to encourage people to open up to the new reality of the way things are already projected to be. 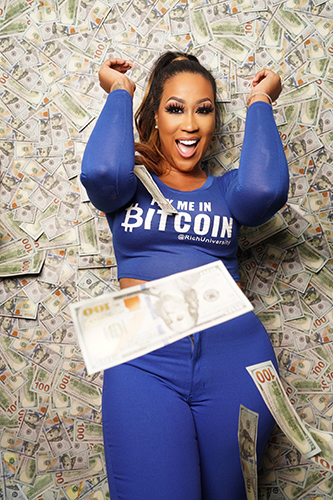 What are you currently working on and what can we expect to see from you all in 2021?

2021 is a big year for me. I’m all about bitcoin. “Pay me in bitcoin,” that’s what I have been telling people. I want to get on the side of it, where I’m not only acquiring but I want to get on the side where I can be paid in bitcoin, like the big boys do. I have been putting people on before Elon Musk. It’s truth. In the last five years, I went to my home city and cities around the world to tell them about getting involved in bitcoin. I always tell them, I’ve been coming for you guys and putting my people on before Elon, so you can expect me to dive into it more. Especially now that the world is paying more attention. I have an e-book that just released. I have more digital projects that are coming down the pipeline. I did a song called “Bitcoin Mommy” that is streaming everywhere. I have new music coming as well. Rich University will expand with our investor academy as well. 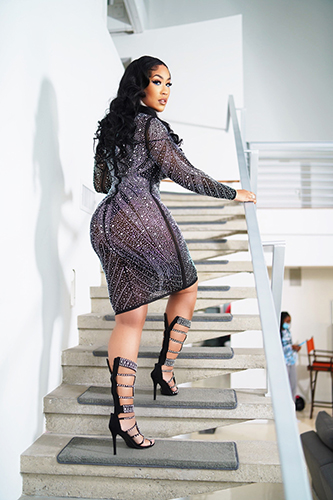 All images by Still Going Designs