Jet Phynx is known as the man behind an independent film company called JEt Phynx Films. The company is the first African American film company right in the center of Wilmgton, Delaware! Phynx has worked with greats in the world of entertainment including Lady Gaga and Kanye West to name a few. When he’s not creating digital content for his clients, he’s out giving back to his community and hometown. We caught up with him to discuss the creation of Jet Phynx Films and why giving back is so important to him.

Tell us what inspired the creation of Jet Phynx Films.

Jet Phynx Films was established four years ago. I was a music artist for 18 years and wanted to try something different. I left the music industry and the camera pretty much fell in my lap. I started shooting my own music videos for myself and from there, someone asked me to film for them. My first year, I was able to figure out the best way to establish myself. Off the rip, I planned to go out to shoot 100 music videos but I only charge $150 just to undercut everyone else who was shooting videos. It worked, in one year I ended up shooting 200 music videos. From that 200, my name began circulating in the music video world. Record labels began taking notice and saw that I had an understanding for branding and creative directing. I built a small team afterwards and now we’re at a point where I’ve shot over 1,000 videos.

Your company is the first African American film company in Wilmington, Delaware. What does this mean to you?

I would say I’m honored first and humbled. The fact that I’m from the state of Delaware and it’s a small but the first state really makes me feel like it’s history. A lot of American history started here. It’s cool to be apart of history, really. When you’re apart of history, it’s forever.

You are always giving back to the communities and your hometown, why is this so important to you?

Where do you hope to see your company in the years to come?

Well, I don’t ever “hope.” We all hope. Where I’m going to see the company is into network and branding whether it’s on television or through the films that I direct. That’s my thing, I’m not gonna stop until I see that and until I’m the Tyler Perry of Wilmington, Delaware. 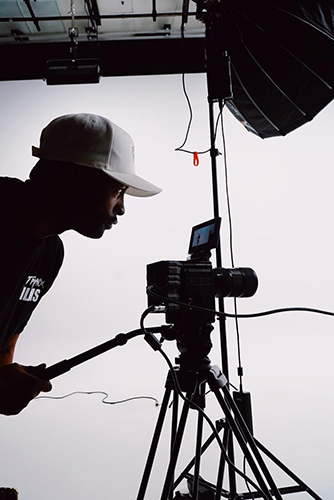