Clifton Powell is an American comedian and actor noted for his many remarkable works like Next Friday, Just Another Day, and many others. He is notable for assuming supporting parts in movies such as Ray, which he received an NAACP Image Award for Outstanding Supporting Actor in a Motion Picture. 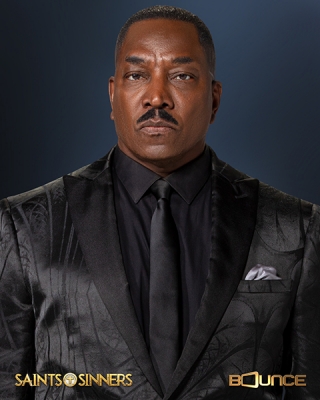 What can we expect from your character in the new season of Saints and Sinners?

Saints and Sinners is a very wonderful show. This is the fourth season so the cast is very close. We just come in, and try to give1 50% every day.

My character Rex Fisher, I try to come in, and find subtle nuances of his character. Rex is going to grow in a lot in ways we couldn’t have imagined this season.

As far as what you said about Rex’s growth this season, will we have to wait to see the character evolve through the trials and tribulations?

Rex isn’t going to turn into a softie, but every now and then you might get a glimpse of Rex maybe referring to God.  I think I have a line that says, ‘I prayed yesterday and I ain’t done that in years.’  So there will be a glimpse of remorse or some kind of sympathy/empathy from Rex going forward.

Did you always know that you wanted to be an actor or did you just fall into place?

I think acting was chosen for me. All I ever wanted to be was a football player. I never had any intentions on being an actor.  I just did it because I didn’t have anything else to do.

I went to a program and they asked me to audition like 50 times, I finally said okay.  I was required to wear a leotard and tights but I didn’t want to wear it, so they were going to kick me out the program.  One of the teachers said, “Let’s not put this kid out.  I think he has potential,” and he took me under his wing.  Charles Brown, God bless his soul, he convinced me to wear my leotard and tights and perform.  I was the worst actor in the program but that’s how I got started.

Your career started in the beginning of the 80s.  With all the movies and roles you played, which one of them was the most challenging?

I think the most challenging role I played to date is when I played Dr. Martin Luther King in Selma, Lord, Selma.  Disney didn’t want me for that role, so I studied really  hard and I went in and sounded and acted like King, and the producers said, ‘This guy is going to be King.’  The problem with Disney was they still didn’t want to pay me.  I turned the job down, but my managers convinced me that I had to do it, so that was very challenging for me.

What is it like now working with the directors and producers of Saints and Sinners?

My producers and directors of Saints and Sinners, we really have a special language.  Because Rex Fisher is a tough guy and is a little out of the box, sometimes I want to make the language a little more dicey and spicy and they’ll have to remind me that Bounce is a great network but it’s still network TV so you just can’t say anything. Other than that it’s been a wonderful time.

So what’s next for Clifton?

Hopefully Saints and Sinners gets picked up for season five and I hope everybody continues to tune in.

Then I’m moving more into development and producing.  I’m working on a script right now called Alabama Blue.  I’m working with a younger producer to help her shape that script and bring in writers and work on casting.  And I may end up directing that movie and a couple of other things I have in the works.

Would this be your first time directing?

No, it’s not my first time directing.  I’m not the most fond of directing.  I’ve dealt with some actors and actresses in the past that was quite frankly disrespectful, so I’m trying to make sure I get the right team of people around me so that when I do decide to direct I can handpick my actors because I know the way I like to work.  When I work I try to be very prepared.

To keep up with Clifton Powell: