Comedian/Actress, Mara Hall Opens Up About Being Diagnosed with Diabetes & Her Mission to Bring Awareness to It!

Actress and comedian, Mara Hall can be seen on OWN’s hit television series, Ambitions and she also appeared on Shonda Rhimes’ hit shows such as Grey’s Anatomy and Scandal! Off first glance, we see a beautiful, hilarious woman who has quickly made a name for herself in the world of entertainment but what most don’t know is that Mara Hall was diagnosed with diabetes nearly 20 years ago. Ahead of National Diabetes Month in November, we caught up with Hall to discuss her mission to bring awareness to it, pushing through life’s challenges to pursue her passion, and much more!

Tell us about yourself. How did you get into acting?

Well, my name is Mara Hall and I am an actress, born and raised in Detroit, Michigan. I started acting because I used to be a high school music teacher in Detroit. I got laid off from teaching music and went back to college to finish my Doctoral degree in Clarinet Performance and I lost all motivation and desire to perform musically. I started auditioning for theatre productions for the college I was at. I started booking main stage plays at this University and from there, I packed all my stuff and moved to Los Angeles 11 years ago!

You pursued your career despite having suffered depression. How were you able to push through the challenges life has thrown at you?

I have been able to push through the depression that I have faced by knowing what my ultimate goal is and knowing why I started. With acting, it’s a God-given talent and a God-given blessing that I’m able to share my artistry with the world. I know how much my skill and my gift means to others and how it affects them instantly. I know that it’s bigger than me. If I keep going and push through while breaking up all the negativity, I know that I can see my eye on the prize. I know that it’s bigger than me. That’s what keeps me going inspite of being in a depressed state from time to time.

Can you tell us about your experience on OWN’s hit show, Ambitions? How would you describe your overall experience?

My experience has been wonderful! It is such a blessing to be chosen to become a series regular on the hit television show. I worked 11 years to get to this point. It’s been amazing working with Robin Givens, Brian White, Essence Atkins, all phenomenal actors. The creator, Jamey Giddens’ words are magical. Being in the company of Will Packer has been amazing. It has been a dream come true. Working with the Ambitions family has been nothing short of greatness.

November is National Diabetes Month. What does this mean to you and how plan to bring awareness to this?

National Diabetes Month is a very important month to me because I am a Type 2 Diabetic for many years. Unfortunately in 2002, my brother passed away from diabetes, he did not know he had diabetes. He died from complications of it. It’s near and dear to my heart and soul. I bring awareness to it by volunteering at different community centers in my community to let people know about it and the importance of maintaining a healthy lifestyle. You really don’t know what’s going on and if you don’t stay up with your numbers and stay healthy, it can be a real detriment to your health and your life. Like I said, my brother didn’t know he was diabetic and he died because he didn’t go to the doctor. People ignore the signs like being constantly thirsty, always hungry, or frequent urination because you just don’t think that those things are signs.

I just want to bring awareness to others so they can prevent it and live a healthier lifestyle. Also every year, I have an auction where I auction clothes and I donate the proceeds to the American Diabetes Association. I will continue to do that in November in honor of National Diabetes Awareness Month.

Yes! I am rebooting my social media movement show called “I Got Something to Say” where I empower through laughter in three minutes or less! I am excited to get new episodes out there for the world to see. You can follow us on YouTube to check us out. 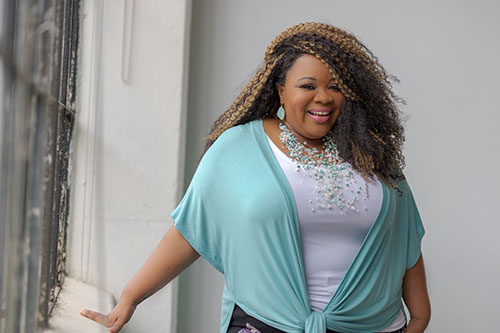 All images by Howell Designs