CurlMix Founders, Kim & Tim Lewis Discuss Their Brand, Experience on Shark Tank, & Why They Were Confident Enough in Their Brand to Turn Down an Offer!

CurlMix founders, Kim + Tim Lewis, are the definition of goals! Why? Because this game-changing husband/wife duo has built a wildly successful business out of love and simply taking a chance!

Kim + Tim’s story started in high school as classmates who quickly became inseparable sweethearts. Eventually, they ventured to college together, and after graduating, Kim landed a great paying job making close to six figures… but it didn’t last long. She found herself not passionate about a 9 to 5 career, so she took a risk by quitting her job with no savings, no new gig lined up, NOTHING!

I know what you’re probably thinking, and it’s probably the same thought I had when I was first introduced to the Lewis’… “What the heck were you thinking, Kim?!”

It became clear to me that Kim is a woman who isn’t afraid to take a chance – a fact that was proven again when she shared that, while trying to figure out her next move, she decided to sign-up her trivia-savvy husband to compete on the hit television game show, Who Wants to Be a Millionaire? Surprisingly, Tim was actually selected to play and ended up walking away with $100,000!

Now, if this couple’s story hasn’t grabbed your attention yet, then get ready because their extraordinary tale is about to lock you all the way in!

After Tim’s win, the couple’s entrepreneurship journey began, and they soon created a social media network for people with curly hair. Unfortunately, after some trial and a whole lot of error, the business didn’t work out, but the fail only fueled Kim more than ever. She was determined not to go back to a 9 to 5 ever again, and she vowed to make money on day one of their next venture… because surely there would be another, right?!

And then it happened. In 2015, Kim + Tim launched CurlMix – an innovative, do-it-yourself subscription box for curly-headed beauts. The concept was a game-changer that gained a ton of buzz and popularity, but after listening to the desires of their subscribers, Kim + Tim eventually turned their best-selling boxes into a full hair care line that pioneered the use of organic flaxseed gel for hair and now boasts a 4-step system to create the best “Wash and Go” style ever. Needless to say, they haven’t looked back since! 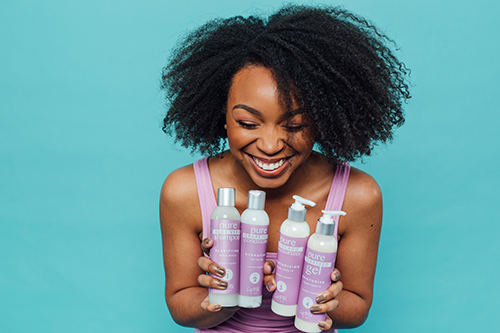 Recently, the power couple was able to position their CurlMix brand as one of the featured businesses on the tenth season of Shark Tank! When asked about their experience, Kim confessed, “My biggest thing was making sure I was smiling the whole time… that and telling myself NOT to cry for everyone in America to see. However, once we were in front of the Sharks, the pressure was ON and I could TOTALLY see how people ended up in tears on the show!”

Sis had all that stress for nothing because Shark Robert Herjavec actually gave them an offer, but to many people’s surprise, Kim + Tim turned it down! 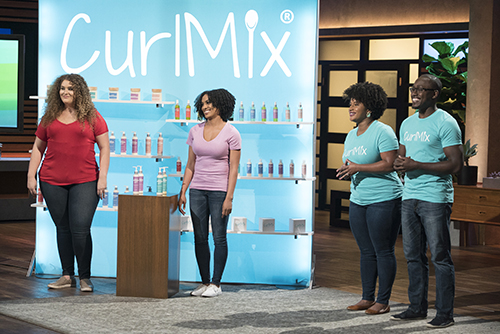 When asked about their decision to walk away, Tim stated, “We have absolute confidence in ourselves and the vision for our company, so having a Shark on the side would have just been icing on top of the cake. Going into the negotiations, we had already discounted our value in order to be more appealing to the Sharks, and to have Robert cut that in half after saying he didn’t know anything about the industry made our decision a no-brainer.”

On the outside looking in, it was admirable to me that these two had so much confidence in themselves and their business to be able to turn down an opportunity like that. I had to know what it was like for these two to work together, not only as life partners, but also as business partners.

Tim stated, “Being married and being partners has been invaluable. We double our efforts. When you have a business partner, you need to be able to trust them like you would in a marriage. You need to be sure that they always have the business’ best interests at heart and will do whatever it takes to make it work.”

Kim added, “We make each other better, much like the saying, ‘iron sharpens iron.’”

We couldn’t end our time with Kim + Tim without asking them to offer their best advice for all our readers.

Kim shared, “No one knows your vision better than you, so make it a priority to ALWAYS stay true to what your destiny calls you to put out into this world. When it comes to business, know what you need and what you don’t. Know why you need the money. Figure out your BATNA (Better Alternative to Negotiating an Agreement). This defines what you aren’t willing to take and what you’ll do in the event that you can’t come to an agreement. For us, we knew we could get a better deal elsewhere, which we did. Months later, we secured a $1.2M investment round led by the CEO of LinkedIn. We would have never gotten that deal if we had accepted the Shark Tank offer.

Tim added, “On Shark Tank, we decided before filming that we wouldn’t give up more than 15% of the business. Robert Herjavec wouldn’t come down from his offer and we knew that it was going to be a ‘no’ after he said he wouldn’t negotiate.”

Following their episode, the CurlMix became one of less than 40 Black women-owned companies to raise over $1M in venture capital funding. They are now on track to hit $10M in revenue by then end of 2019.

Talk about a GLOW UP! 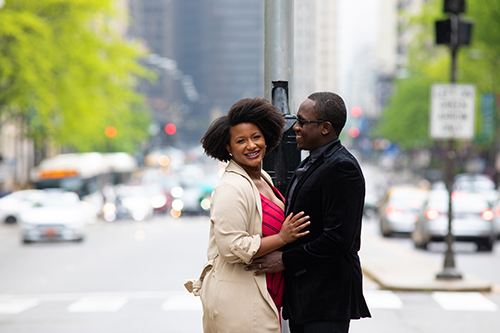