Tell us a little bit about yourself, what made you want to become an actor?

Well, I’m Benjamin Charles Watson and I was born in Jamaica. I left Jamaica when I was ten-years-old and moved to Toronto; I’ve been there ever since! I kind of decided that I wanted to get out of Toronto so then I ended up in Vancouver, Los Angeles, so I’m primarily based in both places.

I’ve always loved creating and doing arts. As a child, my sister and I pretended we were power rangers. I just wanted to be a power ranger so much as a child. I didn’t know what an actor was or how you could be an actor but when I came to Canada, I took drama in school, acted in plays, and fell in love with the aspect of creating a character and story. I fell in love with the performance level, ever since then I can’t stop!

Tell us about your role on Designated Survivor. What can viewers expect to see?

There’s a huge following from season one to season two, which is great! In season three, there are only ten episodes and with that fact, everything is very compact. The writing is a thousand times better, the characters are incredible, and my character works at the EOB, which is subsidiary to The White House. I don’t actually work at 1600 Pennsylvania Avenue, I work at 1650. In the first episode, I get brought onto work with the President to help him with digital marketing. In the first episode, my character is completely out of his league and doesn’t understand the capabilities and capacities of working in The White House. He is the new fish, comes in and has to prove himself to the President and everyone around them. Within a short period of time, you see Dante grow into this dynamic, full character. It’s remarkable and it was a lot of fun to play. Viewers can expect to see something very interesting and something close to life in the sense that we mimic real-life stories on the show.

How would you say this role has challenged you in comparison to other roles you have portrayed previously?

I can’t specifically tell you why until you’ve seen it but this has challenged in a sense that a lot of my morals and a lot of the things that I thought I could not do, Dante has pushed me to do and think at a higher level. There are a couple of scenes where my literal mortal compass has been challenged and I had to step back and realize that Ben has to disappear and that Dante has to take over this character because he has to come to life. It challenged me because I had to put a lot of my feelings as Ben aside to literally take on the role of Dante.

You have so many exciting projects on the way, is there anything else you have up your sleeve you can tell us about?

I started writing, I am in the middle or re-writes but I am writing a show about my life. Everyone kind of does that but the difference is that my story and specifically a lot of black individuals that I have spoken with through Instagram and letters, our stories haven’t been told on television yet. My story and my life as a black and Canadian guy has not been told on television. That is hopefully going to be coming out really soon! 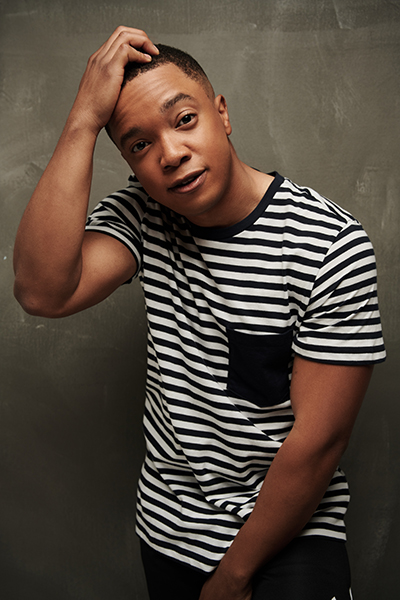 For more on Benjamin Charles Watson, follow him on

all images provided by Persona PR