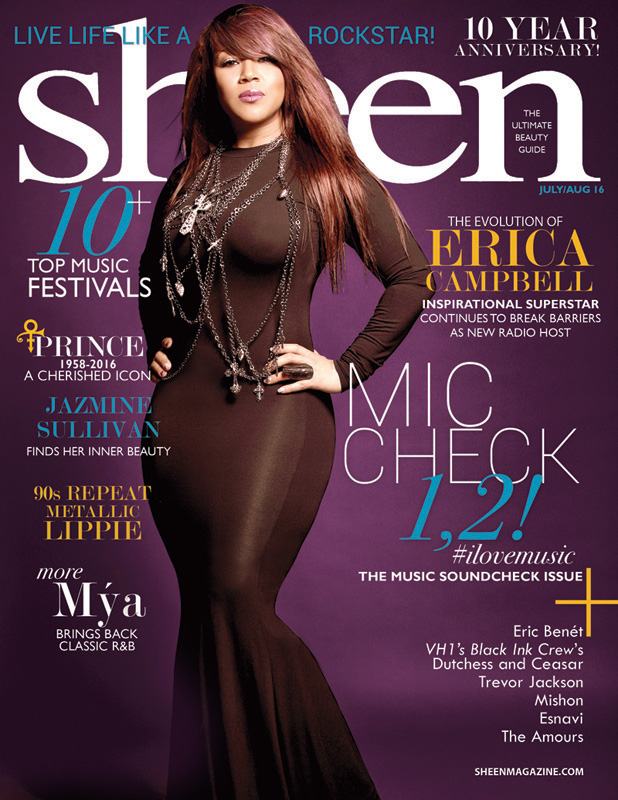 Music touches us emotionally, where words alone lack the ability to reach. In the July/August 2016 issue, SHEEN will have you reminiscing through the concourse of your mind the most euphoric moments inspired by yesterday and today’s musical influences. Being such a staple in the inspirational music arena crossing over into becoming a generational icon, it is only befitting for the Voice of the Millennial Generation ERICA CAMPBELL to grace the cover of SHEEN Magazine’s July/August 2016 Music Soundcheck Issue. Campbell’s contributions in gospel music is unparalleled spanning from top rated reality television show on WEtv to now new syndicated radio host of Get Up Morning with Erica Campbell. This inspirational superstar is the epitome of a modern day woman living her dreams without limits. I was able to kind of beat the odds of what people thought gospel music could be…I took a chance on myself and we took a chance on being different and it paid off, says Erica Campbell.

Outer beauty attracts, but inner beauty captivates; discovered by R&B Powerhouse Jazmine Sullivan transformed her life internally. Plus, tattoos are no longer a subculture in this day and time it is a movement of masterful art. Black Ink Crew’s Dutchess and Ceaser opens up about the impact of tattooing and how it plays a significant role relative to art and culture. Making moves back into the spotlight, R&B songstress Mýa strikes a pose in style as the featured inside cover, where she announces her newest project Smooth Jones and elaborates on what inspired this project.

SHEEN Magazine recaps The 2016 Legendary Weekend, which is the publication’s annual weekend to commemorate the accomplishments of those impacting the world through beauty, style and creativity. During the Kickoff, R&B sensation Mishon graced the stage with two of his hit-singles, one that pumped the crowd with energy and the other, which evoked a multitude of emotions. In the latest issue, he discusses what influenced his most recent EP, The Lost Files (Side 1). Not only was Legendary Weekend filled with musical performances, but SHEEN Magazine was elated to honor Sally’s Beauty Director of Merchandising, Karonda Cook, for her significant contributions to the beauty industry; and Sterling Coleman, Sr. for his success as a serial entrepreneur. Both further elaborated on their successful journeys in this issue.

MANDATE Eric Benét captivates our attention as he discusses love and relationships, American Crime star and singer Trevor Jackson talks new music. The Amours delve into bluegrass soul infused music and their experience singing for FLOTUS. In addition, SHEEN takes a moment to celebrate the life and legacy of legendary artist PRINCE.

Turn up your speakers as we tune-in to SHEEN’s July/August Music Soundcheck Issue on stands June 28, 2016.

Published bi-monthly, Sheen Magazine maintains its influence by always remaining current on what is happening and what is to come with beauty, fashion, hair, and entertainment. The publication seeks to cultivate, educate, and motivate its readers to their personal level of success and excellence.