Watching a movie is something that people often do—however, watching a great movie will have you wanting more and wishing for a sequel! This is exactly the way Annette Galloway’s movie, Just A Friend will make you feel. As a writer and producer, Galloway is not only bringing us a film that will have you reassessing your friendships, but she is also showing us that there is a thin line that many opposite-sex friendships risk crossing over—especially when an attraction is present. The movie poses an interesting question: Can men and women really just be friends? Galloway explains, “I think as we explore these friendships and peel away the layers, this topic may be of more interest to men who get tossed into the friend zone and women who are using the friendship to ease into a man’s heart as they settle for the friendship silently hoping for more.” Galloway’s romantic-comedy is full of life, love, laughs, and drama. We had a chance to sit down with her to discuss her journey to become a producer, the challenges of being a black female filmmaker, and the upcoming Los Angeles red-carpet release of, Just A Friend.

What sparked your interest in becoming a movie producer?

Many times, life is like a maze and we just follow the course until we find our way. I had no idea that I would end up being a film director and producer. I started out as an actress and the roles were limited for black women. This led me to the idea to write something for myself to star in and at that point, I needed a director and a team to help me, that’s when I had to step into the role of a producer to pull the team together. I have always been very driven and ambitious. Once I set my mind to something, there is typically no turning back. The script was written, the team was in place, the locations were secured, and we were a week away from filming my first feature film and the director dropped out. This is where it got tricky because I had a directing class in college, but ever since I could remember, I only wanted to be an actress. I had no desire to be a director. Now, I was faced with finding another director on a no-budget film or stepping up to the plate and directing the film that I was also starring. I thought, how hard could it really be? I thought about Tyler Perry and Spike Lee directing and starring in their movies, well if they can do it, so can I. The show must go on and that is when things changed for me. I began taking on the role of being behind the scenes more seriously and started to hone my directing and producing skills. To my surprise, as much as I enjoyed being in front of the camera, I love being behind the scenes running things as well. 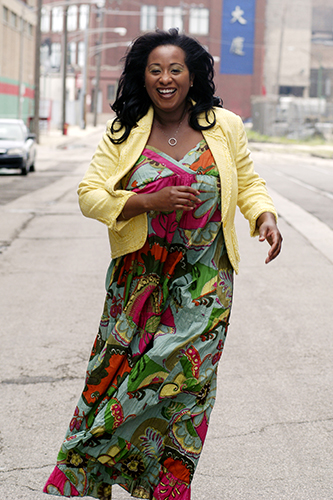 Tell us about the awesome movie you produced and who plays in it. What can viewers expect?

Just a friend is a romantic comedy with a balance of drama that lends to the realities of life, as it addresses the age-old question of, “Can men and women be just friends?” Some say yes and some say no. This movie explores both sides and once you watch, you decide. The movie takes you on a journey, as you’ll find yourself questioning your own motives. It’s fun and it’s relatable because I think we have all been in similar situations at one point or another in our lives. Imagine meeting someone that you are attracted to, but due to circumstances out of your control, you can’t be in a romantic relationship but may decide to be friends just to be in each other’s lives. Something about that person enhances you or makes you feel good to be in their company. As this natural innocent friendship grows, someone may develop feelings, or a significant other may grow jealous of the friendship. Can it survive all of the obstacles that same-sex friendships never have to face? This movie tells the truth from every angle. People from all walks of life who have seen this film are in love with the story and the characters. I’m so excited to finally be bringing this feel-good film to the big screen! I have some great talent in Just A Friend. The leading man is played by Trae Ireland and the leading lady is played by Drew Sidora. The entire cast is amazing! Erica Hubbard, Toccara Jones, Christopher Nolen, James Grant, and Craig Heard, all came together to make my film spectacular. I encourage everyone to take a look at the official movie trailer as well! 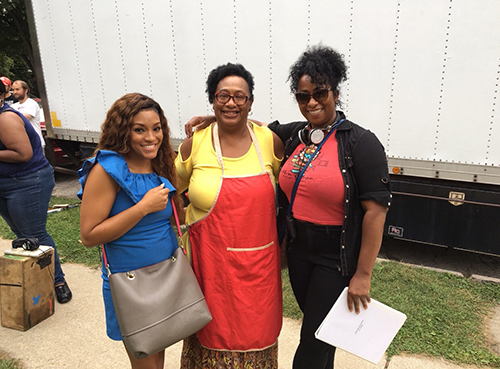 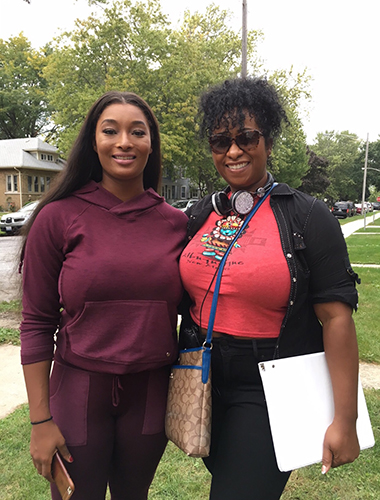 Just A Friend is releasing in Los Angeles, California on August 23, 2019. What made you choose this city and what made you pick the WACO Theater for the venue?

Like it or not, California is the mecca for films! It’s what little girls like me dreamed of as a kid, going to Hollywood and being a movie star. I believe in making dreams come true and to have my movie premiering in Hollywood, California is a big one. After being invited by a friend to the WACO Wearable Art Gala, the vibe was so cool, and I knew I wanted to do something special to celebrate the release of the movie and my birthday being on the same day. I decided to collaborate with my friend and the WACO to move the red-carpet release there for opening night. I worked very hard on this movie and I honestly just want to have a good time and enjoy a wonderful evening doing what I love watching a good movie, eating some soul food and having a glass of wine. If I throw a party doing what I love and I’m the only one in the room, I’m guaranteed a good time, and an even better time if my friends and associates join me in the celebration of Just A Friend and my birthday!

You’re also doing a limited theatrical release run from August 23rd through the 29th at Arena Cinelounge. Tell us about that and which other cities will get to see the movie?

That’s correct, the movie opens here for the official theatrical release. We had the option of doing the traditional red-carpet premiere right at the venue, but as I mentioned earlier, I want the opening night to be a special celebration out of the ordinary and that’s why I chose to go non-traditional. The next City is Chicago with the date to be announced!

Have you run up against any challenges in the filmmaking industry as a black woman?

I think this industry is just challenging period, be it a woman or man. Being black in the entertainment world has its limits for sure. It’s still one of the only industries that in my opinion can legally discriminate to a certain degree. If you read an audition notice it asks how tall, what ethnicity, age, etc. In no other industry can you do this. I’m just saying. The respect level is ridiculous with the guys working for me, finding the balance with them is difficult at best. If I’m too nice they try to run over me, and the moment I put my foot down it becomes she’s a B…or she’s crazy. I’ve learned to navigate through it all and get the job done, most importantly, not take it personal and know that everyone is entitled to their opinion, but that doesn’t make it so. Being a boss comes with its rewards and challenges. 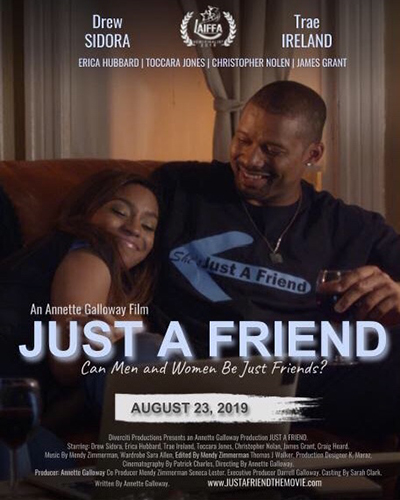 Are there any plans for a sequel?

Funny you should ask! I have written a sequel to Just A Friend. Hopefully, we will get the ball rolling on production soon. I’ll keep everyone posted. In the meantime, come catch us in Los Angeles at the WACO Theater Center on Friday, August 23rd.

To learn more about, Just A Friend, visit their official event page, here! 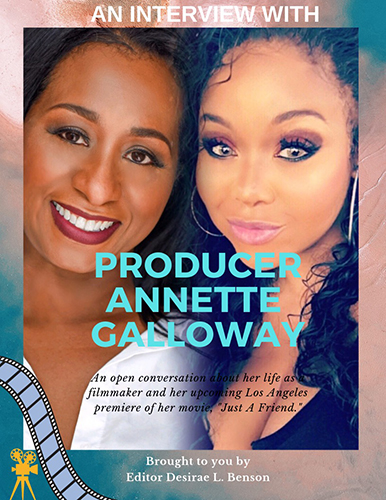 Desirae L. Benson is a writer, content editor, PR representative and entertainment media host, based on the west coast. She hosts her own show featuring four different segments with celebrities, musicians, and people of prominence. To find out more, visit her on Facebook and IG by using @DesiraeBBB or the hashtags: • #DesiraeBBB • #MovedByTheMusic • #PersonOfProminence• For media inquiries,