“I prayed for 20 years and nothing changed until I prayed with my legs. – Frederick Douglass

Since 2015, it has been no days off from heading toward living a healthier lifestyle for 26-year-old Louisiana native, Jonathan Thibodeaux.

During that year he said he wasn’t feeling strong enough to be the man he truly knew he could. Therefore, he decided to take a break from school at Grambling State University and cut off any and everything that was distracting him from becoming healthy.

“I couldn’t live with myself any longer in that state, it was time for me to take control,” he said.

He explained that he just wanted to be the best version of himself in all aspects of life, including mental, physical, spiritual and sexual.

In about the 10th grade, Thibodeaux was at his unhealthiest weight, weighing in at nearly 340 lbs. Around that time he was able to change a few of his unhealthy habits and drop about 65 lbs. and get to around 250 lbs. 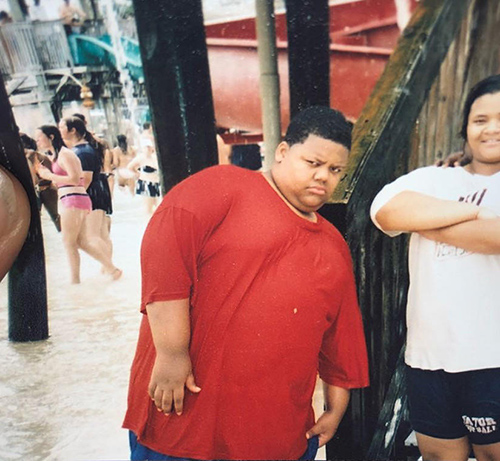 Fast forward to when he went to college, he picked back up some of those habits, unfortunately gaining 29 of those pounds back.

He then restarted his dieting and training, while he was weighing about 279 lbs. He stuck with his program and picked up a pair of boxing gloves and the weight eventually started shedding.

“It all became my new lifestyle, so now I see it as the key to my sanity,” the new fitness warrior said.

Anytime someone asks if he had help on his new healthy journey, he’s happy to say, he did!  His big bro, Torie Arclese and boxing has really helped change his life. Arclese taught him how to fight for his life and have a never give up mindset. He has been there since the very beginning, for his first sit-up, push-up and his first time hitting the bag. 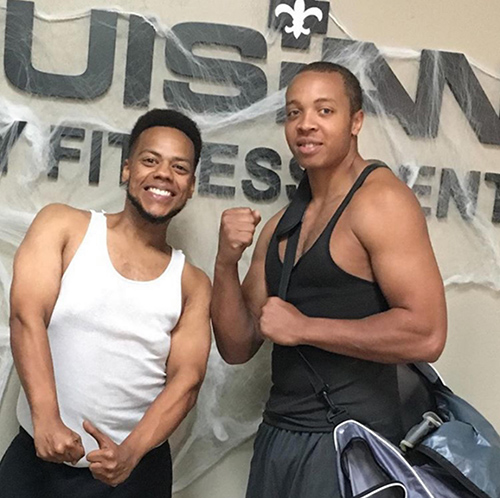 “I really couldn’t have accomplished any of this without my big brother. He helped me build character and discipline. I now understand that the only thing or person that has ever stopped me, is me,” he said.

Thibodeaux and Arclese spent Thibodeaux’s 25th birthday together. He felt like it was his first birthday all over again because the first half of his life was completely dominated by morbid obesity.

When people tell him now that he has boxing skills, it warms his heart.

“I really put in a lot of work for this. I’ll probably never box on a professional level, but it is a great form of self-care that I love,” the now senior at GSU said. 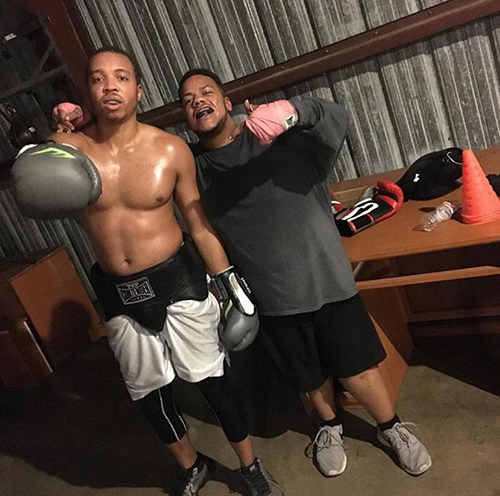 He said he enjoys boxing even more now because he has gained a lot of technique and quickness. In the beginning he felt like he was just really slow and stiff.

Others like his family have also been extremely supportive of him on his healthier life journey, although, at times they are shocked at his solid determination.

“When I’m home, I stay with my mama and grandmother and they sometimes can’t believe when I say, “I don’t eat that anymore.” 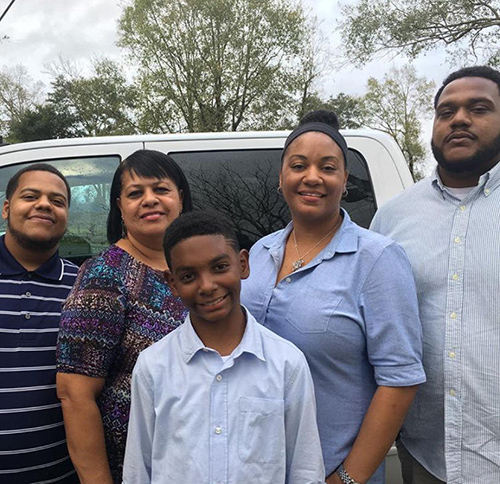 Thibodeaux says that he has to stay disciplined with his dieting because his weight-loss results did not come from any magic teas or magic shakes. Therefore, even while at home with family and all that good food while he’s away from school he has to constantly think ‘dedication’ and ‘consistency.’

He is now eating with no grease or fried foods. He makes sure to eat tons of vegetables that are organically home grown. He encourages many to incorporate fiber in their diets, the needed vitamins, and for those who have a sweet tooth, to try lemon water and/or dark chocolate.

He expressed how important being food conscious is because many of the ingredients that the food manufactures place in food that make it tastes so delicious and last longer is what is unhealthy for us and can potentially kill us if we consume too much of it.

“I miss not caring about calorie and carb intake,” he said. “I sometimes just want to let my inner big boy be free, but I know deep down that I can’t stop.”

The transformation Thibodeaux has made in the past few years is nothing short of amazing! He continuously says he can tell a big difference when he eats what his body is designed to eat, meaning he feels less tired and sluggish.

“No longer do I wake up wishing I had passed away in my sleep,” he said. “Now I wake up and go to work.” “It’s never too late, we can all rise up and destroy obesity.” 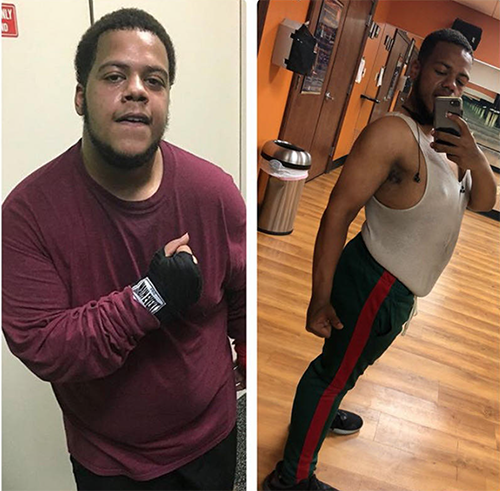 With patience and persistence, Thibodeaux has slowly worked his way up to the adding multiple plates on the gym weight machines. He says he’s really not in competition with anyone except the man he was yesterday. When he first began lifting weights, he could barely bench press the bar.

It’s him vs. him everyday. He goes really hard for every piece of lose skin, every vein, every muscle fiber in his body. It was all EARNED by him!

“It is really an amazing feeling to feel your body change,” he said. “It’s like you can feel your stamina increase and your body getting stronger, it’s really crazy.”

In the later portion of 2016, he was recognized by the Louisiana Family Fitness Center as the “Member of the Month.” 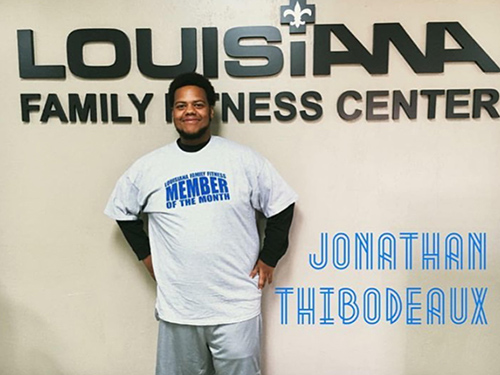 Thibodeaux encourages everyone to workout, he says exercising makes you a stronger person on many levels.

When he looks at throwbacks, they inspire him to continue the path of greatness that he’s on.

He’s been able to “Witness the Fitness,’ with all of his past pain and sadness in the back of his mind to continually motivate him.

Although, he has been going hard in the gym for nearly five years, he still wouldn’t necessarily say getting up and going is ‘easy’. 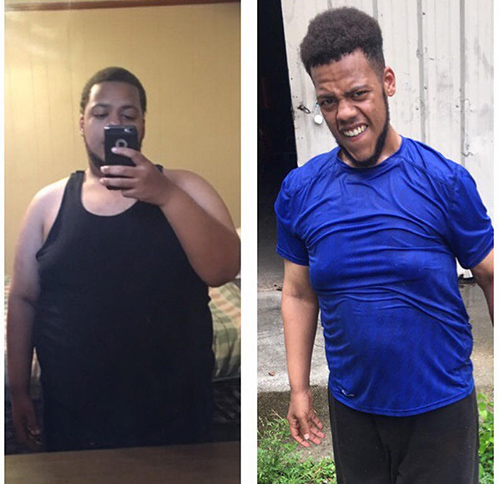 Getting fit won’t happen overnight, but all those who wish to become healthier have to persevere. Changing his lifestyle and mindset were the best decisions he says he’s ever made and if he had to do it all again, he would.

“If you’re like me, just know that the sky is the limit, don’t accept circumstances, accept the ability to chance circumstance,” he said.

When Thibodeaux is not at the gym, during his free time, he is actually an extremely talented guy. He has a huge passion for performing and putting smiles on others faces. He hasn’t been on stage much since high school, but he plans on finding his way back to comedy and acting very soon. He is family oriented and has a great love for good music. He’s really excited about graduating from Grambling State University within the next year and what the future holds for him.

“I thank God for giving me the strength and tools I need to finally defeat this childhood demon of mine,” Thibodeaux said. “I’m never going back; I am ready to chase my dreams.” 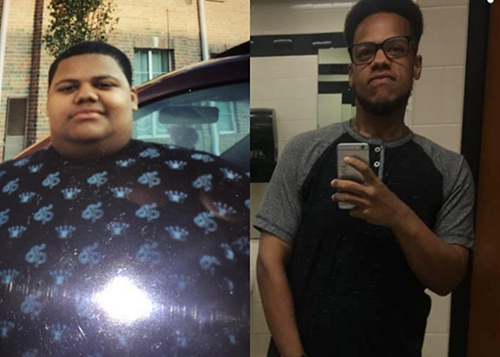 All images courtesy of Jonathan Thibodeaux