Flash Gottii is back with yet another banger for his fans. The Kansas City-bred, Los Angeles-based recording artist returns with his newest single and visual titled “Pull Up,” tapping LA’s own D Savage. The moment Flash heard the beat by DJ Young Mackey, it was a wrap.

Speaking on the standout collaboration, Flash states, “D Savage ended up on the song because that’s my bro. We’re always in the studio together, so it was the perfect timing. I was playing music, and he said ‘lemme get on that’.”

The only thing better than the actual record is the music video, full of “flamethrowers and big ass MAC trucks.” Flash explains, I wanted to show behind the scenes of how we kick it. There was a lot of people on set like K Suave, Chris King, Buddha Bands, etc. my boy Grams took my vision and handled the rest.” 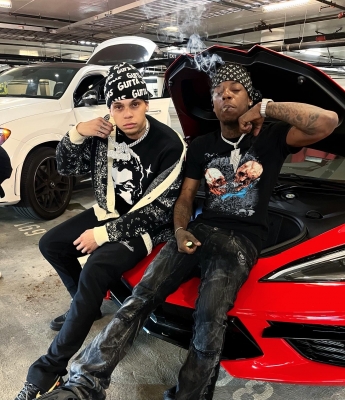 Halfway through 2022, Flash Gottii reminds his fans that big shit is on the way, dropping all summer and all year long. The takeway? Have fun with the record and prepare for what’s in store.

Flash Gottii is a man with undeniable energy, and he’s here to declare his place in the rap game. Talking his shit and flexing his diamonds with each release, the Kansas City native now calls Los Angeles home, locked in the lab each and every single day working and perfecting his craft. While many artists may be tied down to one sound, Flash prides himself in his versatility: singing, rapping, holding melodies, and everything in between.

Coming from true humble beginnings which includes being homeless and seeing his family struggle, it wasn’t until Flash’s mother got cancer that he decided to pursue music full-time. As being signed to 100ENT and the CEO of his own Flashgang movement, Flash effortlessly encourages his fans to stay lit, stay passionate, and remain true to themselves down to the core.

Stemming off an explosive stint opening for the likes of Trippie Redd and Blueface on tour, the rising star can hardly contain what’s in store for him in the new year. His latest release “Talk My Shit” was a standout collaboration with New York’s own Ron Suno, pairing it with an equally braggadocious visual.