Actress Gabrielle Elyse is a star on the rise and if you don’t already know of her, just know she’s making power moves. The Dallas native just recently starred in the horror-comedy film, Snatchers which made its debut at the 2019 SXSW Festival earlier this month. We sat down with the young, ambitious star to discuss upcoming projects and why she is so passionate about using her platform to stand up for what she believes in.

Tell us about yourself! How did you get into the world of entertainment?

This question is so simple yet so hard to answer when it comes down to it! Well, I am 22-years-old originally from Dallas, Texas. I got into the business when I was 12. I started in Texas and I begged my mom to sign me up for an acting class. I was one of those kids who always wanted to do it. However, both my parents being former Air Force and both working in the world of medicine were incredibly apprehensive of a child so young getting into a business that was seemingly dangerous and not at all traditional. So, my mom and I made a bet that if I stuck to acting class for a whole year and not missing one class, we’d look into getting a local agent. She thought she was clever cause the class was on Friday’s and I just got into middle school. She thought I would choose school dances, sleepovers, and other normal kid social things over a weekend class…. Well, being the stubborn child that I am, I stuck to it and got the agents, made connections. Now my whole family and I are here in LA. I’m currently enrolled in college trying to get an education as well!

How has your experience been in the horror-comedy film, Snatchers? Do you mind sharing your role in the film?

I mean horror, comedy, aliens, blood, and explosions?! What isn’t there to like? The whole experience was amazing. I got so lucky. Everyone from the creators down to the poor cleaning crew who had to clean up our blood explosions made it so special. It was truly an environment of genuine people who loved creating things. I will say over and over again that this will be the gem in my career. Mostly because I don’t think I can say that I played a best friend who helps stop an alien race because her best friend gave birth to it after having sex for the first time, ever again! Which brings me to Haley. Haley is this nerdy, opinionated, strong headed, creative, incredibly witty and incredibly smart best friend who helps save the world.

Congratulations on landing the lead role in ABC’s comedy pilot, Woman Up. What can viewers expect to see?

Thank you SO much. It’s my first pilot so I am psyched. I mean hopefully it gets picked up! It’s lovingly written and directed by Zoe Lister Jones (Life in Pieces) and executive produced by Elizabeth Meriwether (New Girl). It is about two former teen moms who have worked their asses off to see their daughters all the way through high school graduation. And now, at 35, they’re ready to make up for the youth they never had, and I play one of the daughters. Do you have any upcoming projects you could give us insight into? Things besides the pilot are happening that I am so excited to share with the world soon. Two of them being my own!

Can you share with us why you are so passionate about breaking African American stereotypes and bringing light to racism?

I’m a proud mixed woman of color. My experiences, its influences, and its history are so near and dear to me. But that’s not all I am. One thing I loved about playing Haley was that she wasn’t labeled or stereotyped. She was just Haley who happened to be of color. She was out of the box, original. It was about the story and what she brought to the table. And at the end of the day, that’s what it should be about. I didn’t see that a lot in the media growing up. Let alone seeing it and experiencing it where I grew up. So being a young woman of color and a creator, seeing the rest of the community create projects like these and speaking out and relaying a message is a bigger picture I am honored to experience and represent.

What do you hope to accomplish in life and in your career?

Honestly, I just want to be a part of and create meaningful and fulfilling stories in any way, shape, or form. I hope in all that I do, I relay to people that “love transcends all boundaries.” Plus, playing a Marvel superhero wouldn’t hurt either. 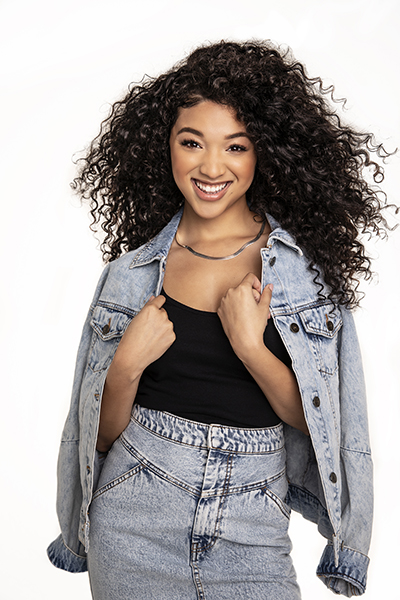 Stay connected to Gabrielle Elyse by following her on

All images provided by Persona-PR