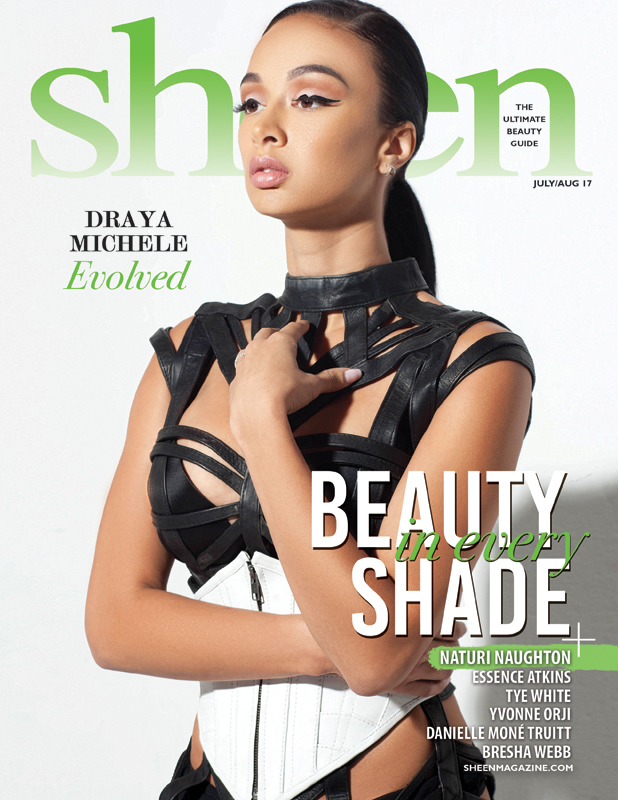 Celebrating melanin in every radiant hue with a conglomerate of successful black-owned brands, beauty, and businesswomen, SHEEN MAGAZINE pays homage to African American culture in the “Shades of Black” issue. The July/August 2017 issue brings readers inside the unparalleled innovation and creative genius of some of the hottest black-owned brands, entertainers, and entrepreneurs.

From cultural appropriation in fashion, down to the best beauty products for a perfect complexion, The Ultimate Beauty Guide declares liberation and an exuberant celebration of the mere evidence that there is beauty in every shade.

In the glossy issue, our featured double-cover glamazon, Draya Michele, talks things she and her fiancé, Orlando Scandrick, do as a couple, upcoming wedding nuptials, how social media has influenced her business and her biggest challenge in becoming an entrepreneur.

“People taking me seriously as a designer and gaining trust with my customers. Letting them know this isn’t a get-rich-quick scheme for me or that I’m not seizing the moment because I have a bit of a fan base. It really is a passion of mine. I wanted to make sure people believed in me.” –Draya Michele

Power Actress, Naturi Naughton discusses walking in her newfound sense of power as a mother to be, and the new season of hit show, Power. In the introspective interview, Naturi Naughton weighs in on how she was able to continue to thrive after past discords, from being exiled from 3LW to the backlash she received from Lil’ Kim after she portrayed her in Notorious.

“Being on a show like Power, portraying a strong mother, has helped build the mother that I will be.” -Naturi Naughton

Nas’ daughter, Destiny Jones, talks about her lip gloss line, Lipmatic, that pays homage to her dad’s classic album Stillmatic. Essence Akins shares her coveted beauty secrets in beauty spotlight, and she opens up about her role in the NBC show Marlon.

The Cut Life’s Tahira Joy talks creating the most influential platform for short hair and the hottest cuts for the summer. Just in time for midsummer, SHEEN educates readers on how to use one of this season’s hottest beauty trends such as our watermelon toner and citrus bath bombs DIYs. From highlighting trendy summer swimsuits in the neutral zone, down to getting killer Olympic abs this summer, we’ve got you covered.

Insecure star Yvonne Orji talks the new season, her spirituality and the strength in being black, while Greenleaf star Tye White describes his perfect summer date, summer activities and gets candid about the black lives matter movement.

SHEEN MAGAZINE’s July/August exclusive 2017 The Shades of Black Issue is on stands now! Get the issue here: Sheenmagazine.com/single-issue