From the field’s sidelines to the newspaper, to GSU- TV, Grambling State University student reporter, Deja Harrison, is taking full advantage of her college reporting opportunities in order to make a lifetime impact as a woman in media.

She is striving to leave her mark in sport’s media, a field where in the early 1970s, a female sports reporter was a rare and highly visible phenomenon according to ESPN.

Not letting that statistic stop her in any way shape or form, Harrison plans on joining women like Jayne Kennedy, Robin Roberts, Jemele Hill, Kristina Pink, Lisa Salters, Pam Oliver and more in paving the way for African American sportswriters and broadcasters.

As a freshman at GSU she got her feet wet by seeking extra hands-on learning opportunities outside the classroom. She began writing for her school’s award-winning newspaper, ‘The Gramblinite’ and it wasn’t long before she found out that, this may just be the place she’s meant to be!

“I remember being excited about two of my stories being on the front of the Gramblinite newspaper at the same time,” Harrison said. “It’s always a good day when you can put sports on the front page, and I also took my own photos!”

She was proud that through working with the Gramblinite, she not only had gained skills as a sports writer, but she learned some photography and video skills to go along with it.

As her interest in reporting grew more and more, day in- and –day out, once the school year ended, she decided that she wanted to dig a little deeper into the field and do an internship with FOX 23 Sports in Hattiesburg, Mississippi. 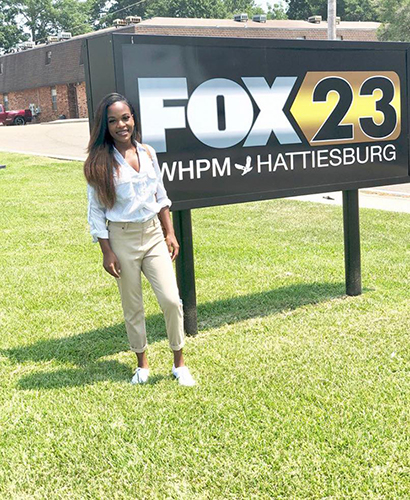 During this internship, she got the opportunity to learn how to set up a camera, conduct interviews, film a video, do on-air stand-up and edit her content for a full news story.

“It was incredible,” she said. “I learned the fundamentals of putting together a news story and how to be creative while reporting.

While there, her mentor was Corey Howard, a 2015 graduate of Grambling State University. He is also a former reporter for Fox 23 WHPM.

“He took me to do several news stories: some that stuck out to me were stories about the Deep South Hurricanes and a softball team who plays in wheelchairs due to a disability that keeps them from playing regular softball,” the student reporter said.

The news stories she created served as some of the footage for her portfolio that helped her land some of next fellowships and internships.

In addition to Mr. Howard, during Harrison’s freshman year she reached out to another great in the business from her hometown of New Orleans, Ms. Sheba Turk. She is a morning anchor at WWL-TV and a new author who was able to give her some influential advice about being in the media industry.

When she returned to school from her summer internship, she has built twice as much confidence and learned more skills to go into her department and leap into more opportunities. She continued to write for the school’s newspaper, but she also joined the broadcast community with the GSU-TV Center and Mr. Alan Blakeney and the Sports Network and Information department with Brian Howard and Santoria Black. 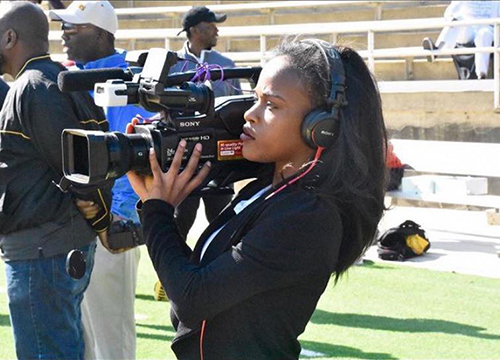 As for her writing, she was ranked 5th for Best Sports Writer in the Southeast Journalism Conference.

“This year there were 412 entries, from 30 universities, including Ole Miss who took home 25 awards, and UL who took home 12. I took home Grambling State’s only award. As a freshman, I was honored and didn’t even know I was going to win something, like what were the odds!”

In 2019, Harrison joined the 2019 Class of Rhoden Fellows. Where in 2018, Miniya Shabazz had the opportunity. The Rhoden Fellows Initiative is a training program for the next generation of sports journalists from historically black colleges and universities, headed by Undefeated editor-at-large and former New York Times award-winning columnist William C. Rhoden. The fellowship, established as part of The Undefeated’s mission to develop new voices and serve as an incubator for future multicultural journalists – is open to outstanding undergraduate students at HBCUs. Eryn Mathewson manages the editorial and administrative processes within the program. She edits print stories, produces the HBCU 468 podcast and oversees scheduling and compliance.

Harrison applied for the position in April 2018 and after maybe 6 interviews, sending in her writing samples, newsreels, etc. she finally got the chance to work for the ESPN brand.

Each story she wrote meant so much to her, but one that really set the bar was being able to cover the huge news that happened right at her university when Shakyla Hill, the former senior point-guard made history becoming the first Division I player to get two career quadruple-doubles. 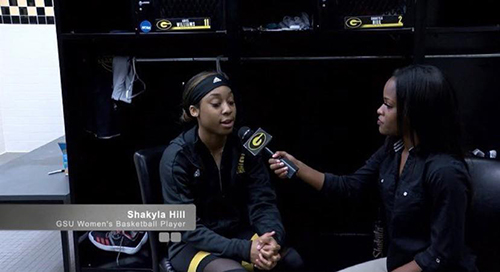 She continues to make those at GSU proud and show much appreciation of her opportunities that she says have come from her internship with ESPN the Undefeated where they intersect sports, race, and culture.

Other opportunities she has gotten include making an appearance on radio station 89.9 KMOJ, ‘The Twin Cities source for Old School, Hip-Hop and R&B in Minnesota about her internship opportunity, gotten a chance to visit the press box and write content for the Dallas Mavericks, tour Dallas hip-hop radio station K104 and has gotten her content she created for Bayou Classic Soul Train line aired BET Network.

We will all be seeing a lot more of her work throughout this season as she recently interviewed Shakyla Hill again as she signed a professional basketball overseas contract with team ZKK Kraijevo in Serbia.

She and fellow mass communication student reporter Donavon Travis also created their own show ‘Deja and Donavon’ through GSU TV. The show is where comedy and and GSU sports meet! 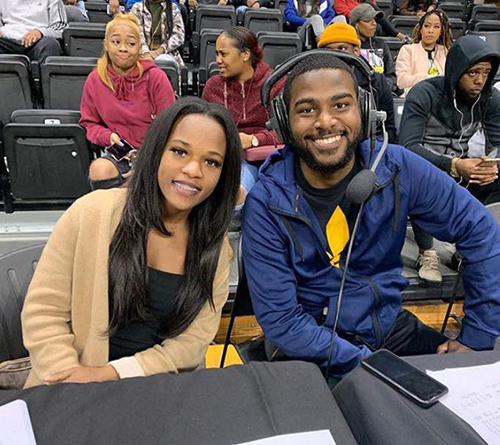 So with so much more in store for Harrison she hopes to keep all sports and entertainment fans informed and inspired.

In a Gramblinite article, Harrison mentioned that two of the many quotes she lives by are “The first step to progress is to remove fear”, and “You can do all things through Christ.”

Stay tuned, Deja Harrison will soon be seen at a scene on a screen near you!

All images by Deja Harrison