In Focus with Filmmaker Marc Cayce

When we think of a filmmaker, we often have images in our mind of video cameras, lighting equipment, and movie sets full of props and people. As a stellar writer and seasoned director, it is certainly true that Marc Cayce has spent a lot of time behind the scenes of many sets, however, his quick-witted mind always remains in front of all the action.

Hailing from the “Motor City,” Cayce has several film credits under his belt. He is best known for his 2006 critically acclaimed movie, “Forbidden Fruits,” starring R&B singer, Keith Sweat, Ms. USA/2010, Rima Fakih, along with other great cast members. Cayce has been in the entertainment business long enough to have made significant and lasting connections with actors from all over the world. He possesses an ingenious and eloquent way of writing that helps people identify with the characters in his films on a deeply personal level.

Over the years, Cayce has continued to live up to his own high expectations by standing out in a way that makes people take notice. He credits his mentor, John Singleton, as the sole reason he went to USC Film School and a big reason as to why he wanted to become a movie director. Cayce shared a memory of Singleton by explaining, “Our last conversation was at Spike Lee’s Oscar party where we took our last picture together. He taught me a lot about creating stories in film and he will truly be missed.” As influential as Singleton was in his life, Cayce took what he learned from him and remains focused on creating films that influence the way we see the world. One of these films, set to release in 2020, is Flint Tale. The storyline explores the injustice and inhumanity surrounding the Flint Water Crisis that has sparked concern and outrage not only in the United States but also abroad. As a native of Michigan, the crisis struck a nerve that propelled him to bring more awareness to what the people in Flint have been dealing with, as so many lives have been negatively impacted. Contaminated water is a serious and deadly issue and Cayce is an advocate who wants to ensure that this situation never happens again. The movie stars, Hawthorne James, Erica Peeples, Titus Thorpe and many more. 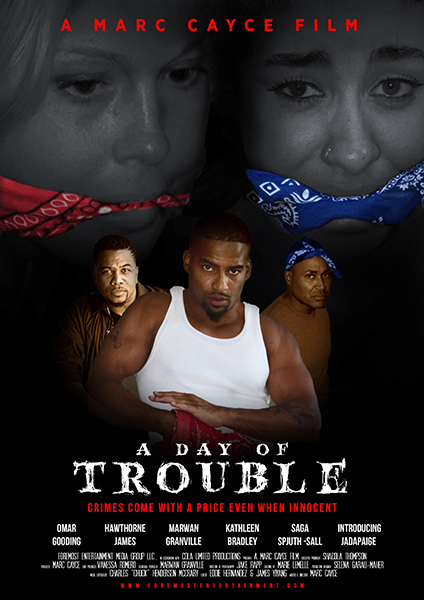 Another area that Cayce is passionate about, is bringing awareness to gun violence. With the recent murder of Grammy-nominated rapper Nipsey Hussle, who was once a member of a Los Angeles gang, The Rollin 60’s, also connected to the Crips—Nipsey would actively speak out about his former gang affiliations and how blessed he felt to have changed his life around. He was such a bright light in his community, and he continues to be admired all around the world. It is important to understand that prior to his murder, Cayce wrote and directed a movie called, “A Day of Trouble.” In the film, Cayce touched on Nipsey’s non-violent stance when it came to gang on gang violence. The story depicts a day in the life of two rival gang members, one Blood and one Crip. To add to the drama, the two rival gang members are cousins. A Day of Trouble is Cayce’s 5th feature film and has a stellar cast with, Hawthorne James (Big Red, “Five Heartbeats”), Omar Gooding (Sweatpea,”Baby Boy”), and Mrs. Kathleen Bradley (Mrs. Parker, “Friday”), and a cameo by Roland Martin (renowned Journalist, Columnist, and Commentator). Cayce says, “I am dedicating my new movie, A Day of Trouble to John Singleton and Nipsey Hussle, two Kings of Los Angeles who passed too soon.” Look for the movie to be released sometime in the late Fall of this year.

I had the chance to catch up with Cayce in a one on one interview about his life as a filmmaker, his thoughts about his current projects, who he plans to work with next, and his take on the many facets of entertainment.

Check some of it out here:

Why is it important for you to bring out a film like, “A Day of Trouble?”

Well actually I was raised initially in Detroit, but my adult life I was in Los Angeles. I was around the gang culture in the early ’90s and late ’80s as well, so I was kind of brought up around it. I saw it during the height of it when there was a lot of drive-by shootings and it was madness in Los Angeles, it seemed like the place to be if you were in a gang. I thought it was important because I could never understand why I would want to kill someone that wears a blue hat and I have a red coat on or a jacket. It just seems odd to me when we are the same color. Then I met people that had relatives who were in different gangs and they didn’t talk to each other…and I was like, ‘Wait a minute, but that’s your mama’s brother’s son.’ One instance, a young man told me that if he was washing dishes and there was a red cup in there, he wouldn’t touch it because he was a Crip. I was just thinking of how ludicrous that sounds. So as years passed, I had a burning to desire to talk about the Crips and the Bloods and the gangs in Los Angeles. I used that experience from that young man that has a first cousin, with one being a Blood and one being a Crip. In the movie, one of them is out of the game and trying to get his life together and is constantly telling the other character that this is not your family, I’m your family. A lot of times, these organizations or gangs are that person’s family, they will die for them, live for them, eat for them, and it becomes part of their culture and life.

How is “A Day of Trouble” bringing awareness to gun violence?

Well ironically, I bought Nipsey’s album about four or five months ago, his Victory Lap, and when I heard the song, “Grindin’ All My Life,” I had really wanted it in my film. This was prior to anything negative happening to him, it was his debut album in a sense, about who he was. I had to fight my producers to get the song in the movie, but we got the song in the opening credits of the movie, and because he was in a transformation in his own life, against the gang, my lead character shares the same stance that he does. He’s done with it and now he’s trying to promote to his cousin that it’s time to move on and do something better with your life. Ironically, Nipsey’s real life is what this character portrays in this film that was written years before Nipsey really got his fame. It was almost like this magical or spiritual thing that led me to Nipsey Hussle’s music months before this happened to him. I didn’t just jump on the bandwagon, I literally went to Best Buy to buy a physical CD six months ago, because I wanted to look at the pictures and get a sense of where he was coming from.

There is so much more. To listen to the full audio and video interview, click here! 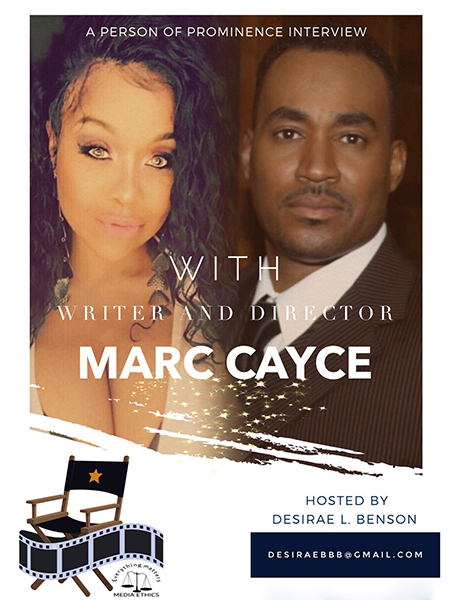 Desirae L. Benson is a west-coast based editor, entertainment media host, public relations specialist, content editor, and the host of her own show, “Moved by The Music” where she interviews mainstream and indie artists who are doing great things in the music industry. She also has two other segments of her show which include, “The Person of Prominence”, “The Actor’s Spotlight,” and “Comedians Corner.” To learn more about her, you can visit her website, connect with her on Facebook and Instagram: @DesiraeBBB