Javicia Leslie on Her Exciting Roles, Making the Big Move to Los Angeles & Role on CBS’ ‘God Friended Me’

German-born actress, Javicia Leslie grabbed her dreams by the horns and took full control! In order to pursue a career in entertainment, she packed up her bags and made her way to Los Angeles, California to begin her journey. Leslie’s captivating personality and powerful talents can be seen on CBS’ hit television show God Friended Me. We caught up with the actress to discuss her role on the beloved show, her recent role in the film Always A Bridemaid, and much more!

Tell us about your role in God Friended Me.

I portray Ali Finer, who is sister to Miles Finer. The show is about a guy who is friended by an account on Facebook called God. From that point on, that account ends up sending him friend suggestions of people, who he ends up having to help. I play his younger sister. I am a psychology student, also working at a bar that I manage. I am the connection between my brother and father, and the rest of the cast when it comes to trying to figure out their own issues, how to address each other, and stuff like that. Apart of that comes from her aiming to do that for a living, that’s Ali.

Last season you got a glimpse of the things she had going on. She was having issues when it came to not telling her father she wanted to move in with her girlfriend. I think the audience believed that was the reveal of her being a lesbian but that wasn’t necessarily what it was supposed to be. Everyone she was around knew she was a lesbian. It was more so the reveal of her living with her girlfriend without telling her dad. You kind of really see Arthur and her struggle with their relationship because of that. Going into this season, it’s really about Ali figuring out who she is in this situation. She’s been raised in a specific church she’s been going to all her life but this is the same church that lost a lot of parishioners when they found out that that Ali was gay because they couldn’t understand how a pastor could have a gay daughter. He didn’t know that she knew but she knew.

She is at a point in her life where she’s trying to figure out things for herself. The first few episodes of the first season, she finds a church home that is more inclusive to what she feels like needs to be presented. Also, when it comes to what she wants to do for a living. She spent the last few years going for psychology so when she goes to turn in her thesis, her professor tells her she hasn’t been focused the last year. This lack of focus makes her wonder if she’s doing what she really wants to do. You watch her go through this journey of finding herself again all while trying to be there for her brother and father, and the rest of the God Squad.

For the rest of the season, it’s going to get interesting because she’s going to end up having to make big decisions that affect everyone including myself.

Tell us about your recent role in the film, Always a Bridesmaid.

I play Corina James and basically she is a girl who is always the bridesmaid, never the bride. She’s always there for others except herself. She doesn’t take the time to create a relationship for herself. She’s always supporting others. In this movie, you see her go through a journey in realizing its time for her to focus on her own relationship and self. Yvette Nicole Brown, who was the writer and pastor in the movie ends up being Corina’s voice of reason throughout the movie. She’s there to let her know its okay to fight for your own love, it’s okay to fight for things that make you happy, and it doesn’t always have to be about everyone else. Honestly, Corina was carrying a lot of weight from her parents’ relationship, which a lot of people do. When your parents divorce, a lot of times children put the blame on themselves. You really watch her go through that. The fun part about this movie is the comedy. The entire cast is amazingly comedic actors/actresses and you get to see this hilarious situations play out with some of your favorite actors.

I’ve always wanted to be an actress. It’s something I’ve always wanted to dabble in, I hate the word dabble (laughs). It’s something I found myself going back to since I was a child. I think that I got to a point where I was over working a nine to five. I was watching other people do the things that I wanted to do and it wasn’t making me happy. I would see commercials and television and in my mind I knew I wanted to do it. I started off by doing my own theater plays in DC, commercials, and blogging to create a platform for myself. I used to host a live music show so I kept doing things to give myself a platform and stage to perform. It got to a point where I was like, I know what I want to do so in June 2011, I bought a one-way ticket to Los Angeles for January 2012.

Right now we’re in season two of God Friended Me. I am starting another show that I did last year, which will be season two for that television show. It’s called Family Business. I start filming in two weeks. 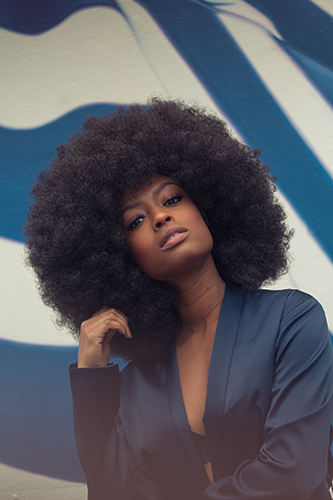