Jayne Allen Writes Us into “Black Girls Must Die Exhausted”

Her artistic creativity introduces itself long before you know her name, Black Girls Must Die Exhausted – a statement that reigns true to so many women who are underestimated, overworked, and simply put – unvalued. When I picked up Jayne Allen’s book I wasn’t expecting a narrative relating to my everyday life. The book embodied my own challenges of everyday life that I thought most wouldn’t relate to. However Jayne captured them all. The book creates a conversation, one which isn’t had often enough. Black Girls Must Die Exhausted rings bells, letting us all know – our stories are heard and are continuously being told.

When Jayne entered the phone call my anxiousness was quickly met with relief as she gave me the vibe of an old friend. While being witty and levelheaded she still was extremely relatable and fun. I first asked about the concept of the title:

“When I was trying to decide on a title for the book I wanted something that would reign true foundationally when you heard it, especially within my target audience. I wrote the book first for myself and I’m a black woman (laughs). Given the time we’re in I think it’s the best of times and also kind of the worst of times in some ways. There are just so many issues that we’re confronting, navigating in new spaces, discovering new versions of ourselves that we’re having to step into and reconcile. I wanted to find the truth of what that feeling is and for me it was exhausting. I feel the weight or the burden of all of the confluence of issues that we have to face as a black woman. As a woman and as a black woman, we deal with things doubly. We don’t get to skip over anything (laughs). We don’t get to fast forward through the commercial. We’ve got to watch the whole movie (laughs). It’s exhausting, so I wanted to make that an acknowledgement first for myself and for the audience that I was hoping to reach. Ultimately, a hopeful and positive way of looking at it but I wanted to start with an acknowledgement.”

While different characters were an essential part of the novel – race played a pivotal role in the book’s narrative, as the main character, Tabitha, has a grandmother who is white.

“I needed a character who could take us on a very unique journey through an examination of race. So for Tabitha, I knew I had to give her a close white family member – a secondary principle character. At first I thought maybe it would be her father, but that wasn’t really going to give her the identity she needed to have. It wasn’t the relationship I needed to give the intimacy for some of the conversations I need to have to show. I realized her grandparent should be white, that relationship was pure love. There’s an intimacy there and an honesty there that is unique. Granny Tab was the second character that came up for me and as I examined Tabitha and kind of built her story, the rest of the characters just kind of showed up along the way.”

Jayne’s story to creating a masterpiece began from an early age – being enamored by the idea of writing and creating, using her imaginative and artistic ability. Black Girls Must Die Exhausted is an anthem for everyone – even if you aren’t a black woman, you’ll learn more from this book than most, lessons that cannot be taught.

With much enthusiasm and anticipation, I am so excited to announce the release of Black Girls Must Die Exhausted – And Baby Makes Two. Click here to preorder your copy today! 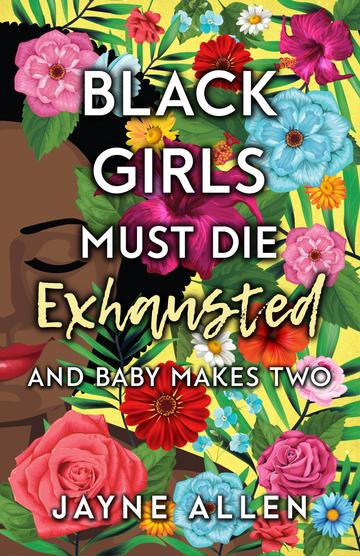 For more information on Jayne Allen: