Nearly 70 thousand attendees were able to catch the beloved and stunning Grammy Award winning icon deliver an incredible performance at the unprecedented and unparalleled sports and entertainment facility in Inglewood, California. Watley received non-stop cheers from the audience at the game. 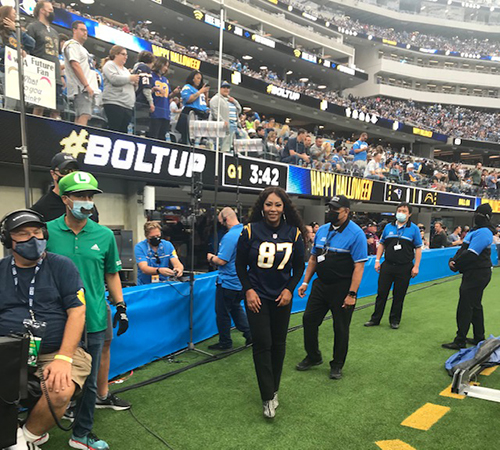 EP entitled, Renderings, which consists of five tracks, kicking off with the brand new anthem groove, Not A Single Day Goes By, seamlessly shifting to other thoughtful tracks including “Whenever” and the empowering “A Beautiful Life” remixed by internationally renowned DJ/Producer Alex Di Cio’.

Renderings, the mini collection of dance mixes, is now available on all digital platforms via the Avitone Recordings label imprint.

After positioning herself as one of dance music’s most prominent and authentic female artists, the iconic powerhouse’s discography includes numerous global chart- topping hits.

Hits such as Looking for a “New Love,” “Don’t You Want Me,” “Some Kind of Lover,” and “Still a Thrill” have earned her multiple hits and awards.

This month, Watley celebrates the 35th anniversary of the release of her solo debut blockbuster single, Looking For A New Love. The platinum selling single was nominated for American Music Awards, NAACP Image Awards to name a few.

Her debut album produced three top-ten singles on the US Billboard Hot 100: Some Kind of Lover, large Grammy Nominated, Looking for a New Love and Don’t You Want Me, 4 Top 10 R&B Singles including Still A Thrill: All Top 10 Hot Club Play Singles countless nominations and subsequently garnering the Best New Artist Grammy and becoming an instant influential style template for many.

You can connect with Jody Watley on her social media platforms: @jodywatley

All images provided by Jody Watley