JP Castillo on Combining Cultures in Music, Opening Up for Jennifer Lopez, & More!

Music is in JP Castillo’s blood. No, really. His mother is a singer and his father is a drummer. JP on the other hand, well I guess you could say he’s a jack of all trades. Growing up watching his parents’ love for music inspired him to want to enter the world of music but becoming a singer wasn’t on the top of his list. In this exclusive interview with JP Castillo, he dished on the shift of his musical start, his musical influences, and much more!

Tell us about your start in music.

I got started in music very early on without even knowing it because I have a very musical family. My mom is a singer, she toured and recorded with a lot of latin artists. My dad is a jazz drummer. We’re from Costa Rica, so there they were known as musicians. In the house, there was always rehearsals going on. As I was growing up, my mom had her own band so there was always great musicians in the house. I got to see and learn what it was like to be a musician. It was a normal lifestyle for me. There were late nights where I would fall asleep in the studio with my dad.

When I got to college, I wanted to be a drummer and kind of follow my dad’s footsteps. I messed around with singing a little in church and I sang in choir in high school but I wanted to be a percussionist. I was in a performance group in college and we were going to do a concert in front of the whole school. We needed a singer for one of the songs that we were performing and I volunteered, the group wasn’t even aware I was a singer. I ended up doing it, we performed a latin song from The Mambo Kings soundtrack. People went crazy, I went crazy (laughs), it was just a great experience. I ended up singing two or three songs for that concert and I fell in love with entertaining and performing. The next semester I changed my major with an emphasis on Voice and Vocals. I studied songwriting and it was a shift from there!

With that being said, who would you say are your musical influences?

Well first and foremost, my parents. Who they are and their musical careers have a great influence on me and my career. Outside of that, I would say Michael Jackson. I always gravitated towards him as a kid. I watched his videos and studied him. At a young age, I loved Freddy Mercury. My mom bought me a Queen greatest hits CD and I loved it! He is a great singer and entertainer. I also love Justin Timberlake. 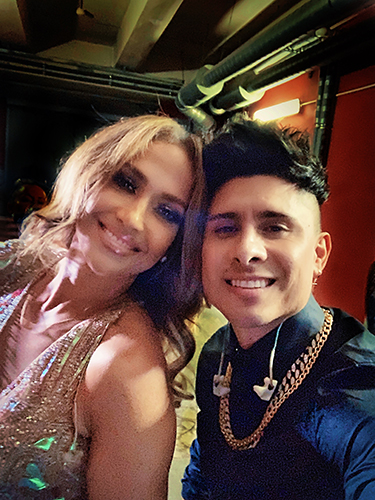 You opened up for Jennifer Lopez! How would you describe the overall experience?

It was amazing. It was a humbling experience. It was a combination of this year and how it’s been going. People have been discovering who I am as an artist and it was a great learning experience to see her perform and be in that environment. Traveling the world and opening up the show was a dream. Being able to expose my music to so many new audiences was incredible. We were in Russia, Egypt, and many countries. Even though my lyrics may be in a different language, the music and vibe was great to see translated to others. 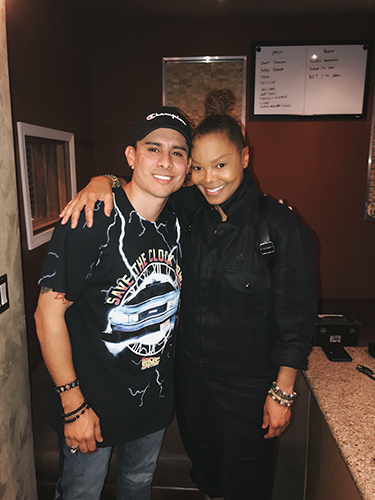 You’ve also worked with Janet Jackson in the studio. What was that experience like for you?

That was a dream come true for sure! I grew up studying Michael Jackson and loving the entire family. I was in love with Janet growing up, she was my crush (laughs). It was my first time meeting her and it was surreal. I imagine that it was what it would have been to be with Michael Jackson as well.

I’m working on new material right now. I’m releasing songs in both English and Spanish. I’m combining my cultures and I am really just excited to show what’s coming next! Keep up with me as I release new material on social media.

All images provided by JP Castillo