LaToya London is Bringing Us Some Feel-Good Freshness with Her New Single: “The Breeze”

LaToya London is back with a new single that releases today! She is a musical powerhouse with the voice of an angel, that we have known and loved since hearing her on American Idol. As a stellar singer and an incredible actress seen in many theatrical performances that range from—the original Broadway tour of Oprah Winfrey presents the Color Purple, the regional production of The Bodyguard and in Tyler Perry’s movie, “Madea on the Run,” along with so many more—London has made a memorable mark on our hearts that keeps us enamored not only with her voice, but also with her class and style.

London has grown so much from her experiences and understands that there is power in taking control and navigating her career on her own terms. She expresses herself through her music in a way that will be appreciated by all who listen, while the depths of the passion conveyed through her voice, will be easily felt and enjoyed. She is comfortable in her own skin and presents us with her new feel-good single, “The Breeze.” We had a chance to sit down and talk about her life, what she has been up to lately and what to expect from her beautiful new song.

For those who don’t know, your interest in music began very early. What was it that attracted you to music and singing?

So, wow, I was really young, and my mom told me that I was singing, “Double-Dutch Bus,” which is a really old song from the eighties, when I was like two. She heard then, that I had an ear, because I would copy things from the radio to a “T.” Whether a child can pronounce it or say it or not, it’s probably just baby talk, but they’re on top of it. When I was about four, my mom’s friend noticed that I had a voice. My mom was just floored, and from that point, I was really encouraged to sing. I liked to do it and I got a great response from it, so I was like, so is this what we’re doing? Yep, this is what we were doing! So, it just developed from there and on my own, just listening to albums and studying. I just wanted to sound like the people I heard, and I didn’t realize that I actually was teaching myself and sharpening my own skills. Powerful singers like, Anita Baker, Whitney Houston, Mariah Carey, En Vogue, those are some of the people who influenced me.

Speaking of powerful voices, on American Idol, you were coined as one of the Three Divas, along with Jennifer Hudson and Fantasia Barrino. Do you often look back to your time on the show as it relates to your career now? What is the biggest lesson you received from that time period in your life?

I do look back and reminisce. The biggest lesson I would say, is to just continue to grind hard. I kind of took a step back and let things happen the way they happened, but I wish I would have put in a lot more effort during that time. So, now I’m like, let me put more effort back into it, so I’m back now!

We are all very excited about your new single “The Breeze,” releasing on Monday, August 26th. The talented, David Stevens AKA, Mr. Guitar, produced and co-wrote the song and you even have the amazing Najee on the flute. What was it like to work with David and Najee on this project?

Let me start with David, he is just really talented, it was crazy how we met, it was over social media. He inquired about working with me and I was like, yeah! I checked his stuff out and saw what he was about. It was really a great match. Since we’ve been matched up, we’ve written other songs, and just our personalities and the way we work together, has just been great. I’ve been really blessed, out of the sky, you know, like, hey…thank you guys and let’s do this! I actually knew Najee from back in the day, like when I was younger, growing up, being that I used to sing everywhere. We were on the same event at one point, I mean, I was like a teenager, and I met him then. After American Idol happened, I met up with him again and reminded him of the prior event years back. He was like, oh okay, we should perform. We exchanged numbers at that point and said we were going to work together one day, and 15 years went by! David and I were thinking about who we would want on this song. So, when Najee’s name came up, I was like yes, of course! Najee plays multiple instruments, so he chose the flute on this one which was so perfect. He just did such an amazing job, because that’s just what he does, he’s a legend. He turned this song into something completely beautiful—even more beautiful and I’m very honored and thankful for him to be on this.

Mmmm…girl, I am a grown woman! I have learned so much about myself, I’ve grown so much internally and externally. I’ve grown in the way that I process things, how I handle myself, how I handle other people.

I’m thankful for that, it’s a beautiful thing when you can grow and change. I’m a completely different person now, I’m more open and comfortable in my skin.

What can people expect from your new single, “The Breeze” and how it will make them feel?

I believe people will relate to it. The words in the song are about what we go through every day, in general. We have down periods, the stress around us, the hustle and bustle and we just want to get away. I feel like it will help relieve their stress or give them encouragement to relieve their stress. You know, go toward the breeze, go to the beach, take a ride, roll the windows down, turn the air-conditioner on—feel that breeze, you know, something! So, I think relaxation and just inspiration to want to get away and leave the stress behind.

Everyone likes to take sneak peeks into people’s lives—what’s a day in the life of LaToya London like? Any hobbies or things you love to do?

Honestly, I love relaxation time, so that means surfing the net, researching things, reading, listening to music, singing. I love domestic work believe it or not, I love to cook, and I’m constantly cleaning dishes and so forth. Just being at home in my solitude, and maybe that’s because I’m busy a lot and I travel all the time. Me-time is really important to me.

As we all know, music is everywhere, it has a special place in our hearts and minds and is known to evoke all kinds of emotions. How are you personally moved by the music?

I’m definitely moved emotionally by lyrics, also chord progressions in music, where the music goes sound-wise. When you’re watching a movie, it can spark emotion within you. The score, that music that is underneath the movie, if that wasn’t there, the movie would have a completely different effect on you. But because that music is in there, it gives you a whole different feeling during the scenes and the emotions you’re supposed to feel in the scenes. That’s just how beautiful and influential music is, so that’s how music moves me.

For more information of LaToya’s single, “The Breeze,” visit her on her official website or her Instagram page.

For the FULL AUDIO INTERVIEW that includes all the questions and answers, please click the highlighted link for my channel and subscribe for alerts. 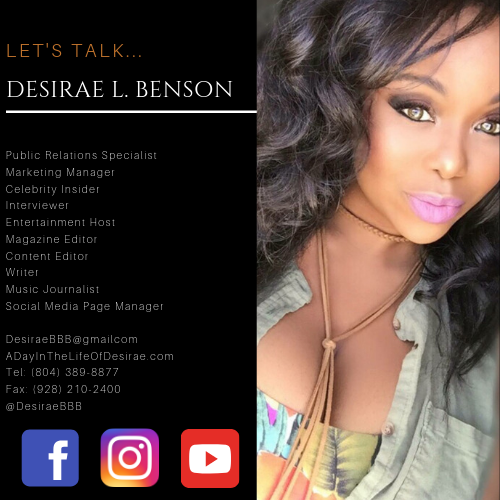 Desirae L. Benson is a writer, content editor, PR representative and entertainment media host, based on the west coast. She hosts her own show featuring four different segments with celebrities, musicians, and people of prominence. To find out more, visit her page on Facebook and IG by using @DesiraeBBB or the hashtags:  #DesiraeBBB • #MovedByTheMusic •#AdayInTheLifeOfDesirae•