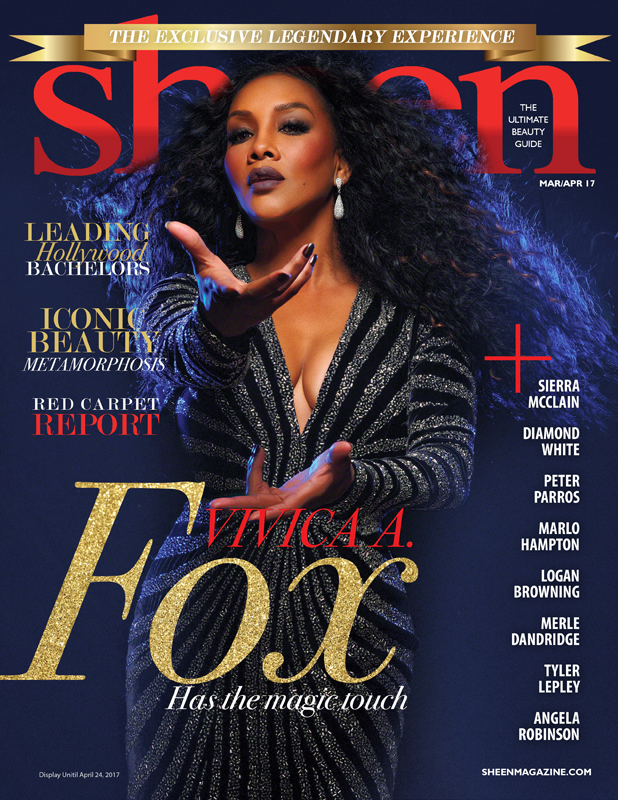 Our iconic cover girl & actress turned mogul, continues to bewitch us with her magic on the big and small screen, and reveals how after two decades later, she’s still on Top

Excitement is in the atmosphere as SHEEN MAGAZINE prepares for Legendary Weekend Experience – April 28-30, 2017 at the prestigious Marriott Marquis Hotel in Atlanta, Georgia. The Ultimate Beauty Guide pays homage to its prestigious annual event with none other than Legendary honoree and bonafide superstar, VIVICA A. FOX.

In the timeless issue, celebrating “Black Power Excellence,” actress, producer, and director, Vivica A. Fox reveals the magic to her success, her exciting directorial debut, inspirations, and how she still manages to stay on top after two decades, as one of the most sought after business women in entertainment.

“I just did my directorial debut. I directed a video for a new client that I’m working with name– Thomas Hobbs called “We On.” But in the future, I’d love to direct bigger projects, either television or movies. My two dream roles I’d love to do is direct the real Whitney Houston story, and I also want to work with Quentin Tarantino again and do what he did for Pam Grier with the movie Jackie Brown.”

The March/April issue gives readers an exclusive, red carpet report of some of the hottest hair, fashion, and beauty trends, all while featuring some of the most celebrated and breakout stars to date. This special celebratory issue also gives readers behind-the-velvet-rope access to the upcoming Legendary Weekend Experience; as it continues to expand every year with more celebrities, influencers, and simply lovers of SHEEN Magazine.

Hit the Floor star, Logan Browning shares her true meaning of beauty in an exclusive beauty spotlight. Celebrity hair maven, Takisha Sturdivant-Drew, talks working with Hollywood’s elite and her new hair line.  Hair stylist to the stars, Casamera Reavis III, dives into your hair questions for a fun Tress Relief edition. In addition, we’ve got the rundown on some of the top black beauty brands recommended by our readers as featured in Black Beauty’s Best.

Marlo Hampton gives us the inside scoop inside her new fashion line and emoji collection, and celebrity wardrobe stylist, Shatonia Amee, shows us a day in her glamorous life as a stylist. Actress on the rise, Porsha Ferguson slays spring looks for a garden party! And as you prepare for SHEEN’s Legendary Weekend, we’ve got you covered with tips on how to jazz up your wardrobe for one of the biggest events of the year!

Actress, Angela Robinson of the Have’s & Have Not’s, talks working with Tyler Perry, and leaving a legacy. Diamond White comes for the spotlight after last year’s big screen debut and new single. VP of Writer/Publisher Relations at BMI, Catherine Brewton, opens up about music and her non-profit organization. This issue’s Mandate belongs to none other than The Have’s and Have Not’s breakout actor, Peter Parros, who opens up about career expansion. Starlet, Sierra McClain breaks away from her sisters and finds her own Empire.

For a full list of honorees, schedule of events, and additional information on SHEEN Legendary Weekend, please visit: http://www.sheenmagazine.com/legendaryweekend/

Sheen Magazine is The Ultimate Beauty Guide for the modern day woman. The southern national lifestyle and beauty publication is the preeminent voice for the American beauty on new trends, techniques, and products. Sheen Magazine is a national and international distributed publication. Published bi-monthly, Sheen Magazine maintains its influence by always remaining current on what is happening and what is to come with beauty, fashion, hair, and entertainment. The publication seeks to cultivate, educate, and motivate its readers to their personal level of success and excellence. The Ultimate Beauty Guide and can be purchased nationally at Target, Wal-Mart, Walgreens, Books-A-Million, and Barnes & Noble. Visit us online at SheenMagazine.com and follow us on Facebook, Twitter, and Instagram @sheenmagazine.