CJ Faison serves as an Emmy-Nominated producer and professional giant slayer on the multi-award-winning digital series; Giants. Faison is responsible, in part, for 11 of the 13 Emmy nominations it received in 2019. Through his work, he’s changing the narrative in the African American communities by touching on issues of freedom, equality, creative expression and the importance of black excellence in TV and Film.

A native of Florida, raised in the inner city of Ocala, FL, CJ discovered his love for entertainment at an early age through involvement in sports and his elementary performing arts program. Faison was first exposed to performing when he got an opportunity to perform in Bob McGrath’s Sesame Street in addition to other plays. Faison’s company, FaceForward Productions’ mission is to create universal content in nature but focus on stories told by people of color from the perspective of people of color. The vantage points of groundbreaking stories are best told from individuals living them. As the entertainment industry shifts, FaceForward is looking to elevate the voices of those who are rarely heard by providing content that can be viewed across a diverse set of platforms.

CJ recently opened up about himself, his journey in the film industry and what led him to become an Emmy-nominated producer working on a multi-award winning digital series.

Tell me about your journey in the film industry and what led you to become an Emmy-nominated producer working on a multi-award winning digital series.

I have taken what many would describe as a very non-traditional role in the film industry. I started out working in corporate finance and very quickly discovered that this was simply not how I wanted to spend my life, it left me unfulfilled. So the vision came to me in a dream and it just felt so real. So I prayed about it and received so much confirmation the following day it was like God was speaking to me directly through close family and friends. With this confirmation, I started looking for acting classes in Indianapolis, IN, where I was living at the time. I didn’t find any classes but I found a play that was being cast at the world-famous, Madame CJ Walker theatre and I went in to observe the process of auditioning and casting and ended up actually auditioning myself and booking the lead role for Langston Hughes’ The Black Nativity. Atlanta was booming with production so I moved there to gain access into this very busy and competitive industry and worked on my first series with an amazingly creative, Chantel Johnson, entitled “Celibate In The City.” This was my first project and I directed, produced and acted in it. It was the confirmation I needed to know that for the rest of my life I wanted to spend time creating content but in order to do it at the highest of levels, I felt I needed to move to LA. So I moved to LA and connected with my big brother/mentor James Bland who told me about this series he was developing, Giants. I told him to let me know how I could help and he was kind enough to cast me in the first season. After seeing, how dope the show was I let James know that there were so many ideas I had for how we could elevate the production value of the show and extend it, he asked me to come on board and the rest is history! We made a successful TV series that started out on the web and now is broadcast on TV One’s CLEO TV and this past year was nominated for 11 Day Time Emmy’s, taking home two. So now Giants is an Emmy winning series! Just a humbling experience all in all and one that I am extremely grateful of. It’s a testament to the fact that God is able to do exceedingly and abundantly more than our hearts and minds can ever perceive. Our motto for the second season, was “God just surprise us!” and he surprised us and continues to surprise us over and over!

What has been the most rewarding part of your career thus far?

I think the most rewarding part of my career is the fact that I am able to wake up every day and do what I love and in doing that I am able to provide opportunities for other amazing artists and talents that may not always get the shine and opportunities they deserve. In addition to that, it means a lot to me to serve as a symbol of hope to the young black boys and girls that come from small places like I did. I grew up in a small city, Ocala, Florida, and didn’t realize that so much opportunity was available and now being able to show them that means all the world to me.

What are some of the ups and or downs of what you do?

I think the highest moments in what we do are seeing audiences react to content that you have created in a positive way because as filmmakers we are always worried that we are going to create something and nobody will care. The challenges of what we do is having an amazing story to tell and feeling like nobody gets it as you are searching for funding and attachments to make the production actually come to life. I don’t have many downs because I subscribe to a famous line from one of my favorite poems, “If” by Rudyard Kipling; “if you can meet with triumph and disaster and treat those two imposters just the same.” This is a line I do my best to embody and never get too high or too low, just adjust my sails to make the most of the winds that come my way. 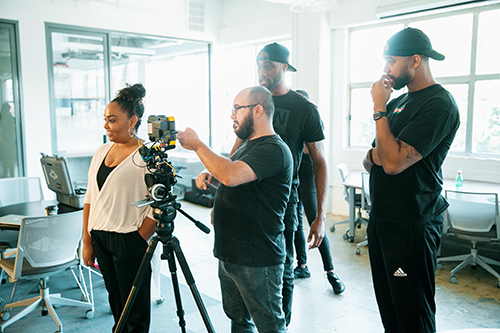 What new projects are you currently working on?

Currently, I am working on my lead feature film with an amazingly talented writer/director, Xavier Burgin. We both received Emmy Nominations for our work on Giants and are now developing his short film, On Time into a feature-length film. On Time is a story about a single mom who is living in South Central LA and finds herself battling homelessness and unable to land a job. She has to make the tough decision on a warm day in LA when she is late for a job interview to leave her daughter in the car while she goes in for a job interview, she gets to the job but comes out to what will be the start of an entirely different world of problems. The short film has been seen on HBO and Cinemax and has won a litany of film festivals. Recently, the feature-length script was announced as a quarter-finalist and this will serve as huge momentum while we work to secure funding and talent. I am very excited about this project because for once we get to see on screen the other side of the coin for moms that find themselves in these positions where they are in these catch 22 positions, but when we see it in the news and media we are often only given one side of the coin, this narrative offers the other side of that coin.

Share with me the importance of cultural representation, mentorship, and what it takes to make it in the entertainment industry.

I think cultural representation is extremely important especially when it comes to content. I think content is the one thing that we consume the most of outside of oxygen, so it’s very important we have true reflections of the culture present in film and media. It’s not enough to just have black and brown people on TV and Film if the characters they are portraying aren’t a true reflection of the culture. Mentorship is literally an essential thing in any industry and entertainment is no different. It is important to link arms with individuals who have gained knowledge from experiences that you may not have had yet or may not ever have. It’s also important that we share the knowledge we have gained with those who may not be where we are. It is this cycle that continues to allow the generation that is coming after us to start further ahead and go further than we will. The key to success in the entertainment industry is to be resilient, tenacious, unshakeable and hungry. Too often folks approach this industry for the wrong reasons and they quickly fizzle out. Yet for true artists that want to work in this space, you have to get started and keep going! 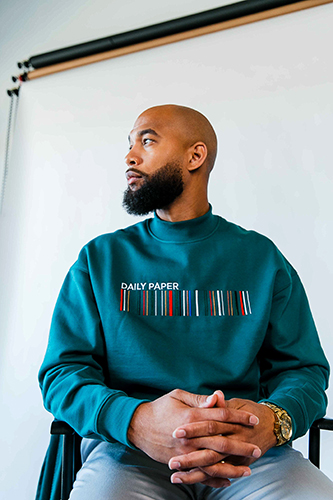 All images by Ken Irish