Melissa L. Williams Weighs In on Her Role on BET’s ‘The Oval’

Oklahoma City native, Melissa L. Williams is more than just an actress and model She is a woman who laid eyes on Shirley Temple and instantly knew she wanted to do it all just like her! We saw her in The Game, Hello Cupid 3.0, Poz Roz, and now we have the opportunity to fall in love even more in her latest project The Oval. Join in to our exclusive interview with Melissa L. Williams as she discusses her start in the entertainment industry, her exciting new role, and more!

I was introduced to the world of entertainment when I forgot my key after middle school one day. My mother told me to go down to my elderly neighbor’s house until she could get off of work. I sat down and my neighbor gave me an old-fashioned Coke beverage. She put on a Shirley Temple movie and I was mesmerized. I had never seen anyone like Shirley Temple: a young, multi-talented little girl who could dance, sing, and act.

I told my parents I wanted to do exactly what Shirley Temple did so they put me in tap, jazz and ballet classes. Shortly after, my stepdad got me involved in my first theater gig, which was an Easter play and I’ve been performing ever since.

Throughout middle and high school I was cast in several musical theatre shows, which led me to decide that I would major in theater in college. I attended Clark Atlanta University and studied under the late Carole-Mitchell Leon. My university theatre group, CAU Players, was where I really built my confidence and stage presence while performing musicals for the student body. I wanted to expand into television and film so I started doing local extra work. After I had an opportunity to be an extra on Tyler Perry’s Daddy’s Little Girls, I decided I wanted to give myself the opportunity to audition for speaking roles. Naturally, I moved to California. After I found my first network speaking job myself on BET’s The Game, I never looked back.

My experience on Bet’s The Oval was nothing short of phenomenal. First, Tyler Perry is a genius! He literally does it all, really well, and really fast! This experience really has prepared me for anything because with him being the writer, director, and creator of his shows, things could change at the blink of an eye and you would just have to be ready and open for those changes. It was a high to be surrounded by that level of greatness. Also, everyone at Tyler Perry Studios is so wonderful from casting to wardrobe, crew to makeup and hair. Everyone loves what they do, who they work for and is genuinely supportive.

I have some really good upcoming projects coming up. Of course, we know that The Oval on BET airs Wednesday, October 23rd at 9PM. I’m also attached to another high-profile series coming to BET, as well. I can’t say much, but it will totally be a game changer for the network! 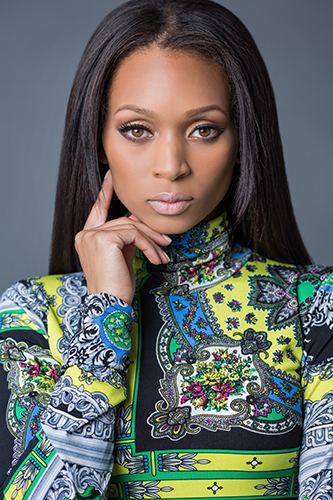 Be sure to tune into BET’s The Oval, premiering on Wednesday, October 23rd at 9/8C.

Stay connected with her by following her on Instagram today!

All images by David J Meister