R&B artist, Teenear captured our hearts back in the day when uploaded a music cover on YouTube and since then, we just haven’t been able to get enough of her. The Miami native’s musical journey is a true inspiration to those around her and all over the world. She’s worked with notable artists such as Sage The Gemini, Fetty Wap, and most recently, Lil Baby! We caught up with the young star to discuss her journey thus far, philanthropy work, and musical influences on her career.

Well, my name is Teenear and I was born and raised in Miami. Music to me really became love at the age of 13-years-old because that’s when I was trying to figure myself out. I remember one day, I was at school and my friends were always talking about Justin Bieber (when he first came out). I went home that night and looked him up to see what the hype was about. I saw that he was doing a contest for one of the records that he had out. I sat down and wrote and the process was so much fun to me. Creating something became something that I really enjoyed doing. I went to my parents about it and they encouraged me to publish covers on YouTube. The first cover I did was “Stay” by Rihanna and it gave me the courage to keep going.

How did you work up the courage to upload your cover performance of Rihanna’s “Stay” on YouTube? Did you know that it would become such a hit on the platform?

That was really just me stepping out on faith. I put myself out there, not knowing what kind of reaction I was going to get. It was a big faith moment for me. I was so happy to get positive feedback from my friends and family. I posted an audio version at first and once the label saw that it was growing on YouTube, they wanted to shoot an actual music video for it. I’d never recorded a music video before so it was a big moment for me, it was encouraging, so much fun, I really enjoyed everything about it.

You have worked with stars such as Sage The Gemini and Fetty Wap, Would you say there is an artist you’ve worked with or met that has left a special mark on you?

I would definitely say Sage The Gemini out of everyone. At that moment, I just started my career; it was my first single ever. He is such a genuine person and a positive spirit. Having that energy on my track is such an amazing feeling.

I loved it! It was a fun vibe! The song just makes you feel good. It’s mainly about finding someone that you have genuine feelings for. It’s about having fun and enjoying the moment. Working with Lil Baby was an awesome experience for me because we didn’t know who was going to be on the record at first. We didn’t want to rush anything but it was always a thought. One day while sitting at home, my sister mentioned Lil Baby. In my head, I thought about how big he is in the music industry, I didn’t think it would ever happen. Later on at the office, someone mentioned him again so we just tried to reach out. Immediately he said yes! He did the record two days later! I really appreciated it because he didn’t have to do it.

You are a philanthropist, why are you so dedicated to work with the American Cancer Foundation?

Honestly, I just like working with children. I’m a really family-oriented person so for them to allow me to come into the hospitals really warms my spirit. From now on, I just want to be able to share myself and talents with others and I look forward to doing more in the hospitals in the future. I want to help others in general and give them joy.

Tell us what we can expect to see from Teenear in the future?

A lot of music! I have so much music that I’m excited to share, hopefully soon! I will be getting a release date for my EP soon. In my music, you will definitely see a lot of who I am, I’m just excited to share what I love to do with others. 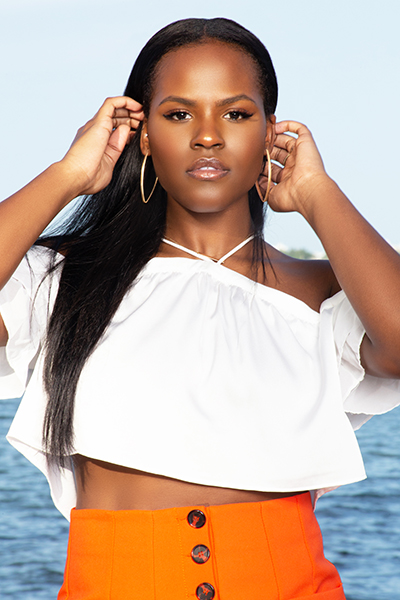 All images by Malik Alrahim | provided by Status PR