One Music Festival Unites All Generations Through Music, It’s truly “For the culture”!

One Music Festival Continues To Unite Generations Through The Love of Music!

One of Atlanta’s most talked about music festivals, “One Music Fest” returns next weekend, September 7th & 8th to Atlanta, Georgia to celebrate their 10th Anniversary at Centennial Olympic Park! One Music Fest is the perfect weekend vibes for R&B & Hip-Hop music lovers of all ages! The festival highlights the biggest legends in the industry and the hottest newcomers! The festival will feature 40+ performances, DJs, vendors, and 3 stages! This year’s festival will feature major artists such as Wu Tang Clan, Three 6 Mafia, DMX, Uncle Luke, Trick Daddy, Trina + many more! The millennials aren’t left out either because the biggest new heavy hitters in the industry will hit the stage such as; Teyana Taylor, Queen Naija, Summer Walker, Ari Lennox + many more! The lineup is ridiculous and will include surprise pop up performances from some of your favorite artists no matter the age or generation! We spoke with J. Carter the founder of OMF about how his vision came to life with a festival inclusive of all generations! Music transcends generations and OMF were able to unite music lovers of all generations through One Music Festival.

We moved the location to Centennial Olympic Park, an Atlanta staple that will provide a bigger space, surrounded by hotel accommodations, public transportation plus  much more! We also added a stage this year. We have 3 performance stages instead of 2. OMF Partnered with BMI for the 3rd stage that will feature Lloyd, Trindad James, plus more! There will also be 15 surprise pop up performances that aren’t on the line-up, they are heavy hitters too!

How were you able to create a lasting brand that is multi generational?

The plan was to create something for college students and older generations where everyone feels comfortable and can enjoy the festivities in perfect harmony. We were able to create a synergy between generations of music lovers by bringing classic and legendary artists to perform as well as the hottest newcomers.

How did OMF partner with FUBU?

27 years ago, Fubu was created and it really resonated with our audience as well. We are pure music lovers who wanted to give back to the culture which is very similar to FUBU. When our brands started crossing we had a quick convo and the partnership began there.

What’s the purpose of the Onefluence Event?

This is one of the many events that OMF will host! This event is a reception to be held next Wednesday by Esquire Branding Agency who’s running our influencer campaign. The event will open dialogue and conversation about the festival as well as connecting like minded individuals.

What are you hoping that the attendees will feel and say about the festival?

I want people to leave proud, charged up, proud of your music, and your culture. I want them to be influenced and to say “I’ve never experienced anything like this”! This festival unites super creatives, b boys, executives, politicians, dope boys, professionals, but all music lovers in one space, getting along in perfect harmony!  Everything is celebrated during OMF. This festival is truly “black, black” artists from all over participate,they hand make jewelry, tee shirts, products, visual art, and much more! It’s a true experience – all curated around the hip hop culture and generation!!! 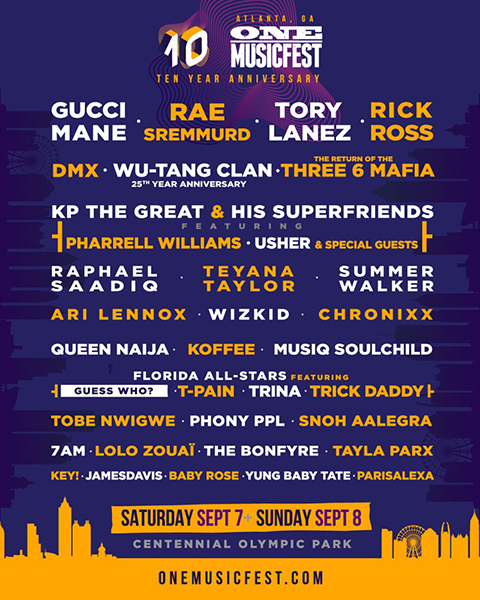