Darius Nix established the Friends in the City organization in November 2014, and the organization was officially incorporated as a 501c3 in January of 2015. Under his leadership the organization has provided after school mentoring programs for Chicago Public School District and Robbins-Posen School District. In addition to providing mentoring programs , Friends in the City Foundation has awarded scholarships and grants to high school seniors. Mr. Nix and his team successfully launched the ChiSTEM Summer Academy, providing STEM education for primary and middle school students on Chicago’s South Side.

Hosted by Friends in the City supporters Nichelle Benford and Kellie Woods, this soirée was mixture of prestige, sophistication and authentic praise for those who are truly dedicated to serving. During the gala, Darius Nix honored individuals who have inspired his work with the foundation. These are people who are helping to add change to the many socioeconomic issues plaguing Chicago’s south and west sides. The honorees were Maurice Perkins of Think Outside the Block NFP, Philanthropist Mechle Burtley, Urban Prep Academy’s Principal, Educator Christen Adams, John Lomax Foundation Founder Princess Lomax and Educator Zakiya Williams. The evening included an exquisite meal, great music and special appearances by elected officials as the room cheered for the individuals doing the work necessary to improve Chicago’s inner city communities. Darius Nix said he hopes his celebration allows for more people to celebrate the many individuals that are doing the work in our communities who aren’t big names. 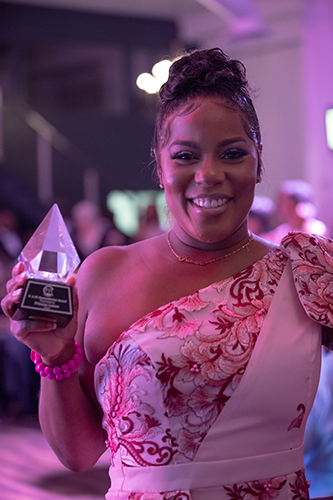 ”Chicago makes the news for all of our issues and the very present trauma that is here, but no one talks about the many people that are fighting for our neighborhoods. It isn’t just people like Chance the Rapper or Derrick Rose making a difference, but we have working professionals and business owners here alongside them giving back, too. That’s why this event is important to my team and I as we want the world to see how we are inspired by those individuals.”

You can support Friends in the City Foundation by clicking here!