We know and love Reed Shannon as one of our favorite Cartoon Network stars but did you know this sensation just released his debut R&B album? We caught up with the young rising artist to discuss his debut album, Soul Play and in addition, Shannon dishes all the details as he willl be headlining THE MINT this weekend!

Tell us about yourself and your start in the music industry.

My name is Reed and I’m 18, almost 19-years-old so I made it (laughs). When I was younger, I did musical theater in North Carolina where I grew up. I went on tour with Motown The Musical when I was 13-years-old. I toured around the country for about a year and half and then when the show came to Los Angeles, my parents and I decided that it would be cool if we came to Los Angeles to live life and get me started in the entertainment industry out here. Once we came here, we connected with people who saw me when I was on the show and met people who did all the things that I was interested in doing. I started recording immediately and I’ve been trying to do all I can to get my hands on the entertainment industry.

Can you tell us about your debut album, Soul Play?

Soul Play to me is an album that’s bringing real soul back to R&B. I feel like R&B sort of took a detour into hi-hop, which isn’t bad because hip-hop is great but I think that what I have to bring to the game is that Motown feel. You can feel every word that’s being said. There are live instruments, which I felt was super important because it brings another level of life to the project. When we recorded it, I was in this relationship where I was into this girl who wasn’t into me as much as I was into her. Soul Play was my chance to get all of that off of my chest just personally. The way that we did it was so that other people could feel how we were feeling in that moment.

What is your favorite song from the album? Why?

I think “Peace to Ego” is my favorite song. The song is sort of like an apology almost. It’s like I’m sorry for loving you with the part of me that has too much pride. The rest of the project is like I’m saying, this doesn’t feel right anymore. In “Peace to Ego,” I’m acknowledging the parts that I play in what didn’t work. I think it’s a super important message because I feel like when it comes to love in this new generation, we’re missing it because of people’s egos and people’s pride. The song sort of gives people that message that to love someone truly, you have to love them with yourself as opposed to your ego.

You’ll be headlining The Mint this Sunday, September 22nd. What can attendees expect to see?

I have a live band with me, I have dancers, it’s going to be super exciting because I am performing the whole project in addition to a medley of some fun songs. There will also be great artists including DanteThePoet, Presley Tenant, Tyler Reign, and Tim Johnson Jr. They’re amazing. DanteThePoet is from Lethal Weapon on FOX, Presley Tenant is from The Voice, Tim Johnson Jr. from The Four, and Tyler Reign won season four of The Rap Game. It’s just going to be a super fun show with amazing music. 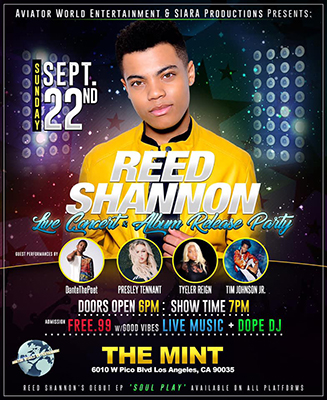 What can we expect to see from Reed Shannon in the future?

Everything! I plan on being on your screens, on your big screen, on your children’s cartoon, your favorite cartoon, and you will hear much more music from me because music runs through my blood. I’m doing comedy so you will see me on stand-up stages everywhere! 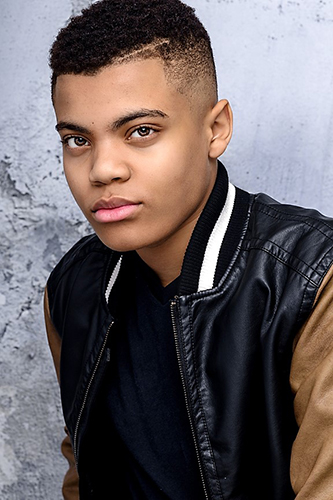