Refinery29’s Senior Editor, Lexy Lebsack Opens Up About Traveling the World to Explore the Beauty Industry!

On her mission to travel the world to explore the beauty industry in different cultures and commerce, Lexy Lebsack hosts an investigative web series titled, Shady to discuss those topics we often wonder about but never ask. The popular series is a true eye-opener and covers topics ranging from brands capitalizing on the trend of “natural products” and the dangers of wearing makeup in North Korea. We caught up with Lexy to discuss who she is beyond the camera and the overall mission in Refinery29’s hit beauty YouTube series, Shady.

My name is Lexy Lebsack and I’m a journalist living in Los Angeles. I’ve spent the past 4 years working for Refinery29, first as its Los Angeles Editor, then West Coast Beauty Editor, now Senior Beauty Editor. While covering beauty I co-created the web series, SHADY, which investigates the culture, commerce, and controversy surrounding beauty and appearance. It’s allowed me to travel all over the world and uncover things I never expected, from child labor connected to shimmery makeup to injustices happening to women in prison. For our second season, I also moved into a producer role on top of hosting, and I also write a feature to accompany each video.

Before my time at R29 I was the founding editor of Byrdie.com and wrote for Women’s Wear Daily, Violet Grey, Los Angeles Magazine, Vox Media, and more.

The goal of SHADY is to inspire our viewer/reader to think about beauty in a different way. I want our reader to question the industry, our beauty ideals, and why we do and believe the things we do. The beauty industry is underregulated and rapidly growing, so investigations over its common practices are very necessary right now. But we also use SHADY as a Trojan horse to talk about bigger social justice issues, from the treatment of women in North Korea to resources for women experiencing homelessness, all packaged around beauty.

How would you describe your overall experience hosting Shady thus far?

My background is in writing and reporting, so co-creating, co-producing, and hosting SHADY has been a life changing experience for me. It’s opened my eyes to a new side of media, but it also showed me that young women are hungry for a deeper look at the topics that impact them most.

Is there one project you could tell us about that you’ve worked on that has really moved you?

Our first episode of season 2, an investigation into how the cosmetics industry sources its mica in India, changed me in a truly profound way. As soon as I discovered that the shimmer in my makeup could have been mined by a child I knew we had to investigate the topic. It’s made me think critically about everything I buy and how our products are so often subsidized by work in the developing world.

What can we expect to see from Lexy Lebsack and Shady in the future?

I’ve grown a lot from season one to two and so I hope that continues into the future! Hopefully, we have many more investigations to come! 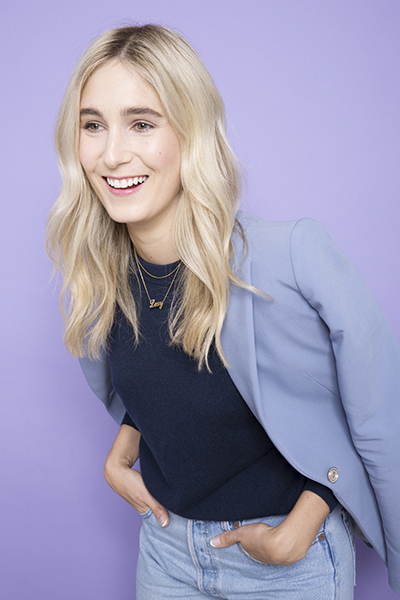 All images by Refinery29 | provided by Rubenstein