She was born in Brazil, but more importantly, Gabby Bueno was born into a family of talent. Born as an only child in Goiania, Brazil, Gabby B was born to a mother who was a “Samba” dancer / instructor and her father, a Master Caporia Instructor. Gabby B began her life traveling the world with her parents who traveled for their jobs, living in France at just three years old in which she settled for a long period. Watching her parents closely, Gabby eventually became one just like her parents and soon developed a love for the arts While on the road Gabby began to learn the Brazilian dance, Axé, instructed by her mother. Gabby developed her dancing skills quickly, practicing and learning directly from a professional. Gabby even went on to incorporate her knowledge of Capoeira, to discipline her body and further perfect her skills.

Gabby was on the path of success even as a kid and made her stage debut in France. As just a child, Gabby performed in the play of Shrek and participated in talent shows. It was clear that she aimed to be a performer, and wouldn’t stop to make her dream come true. At just the young age of 11 years old, Gabby learned just how powerful a singer she was. Singing Whitney Houston at such a young age- but it was what she did, and she did it amazingly. While in high school in America, Gabby went on to join the cheerleading team in which she shined like a true star. Gabby showcased her dancing skills on the team and stole the attention of everyone that watched her. It was clear that Gabby was something special, and she surely knew how to captivate a crowd. 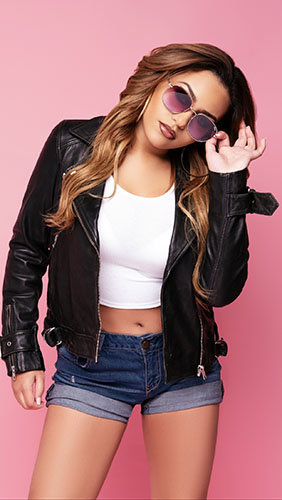 Now that she is 19-years-old, Gabby has taken her dream of being a performer and has taken it a step further. Now a singer, Gabby has released music with singles “Under My Skin,” “Receipts” and “Till The Sun Turns Up.” Her background being tied to Brazil, France and English are very clear in her musical style and persona. Calling herself the Brazilian Barbie, she is incorporating that culture with the culture of American music to make her style. With her international flavor, it makes for a fresh and vibrant artist that the world will love.

Gabby is currently working on her newest song and release for “Come Te Llamas,” her first song that incorporates English and Spanish vocals, coming in October. She also revealed that she will be putting out an EP shortly at the beginning of 2020, with a unique mixture of several different types of music. On her EP will even be a Portuguese song written by her own mother that she has been singing since she was just 7-years-old, bringing a great sense of sentimental value to the mix. A fan of pop music dating back to the early 2000s to the biggest current superstars such as Beyonce, Gabby is looking up at some of the most successful artists ever. Taking inspiration from them, Gabby is sure to give the world a style of music that will set trends in the future.

It’s only a matter of time before Gabby is a household name.

All images by Mitch Adelstein