Powerhouse Vocalist, Sheléa has proven time after time that she’s a force to be recokcned with. With her high class and soulful voice, her fans adore her for her true form of artistry. Lately, the sultry artist is touring internationally with the Seattle Symphony and Naples Philharmonic and she is even starring in Lifetime’s biopic based on the Clark Sisters. We caught up with Sheléa to discuss all the exciting details.

How would you describe your musical journey thus far?

It’s been a lot of highs and a lot of lows (laughs). It’s been so fulfilling and I would say its been a journey to finding my true self.

Give us all the deals on your new music.

Well, I just released an album called Pretty World: Bergman Tribute Album (Alan and Marilyn Bergman) a few months ago. It’s like a love letter to them and all their songs. There are 12 songs they handpicked for me, some that were never released. Stevie Wonder is on it, Kirk Whalum, Greg Phillinganes (who has worked with Michael Jackson). I’m working on a Christmas EP that includes five songs. This month I will be releasing an original single. Next year, I’m going to be releasing new music. I would categorize it as soul/R&B.

Tell us about your role in The Clark Sisters biopic.

I just filmed this biopic. It’s called The Clark Sisters: The First Ladies of Gospel. I play Dorinda Clark-Cole, one of the sisters. It’s so amazing because I grew up not only listening to their music but I also loved Dorinda Clark-Cole as an artist. It’s pretty amazing and full-circle to be able to play her as a character.

SHEEN Magazine is the Ultimate Beauty Guide for the Modern Day Woman. Do you mind sharing your holy grail beauty product?

Edge control! Getting those edges smooth is key (laughs). I love Creme of Nature’s Edge Control. I also love DevaCurl B’Leave In.

Hopefully a lot more acting and singing, and of course more touring! 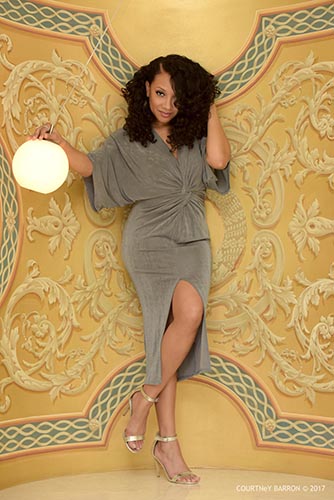 All images by Courtney Baron